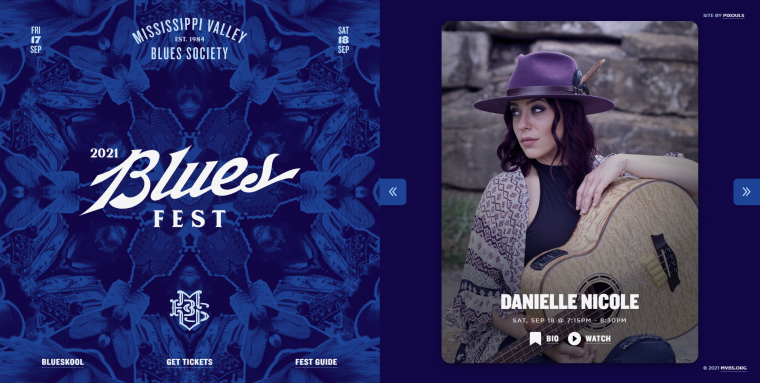 DAVENPORT, IOWA (September 6, 2021) — The Mississippi Valley Blues Society is proud to welcome Danielle Nicole to Blues Fest 2021. The first woman to win the Blues Foundation's 2014 Blues Music Award for Best Instrumentalist — Bass. Nicole’s show, style, and tone are all her own and can only be experienced!

Founding member, lead singer, and bass player of internationally-acclaimed Blues/Rock band Trampled Under Foot, Danielle Nicole Schnebelen stepped out on her own in 2015 with her début album Wolf Den. In 2018, Nicole returned with a follow-up release via Concord Records entitled “Cry No More,” garnering a 2019 Grammy Nomination for Contemporary Blues Album and two Blues Music Awards for Bassist and Female Contemporary Artist among a slew of Blues Blast Music Awards and three Independent Blues Awards.

Nicole's “distinctive, inventive bass work is the product of years of intensive roadwork; and although her voice draws comparisons to artists such as Susan Tedeschi, Bonnie Raitt, and Etta James, it is only the feeling in which she will invoke those memories.”

By Nicole’s side is her founding guitarist Brandon Miller of Kansas City and drummer Cameron Tyler currently hailing from Las Vegas.