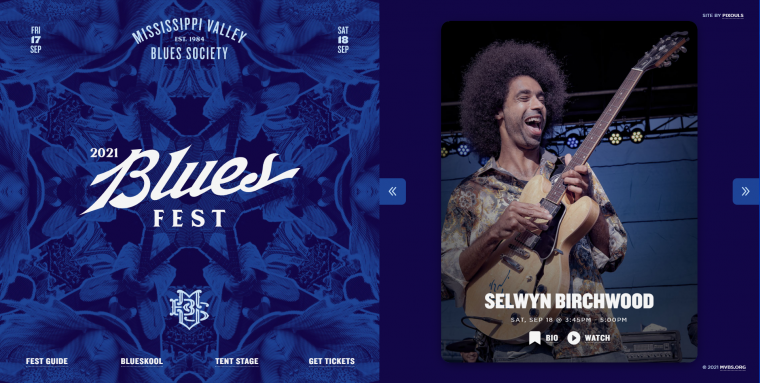 DAVENPORT, IOWA (September 13, 2021) — The Mississippi Valley Blues Society is proud to welcome lyrical and musical master storyteller Selwyn Birchwood to Blues Fest 2021. Birchwood puts his own fresh spin on the blues, taking the tradition and making it into something new.

“With my music,” says groundbreaking young blues visionary Selwyn Birchwood, “I tell my stories in my own way, with my own voice. You won’t ever hear me on stage telling someone else’s stories. Muddy Waters, B B King, and John Lee Hooker all told their own stories. That’s what I’m doing.” The young guitar and lap-steel player calls his original music “electric swamp funkin’ blues,” defined by raw and soulful musicianship played with fire-and-brimstone fervor. His soulful vocals draw his audience deep inside his unforgettable tales of love, passion, pain, and pleasure. Living Blues says, “Selwyn Birchwood is an impressive, hard-crunching, modern blues guitarist. His fretwork is high-energy, raw, and vivid. . . knife-edged leads and roadhouse-rattling grooves. He is graced with a depth and maturity that would be impressive in a grizzled veteran, let alone a fresh-faced young man.”

No other band on the current blues scene is built quite like Birchwood’s. In addition to Selwyn’s electrifying guitar and lap-steel playing, the other featured instrument is Regi Oliver’s baritone sax. The group is rounded out by bass, drums, and newly-added keyboards. “With the keyboards,” Birchwood says, “it’s like we’re a whole new band with a bigger footprint — I can really stretch out on guitar while still featuring the baritone.” With his band feeding off his energy, the 6’3” musician with his trademark Afro roams the stage (often barefoot), ripping out memorable guitar licks with ease, his soulful, rocks-and-gravel vocals firing up the crowd, making them feel as if they were in his living room. His ability to win over an audience — any audience — is proven night after night on the bandstand. With his warm, magnetic personality, Birchwood is as down-to-earth as his music is thought-provoking and vital.