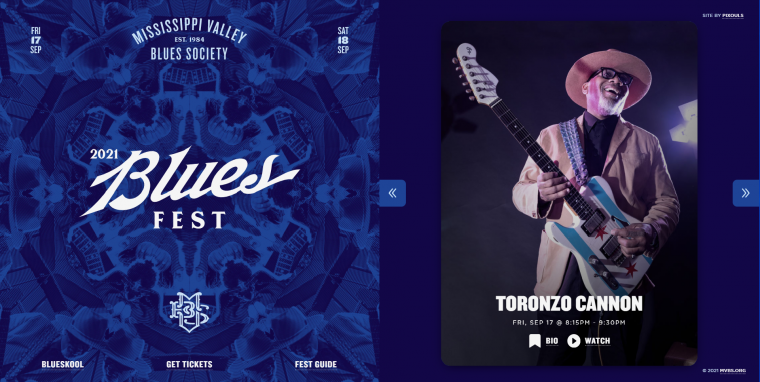 DAVENPORT, IOWA (August 31, 2021) — The Mississippi Valley Blues Society is proud to welcome Chicago bluesman Toronzo Cannon to Blues Fest 2021. The blistering guitarist, soulful vocalist, singular songwriter, and city bus-driver is one the most electrifying bluesmen to emerge from Chicago in decades. His live performances unfailingly earn him heaps of critical praise and hordes of wildly enthusiastic fans from all over the US, Canada, Europe, and Japan.

Toronzo Cannon was born in the Windy City on February 14, 1968, and grew up in the shadows of the notoriously-tough Robert Taylor Homes. Theresa’s Lounge, one of the city’s most famous South Side blues clubs, was nearby. As a child, Cannon would stand on the sidewalk outside the door, soaking up the live blues pouring out while trying to sneak a glance inside at larger-than-life bluesmen like Junior Wells and Buddy Guy. He also heard plenty of blues growing up in his grandfather’s home and listened to soul, R&B, and contemporary rock on the radio.

Cannon bought his first guitar at age 22, and his natural talent enabled him to quickly master the instrument. Although his initial focus was reggae, he found himself increasingly drawn to the blues. “It was dormant in me. But when I started playing the blues, I found my voice, and the blues came pouring out.” He absorbed sounds, styles, and licks from Buddy Guy, Albert Collins, Hound Dog Taylor, B B King, Albert King, Freddie King, Jimi Hendrix, J B Hutto, Lil’ Ed, and others. Although influenced by many, Cannon’s biting, stinging guitar sound is all his own.