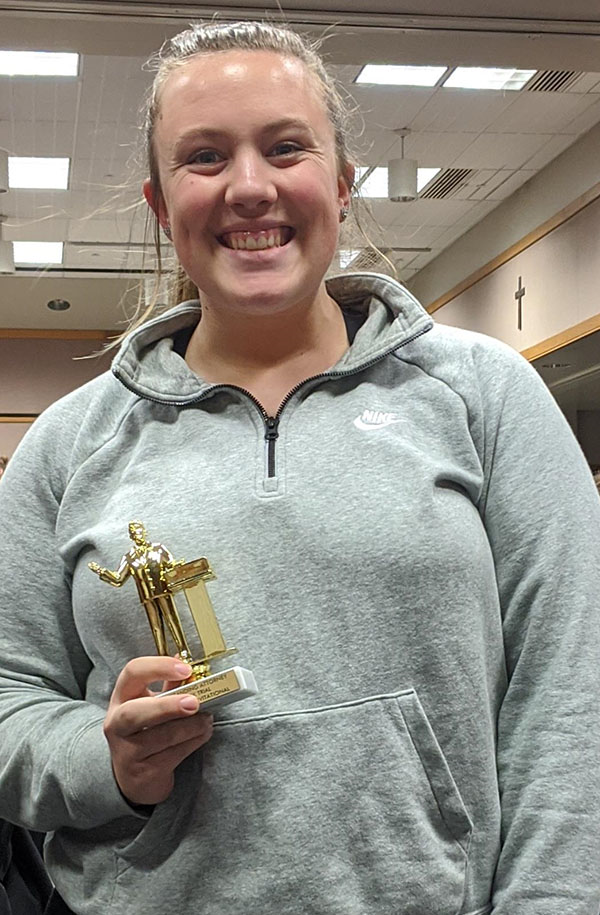 FAYETTE, IOWA (February 13, 2020) — The Upper Iowa University (UIU) Mock Trial team recently competed against 45 other collegiate teams in the 32nd National Mock Trial Invitational at Loras College in Dubuque, Iowa. Following the event, UIU junior Payton Kastenschmidt was named an Attorney Award recipient. A native of Brandon, Wisconsin, she is majoring in biology, with a minor in prelaw. Kastenschmidt joined the UIU Mock Trial team last school year when contemplating whether to pursue a career in medicine or law.

“I've learned so much from the coaches as well as from other team members,” Kastenschmidt said. “Mock Trial has helped me become confident when speaking in front of people as well as presenting more clear and concise arguments. I have loved the entire experience and would like to go to law school and focus on civil litigation.”

“It’s a privilege to compete against these teams and work on our trial skills,” Tiffany Kragnes said. “Chris and I have seen significant improvement from these students, which culminated into some great performances. The team takes suggestions from the judges and incorporates them immediately into the next trial. While our returning members continued making strides in their performances, it has been especially fun to watch the growth of our first-year competitors. The team worked together all season long, ensuring a strong base for next year.”

About Upper Iowa University Founded in 1857, Upper Iowa University is a private, nonprofit university providing undergraduate and graduate degree programs to about 5,200 students — nationally and internationally — at its Fayette campus, 21 U.S. locations, as well as a location in Hong Kong. Upper Iowa University is a recognized innovator in offering accredited, quality programs through flexible, multiple-delivery systems, including online and self-paced degree programs. With a focus on developing leaders and lifelong learners, UIU provides dual-enrollment programs for high-school students as well as continuing education and professional development opportunities for learners of any age. For more information, visit uiu.edu.