MUSCATINE, IOWA (November 29, 2021) — In 2020, the Muscatine Public Art Advisory Commission announced a Request for Qualifications, seeking artists to prepare concepts for public art in the roundabout at Mulberry and Second. Seventeen artists from Iowa and throughout the United States responded to the RFQ. After consulting with City departments to help ensure that each artist was capable of carrying out a large-scale project, the Advisory Commission selected three artists: Daniel Miller of Iowa City; Nathan Pierce of Cape Girardeau, Missouri; and Greg Mueller of Lutsen Mountain, Minnesota.

“The Advisory Commission carefully reviewed the materials submitted by the artists,” explains Melanie Alexander, City staff liaison to the Public Art Advisory Commission and Director of the Muscatine Art Center. “We were looking for artists with a record of successful public art commissions and with the ability to create something unique for Muscatine.”

The applicants provided information about themselves, examples of their completed projects, and a statement explaining their interest in the project. “This project is one of the first managed through the Public Art Advisory Commission,” states Alexander. “It was critical that the selected artists have the capabilities to carry out a project of this scale and complexity.”

All three artists have completed multiple public art projects. Mueller received his MFA in Sculpture from Montana State University School of Art. He has held several academic appointments and has exhibited throughout the Midwest. Daniel Miller is the Program Head of Sculpture and Intermedia at The School of Art and Art History at University of Iowa. He earned his MFA in Time Arts from The School of The Art Institute of Chicago. His works have also been shown in solo exhibitions in Illinois and Rhode Island and in group exhibitions throughout the United States and in South Korea and China. Pierce received his BFA in Sculpture from Southeast Missouri State University. His work is held in collections or installed in public places in Florida, Indiana, Georgia, Missouri, South Dakota, Illinois, Wisconsin, Nebraska, Alabama, Kansas, and Canada.

The three selected artists participated in an online meeting in May 2021 and worked on their proposals through summer 2021. A stipend of $750 was paid to each artist, and a grant from the Community Foundation of Greater Muscatine provided the funds for the stipends.

Each artist provided a detailed proposal including the inspiration for their concept, concept drawings, a detailed budget, dimensions and materials for the piece, and a list of other concerns such as lighting and mounting. 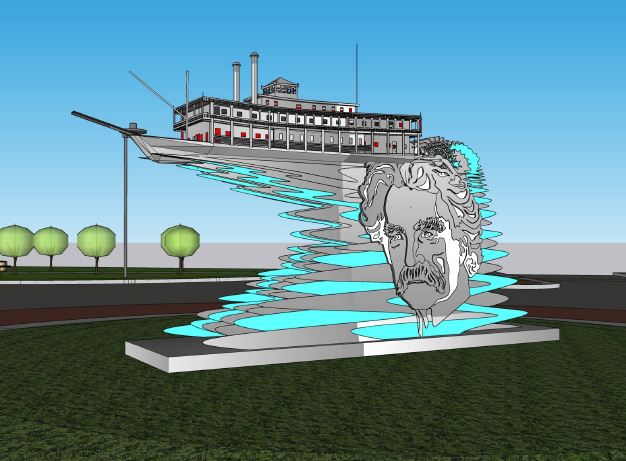 The three artists all found inspiration in Muscatine’s relationship to the Mississippi River. Greg Mueller and Daniel Miller both referenced Mark Twain with Miller incorporating Twain’s bust into his piece while Mueller drew on Twain’s quote about the sunsets in Muscatine. Miller’s concept also integrates a steamboat and a series of buttons along with the flow of the Mississippi River. Mueller researched the name “Muscatine” and found that the name means “island of fire” in Native American language. For Nathan Pierce, his life on the Mississippi River in Missouri made the creation of his concept, “Zenith,” especially meaningful. 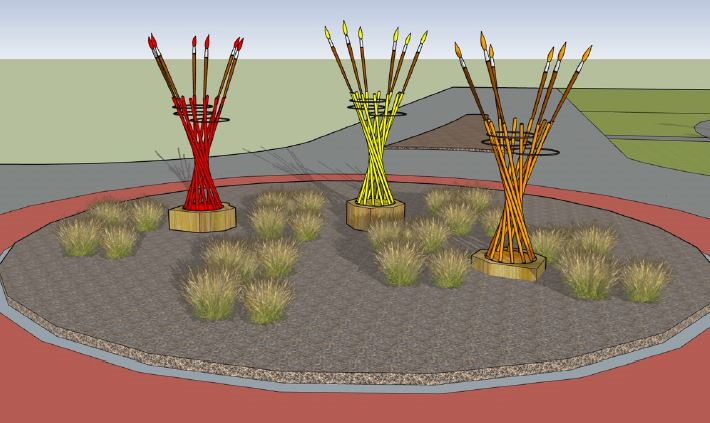 The first opportunity to vote on the concepts took place during the IDEAdash events on November 16.

The community is invited to provide feedback through January 10, 2022. The online survey can be accessed at https://www.surveymonkey.com/r/HSCR6SF. In-person voting will take place at the Musser Public Library and HNI Community Center, the Muscatine Art Center, and Sunrise Galleries from December 1 through January 10. The online survey provides details about each artist and the proposed concept. Posters at the in-person sites also present this information.

Questions regarding the public art concepts for the roundabout may be directed to the Muscatine Art Center. Please call 563-263-8282 or e-mail Melanie Alexander at malexander@muscatineiowa.gov.