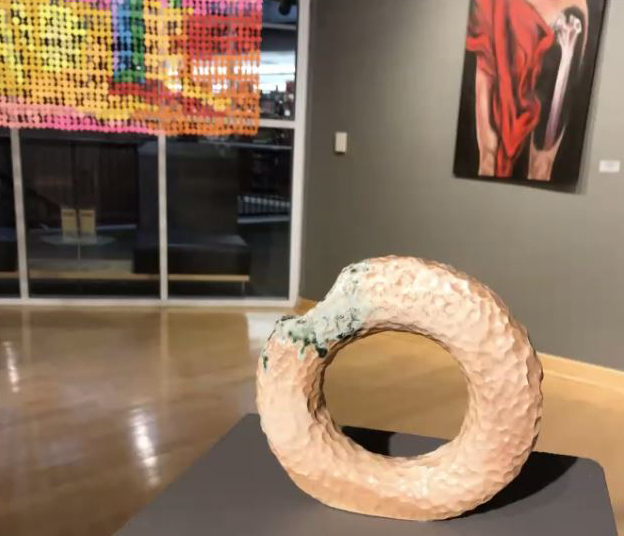 MONMOUTH, ILLINOIS (April 20, 2021) — The three artists featured in the final exhibit of the academic year at Monmouth College have become good friends.

Senior art majors Ryan Dawson of Monmouth, Miranda Pasky of Paso Robles, California, and Rebecca Quick of Moline, Illinois, are featured in the annual Senior Art Exhibition in the Len G Everett Gallery in Hewes Library. Their works will be on display through May 5, the College's final day of spring semester classes.

During a Zoom presentation for a monthly program sponsored by the Buchanan Center for the Arts in downtown Monmouth, the artists said they have become accustomed to supporting and encouraging one another throughout their time as Monmouth students. Dawson even went so far as to create a piece for the exhibit that symbolizes their friendship. The suspended work features three connected circles, representing the three artists.

Dawson specializes in ceramics, glaze chemistry, and photography, but said that ceramics was his "love child." He experiments with different types of firing techniques and attempts to create different textures, such as one piece with driftwood qualities. He often uses the form of a circle in his work to represent eternal and spiritual themes.

Pasky has found a focus for her artwork after admittedly being "all over the place" in her first creations. In her paintings, she now tries to incorporate symbolism, "expressive" brushwork, and portraiture, which can all be seen in one of her exhibited pieces, “Casting Away.”

Dawson and Pasky are also studying business, while Quick has added a major in mathematics. Quick's works show off that logic-versus-creativity, left-side-versus-right-side-of-the-brain dichotomy. She takes an image, such as a portrait, and then pixelates it and creates an image using 1-inch-by-1-inch origami squares, which she connects with fishing line.

"The planning stage is very hard, but making the art is easy," said Quick, who said her 72-inch-by-72-inch work, Metamorphosis is made up of 1,300 origami pieces.