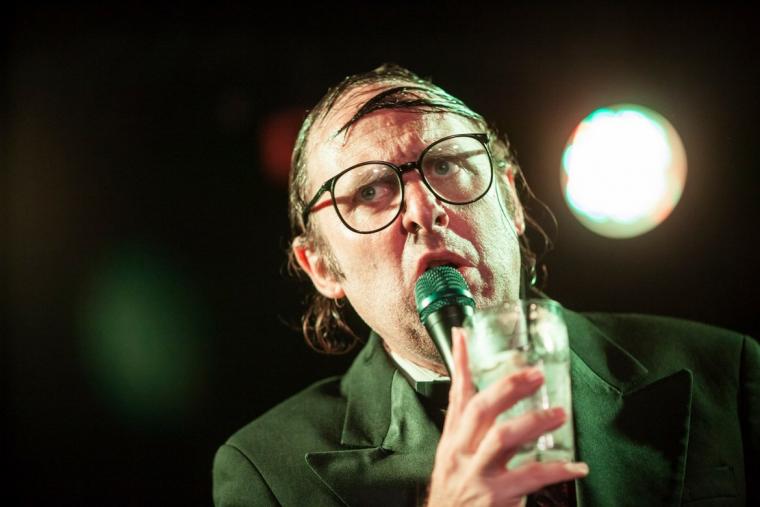 Neil Hamburger (the alias and firmly in-character persona of comedian Gregg Turkington) has been trolling audiences and defying easy categorization for nearly three decades. Starting off as a prank-phone-call project circa 1992 and escalating into a virulently bizarre and misanthropic live-comedy persona over the years, Turkington’s act finds him dressed up like a disgruntled lounge singer and thrust into some of the most awkward on-stage appearances imaginable. Hamburger defines one branch of “anti-comedy” in all its most despicable and digressive tendencies as he heckles his audience, goes off on inscrutable tangents that no one could possibly relate to or understand, and toys with celebrity and cultural references that have been out of style for the entire lives of the people listening (and/or himself).

The whole thing is purely hit or miss depending on the disposition of whomever is forced to encounter him. This writer, for one, finds him to be a totally unique talent and has followed his work for years – through a career which has seen higher visibility recently with movies such as 2015’s Entertainment and a consistent appearance with Tim Heidecker within the mind-destroying “extended universe” of the On Cinema franchise. But any conception of Turkington as a unique talent comes bundled with the knowledge that what he does, especially within the character of Neil Hamburger, is undeniably alienating and often requires one to accept the role as the butt of a joke that has no meaning other than absurdity.

Turkington has recently been refining another layer of his character with a series of more overtly musical projects released through legendary Chicago-based label Drag City. Presented in the same context as iconoclastic singer/songwriter mavericks such as Will Oldham, Bill Callahan, and Jim O’Rourke, the presence of Neil Hamburger in the Drag City catalog makes a backward kind of sense. Here is a man who completely inhabits the role of the unreliable narrator of his own experience, singing twisted lounge-music songs from the perspective of an exaggerated character who comes to life in a more direct and confrontational fashion than any character born within the pages of a post-modern novel. At its core, the “music” of Neil Hamburger attests to a deep love of the baroque pop styles from the '50s to the '70s – the kind of pop frosted to the gills with Pet Sounds studio flourishes and schmaltzy Harry Nilsson piano progressions, with vocal harmonies straight out of The Zombies Odyssey and Oracle and old-school-country guitar figures. Even with all these details to be found in his recent musical output, one still can’t help but imagine that a live Neil Hamburger set in the relatively small confines of the Triple Crown will veer dangerously off course into the realm of awkward nonsense comedy – but at the end of the day, this is the only logical route for him to take.