It Ain't Over Until Fats' Ladies (and Gentlemen) Sing: “Ain't Misbehavin',” at the Timber Lake Playhouse through August 29 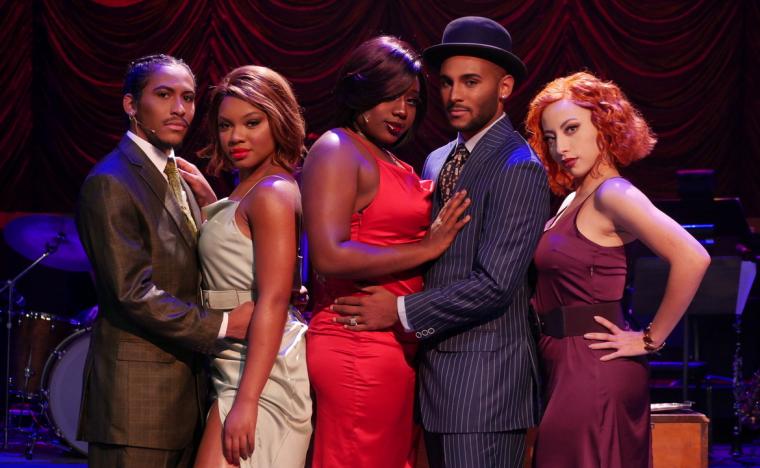 The joint was really jumping at the Timber Lake Playhouse on Friday as the company presented its rendition of Ain’t Misbehavin', an energetic tribute to the songs of Thomas “Fats” Waller.

Directed and choreographed by Donterrio Johnson, this musical revue has a book by Murray Horwitz and Richard Maltby Jr., with tunes by various composers and lyricists as arranged and orchestrated by Luther Henderson, and it's set in the 1930s, when Manhattan nightclubs including the Cotton Club, Savoy Ballroom, and Waldorf were the playgrounds of the high society. The overall feel of the evening’s festivities was that of a cabaret, with Matt McClure's set designed to look like a smoky nightclub with round side tables covered in white tablecloths. Michael McBride, the keyboard player and music director, was seated at his piano in a sunken circle carved out in the middle of the stage, and there was an extravagant structure that resembled a marquee that was lit up and framed the stage.

Ain't Misbehavin's band was seated upstage and elevated underneath a beautifully fancy ruby-red curtain. And those musicians were outstanding, treating us all to a big-band sound complete with drums/percussion (Ben Heppner), bass (Deana Deal), reeds (Cathy James), trumpet (Jon Rarick), and trombone (Joe Titus). At times, the musicians also clapped along to the songs.

Timber Lake's latest boasts five cast members, and their characters are listed in the program, and during Friday's show they introduced each other using their real names. The performers present an evening of rowdy, raunchy, and humorous songs that capture the different moods of the era and reflect Waller’s view of life. Autumn Key, as Nell, was phenomenal, and I especially enjoyed her number “I’ve Got a Feeling I’m Falling.” She was super-sultry and sexy, and as outfitted by costume designer Damarius Kennedy, Key was decked out in a well-fitted, silky, red dress with a large flower in her hair. Key also wore sparkly, bright-red eyeshadow and had a sassy haircut. Kudos to hair and makeup designer Corey Cochran.

Ciarra Stroud, as Armelia, was equally talented and feisty in her song “Squeeze Me,” and I loved her wavy red hair. (I honestly couldn’t tell if it was a wig or her real hair, but it appeared to be real, and it's gorgeous.) Nissi Shalome, as Charlaine, showed off her strong soprano voice in a glass-shattering moment with her song “Yacht Club Swing.” Eli Nash, as Andre, was incredible, and he definitely seemed comfortable in this genre. Nash is quite a fantastic dancer, as he performs high-split jumps while touching his toes in the song “How Ya Baby.” He was also brilliant in his execution of the number “The Viper’s Drag” as he tokes on a joint while slinking around the stage.

And rounding out the cast is Cory Shorter as Kell. He did a great job making eye contact with patrons, as well as playing to different sections of the audience, but at times, his vocal performance seemed a bit pitchy. That being said, I felt like most of the songs in this show would be difficult for any singer, as they require a very wide range, and frequently go from low notes to high ones quickly.

The gentlemen’s costumes boasted smart pinstripe suits, vests, ties, and derby-style hats, but all of Kennedy’s costumes were well-fitted and era-appropriate in their vibrant colors and designs. And to highlight those costumes, Rob Littlefields’s lighting was beautiful, with purple spotlights shrouding each individual performer. At one point in the evening, the spotlights began roving through the audience as well, which was a nice effect.

I particularly enjoyed the three ladies in their comedy number “Fat and Greasy” as they dressed up like men and wore mustaches. In turn, the guys portrayed women as they donned blonde wigs for their performance of “Find Out What They Like,” explaining the “right way” to please a man.

At times, for me, the show did drag a bit because many of its numbers sounded alike and featured similar choreography. But I applaud the entire company for putting together a first-rate show that was very entertaining, with Johnson's five ensemble members harmonizing nicely while pouring out their collective heart into every piece they performed. Delivering a total of 25 songs and a spectacular finale, I’d say this cast worked their tails off to bring the audience a fabulous and memorable tribute to Fats Waller with Ain’t Misbehavin’.