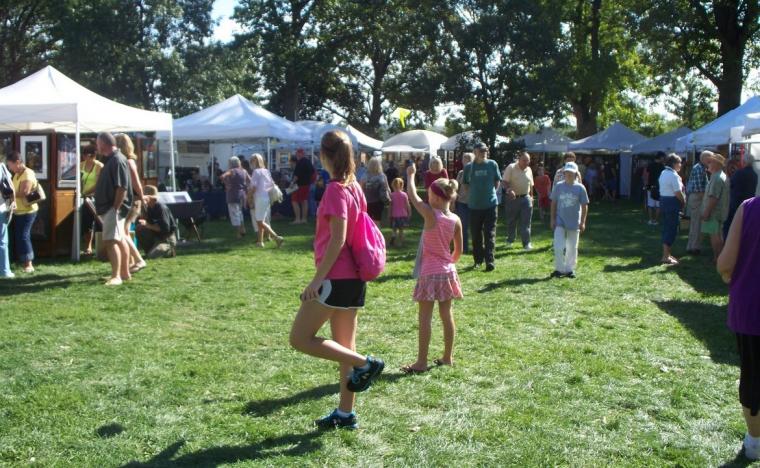 Riverssance Festival of Fine Art at Lindsay Park -- September 21 and 22.

Original works from more than 90 juried regional and national artists, children's activities, a Tabor Home Winery tasting, gourmet food, live music, and additional treats will be on hand at the September 21 and 22 Riverssance Festival of Fine Art, with MidCoast Fine Arts' 32nd-annual Lindsay Park event finding Terry Rathje this year's recipient of the esteemed Harley Award, which honors those who've positively affected the visual arts and artists in the Quad Cities during their lifetimes.

An original member of the MidCoast Board of Directors, Rathje contributed to many of its art programs and was involved in the development of Bucktown Center for the Arts as a unique nexus for artists’ galleries/classrooms/ studios. (He also designed the building’s exterior graphics.) As a sign of his esteem in the Quad Cities' visual-art community, Rathje, in 2013, was one of the first local artists to have a solo show at the Figge Art Museum, and he's known for his collaborative spirit in working on creations with others, even in such far-off locations as Suriname.

Rathje notes he “grew up in a small town in Eastern Iowa and to fight off boredom, found promise in art making at an early age.” He proceeded to serious exploration of drawing, then painting, leathersmithing, darkroom and digital photography, printmaking, animation, sculpture, and assemblage. He attended high school in DeWitt, followed by the University of Iowa, Marycrest International University for his BA, and back to the U of I for an MA and MFA. Rathje ran a graphic-design and sign-painting business for 15 years, and then shot and edited video and designed graphics for video for another six years in the corporate world. He retired from Western Illinois University where he taught for 18 years, reaching the level of associate professor of graphic design. Nowadays, Rathje's time is spent living along the Wapsipinicon River and making wood sculpture.

The artist's current work falls into four categories: assemblage, sculpture, furniture, and nomadic architecture – structures that can be assembled in one location then disassembled and moved to another. Rathje's explorations include use of industrial, recycled, and sustainable materials, 3D modeling, and developing new techniques of construction using digital technology, all while tying these methods to traditional ones. He has exhibited throughout the country and also abroad in countries including Brazil, England, Portugal, Turkey, and Suriname. Rathje states, “The eye is the place where the outside world meets the inside world. It is the interaction between the two, influenced by experience, genetic propensities, and imagination that generates work that hopefully ignites and unites those who are paying attention… and we all should be.”

Rathje will receive his Harley Award at a 5:30 p.m. public ceremony on September 21, and local musicians performing over the weekend include Whoozdads?, the Barley House Band, and David G. Smith on Saturday, and Lojo Russo, Songbird Quartet, and Lewis Knudsen on Sunday. In a new Riverssance addition this year, a series of artists will be demonstrating their talents in or near the food tent, with the current lineup boasting collaborative sculpture by Steve Banks, Heidi Hernandez, and Haley Award recipient Rathje; ceramics by Carolyn Krueger; dinosaur drawing by Josh Malone; printing by Karen Blomme; and hotwire Styrofoam sculpture by David Schaeffer.