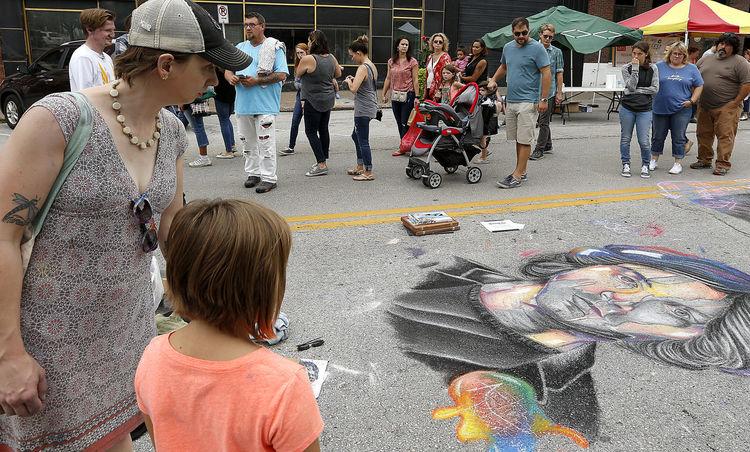 On August 25, a quartet of art in a wide variety of mediums will brighten the streets and venues of the 2018 Alternating Currents festival, with the scheduled events in downtown Davenport including an arts & crafts marketplace, a chalk-art festival, art workshops, and an exhibition by area artist Glenn Boyles.

Taking place from 10 a.m. to dusk on the lawn of the Davenport RiverCenter (136 East Third Street), this summer's OMG BeckyFest will serve as a mecca of art and creativity. Boasting handmade art, vintage goods, baked delights, and pieces created and sold by burgeoning child artists, BeckyFest features more than 50 vendors showcasing and selling their wares.

Quad City Arts, meanwhile, will take over several blocks of downtown Davenport for its second-annual Chalk Art Fest, taking place from noon to 5 p.m. on August 25 and 10 a.m. to 4 p.m. on August 26. Held between the intersections of Second Avenue and Perry Street and Second Avenue and Iowa Avenue, visitors are invited to watch as artists transform pavement into magnificent works of art, with the artists competing for $1,500 in cash prizes and the people's-choice award. As part of this free, family-friendly event, Chalk Art Fest spectators can also create some chalk art of their own by taking part in the larger community piece, with food and live music also found in the outdoor locales between the Quad City Arts festival and the OMG BeckyFest.

At the Bucktown Center for the Arts (225 East Second Street), a special workshop with two of the area's most esteemed artists will begin at 1 p.m. Shelby Brown and Hannah Eddy specialize in hand-lettering and watercolor workshops, and as part of the Alternating Currents festival, they'll present a workshop on creating florals and hand-drawn letters filling in a shape of the state of Iowa or Illinois. Their workshop will be in Suite 104b on Bucktown's first floor, with the course fee $55 per person.

And at CoworkQC (102 East Second Street) from noon to 4 p.m. on August 25, Alternating Currents patrons can view a special exhibition by Family Museum instructor and coordinator Glenn Boyles. As he states in his online biography: “I have benefited from the training and encouragement of art teachers Betty Luther at Grant Elementary, Don Heggen at West High School, Bruce Walters and Jim Konrad at Marycrest University, to name a few. In the last several years, I have returned to my first love of drawing and painting, and for the last several years, I have been producing one finished work every week. My subjects, themes, and 2D mediums change with the wind, but the production has been constant. I continue to explore rather than settle in one area and I remain excited about the Journey. The works being displayed at Coworkqc are some of the drawings and paintings that I’ve made in the last several years. I hope you enjoy them.”