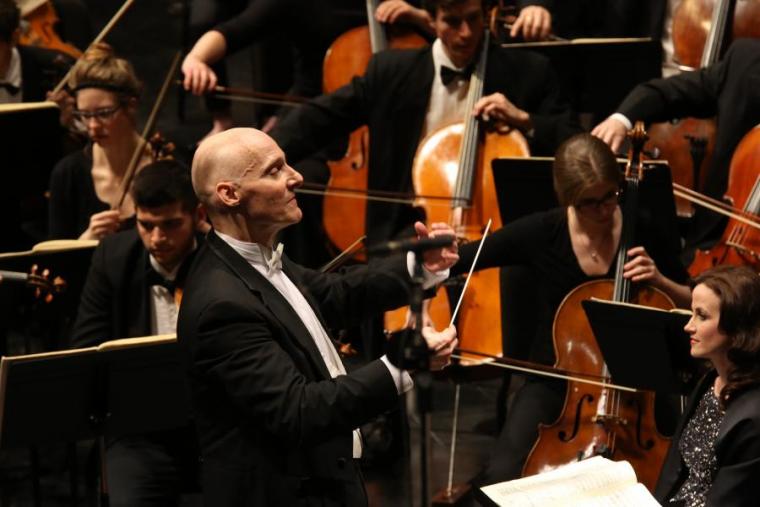 On March 18, Michelle Hargrave, the Figge Art Museum's executive director and CEO, and Mark Russell Smith, music director and conductor for the Quad City Symphony Orchestra, will team up for the virtual presentation Art Meets Music, a thoughtful and fascinating exploration of its titular themes and the roles the art forms play in tandem with one another.

Smith is a graduate in cello performance of the Juilliard School, where he studied with Claus Adam, and of the Curtis Institute of Music, where he studied conducting with Max Rudolf and Otto-Werner Mueller. While at Curtis, Smith was first-prize winner in the National Repertory Orchestra Conductors Competition, and upon graduation, was named Assistant Conductor of the Opera Company of Philadelphia and the Philadelphia Singers. From 1989 to 1994, Smith served as Associate Conductor of the Phoenix Symphony Orchestra, and from 1992 through 1999, he served as Music Director of the Cheyenne Symphony Orchestra. His dynamic personality, creative programming, and focus on outreach helped revitalize the Springfield (MA) Symphony, where he served as Music Director from 1995 through 2000.

In 2007 and 2012, Smith returned to his alma mater of the Curtis Institute of Music to lead the Curtis Symphony Orchestra in Verizon Hall, and he led Curtis on Tour in China and Korea in 2011. Other recent appearances include conducting the Colorado, Eugene, Hartford, Jacksonville, Phoenix, and Santa Barbara symphonies; the Tulsa Philharmonic; Orchestra London (Ontario); the Eastern Music Festival; and the European Center for Opera and Vocal Art in Ghent, Belgium. Smith collaborated with Yo-Yo Ma on Bridge of Souls, a concert event featuring world premieres by Asian and American composers, and as a firm believer in the use of technical innovation, he annually conducts the final round of the Minnesota International Piano Competitions streamed live online. Smith was also a music director for the Richmond, Cheyenne, and Springfield symphony orchestras, and as a champion of the music of our time, he led the St. Paul Chamber Orchestra’s Engine 408 series, working closely with living composers and adding his unique perspective to enhance that orchestra’s tradition of fostering new works.

Smith's Art Meets Music presentation with Michelle Hargrave is free, but advance registration is required, and participants will receive an e-mail with a Zoom link two hours before the program begins at 6:30 p.m. on March 18. For more information on the event, call (563)326-7804 and visit FiggeArtMuseum.org.