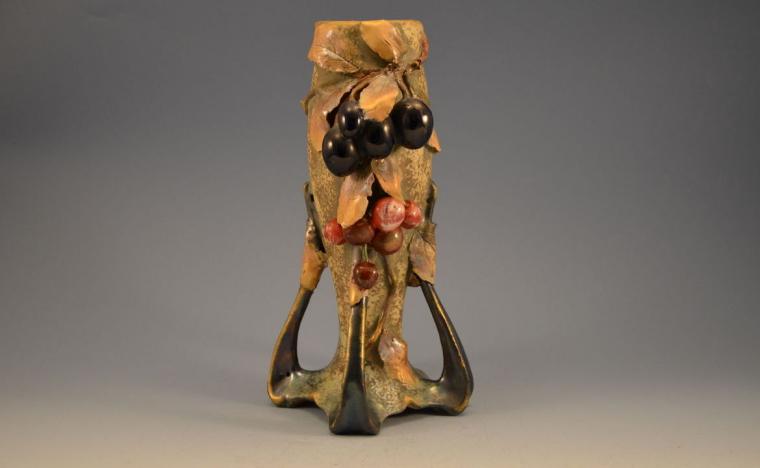 Sinuous plants, youthful maidens, venomous dragons, and other arresting sights will be on display from January 19 through June 16 at the Figge Art Museum in the Davenport venue's new exhibition Art Nouveau Amphora, a collection of magnificent works of artistic pottery from the late-19th and early-20th Centuries.

Art Nouveau, or as it was “The New Art,” was first recognized for its employment of curvilinear forms inspired by nature and its focus on aesthetic beauty. Developing out of the Aesthetic Movement, Art Nouveau gained international popularity and influenced art, architecture, illustration, and the decorative arts beginning in the last decades of the 1800s. During this period, Louis Comfort Tiffany and his studios created stained glass windows and iridescent art glass, while inTurn-Teplitz, Austria (now the Czech Republic), the manufacturer Riessner, Stellmacher, & Kessel – later called Amphora – produced distinctive artistic pottery. 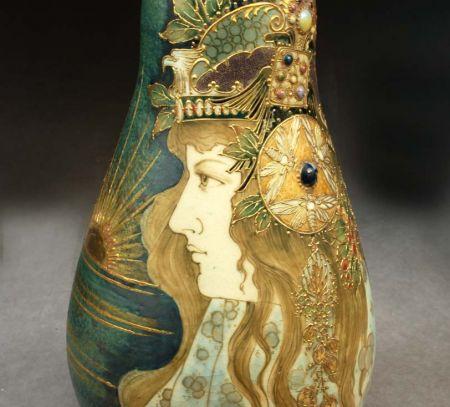 Amphora’s goal was to create luxury porcelain objects, and a collection from the company received the highest award at the 1893 Columbian Exposition in Chicago, the same year it received the Gold Medal at the San Francisco Exhibition. This led to increased sales in the United States, and by 1894, Amphora opened a second factory that produced terra-cotta items. Amphora sales grew in Europe and England as well., and in 1895, they opened a third factory that produced faience, decorated earthenware vases, jars, earthenware figurines, and vases decorated with animals. Starting in the late 1890s, the Art Nouveau style was evident in the designs of Eduard Stellmacher and Paul Dachsel, and Amphora collections received countless awards from 1893 through 1904. The Figge's Art Nouveau exhibit will grant patrons up-close exposure to many of these famed works, with its subjects ranging from elegant women to bizarre mythical beasts oftentimes finished with striking glazes and gold accents.

Art Nouveau Amphora will be on display January 19 through June 16, with regular museum hours Tuesdays through Saturdays from 10 a.m. to 5 p.m. (open until 9 p.m. on Thursdays) and Sundays noon to 5 p.m. Admission to the exhibit is free with $4-10 museum entrance, and more information on this and other Figge exhibits, programs, and events is available by calling (563)326-7804 or visiting FiggeArtMuseum.org.