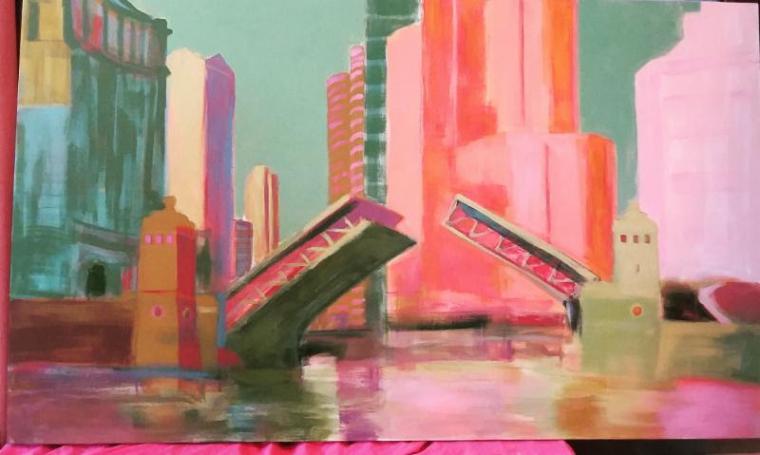 "Chromatic Chicago" at the Beréskin Gallery & Art Academy -- May 31 through June 28.

Boasting images from the Windy City both familiar and unfamiliar, and with the sites' natural hues exploding with vibrantly painted colors, Chromatic Chicago will be on display at Bettendorf's Beréskin Gallery & Art Academy, from May 31 through June 28, the new exhibition demonstrating the significant talents of Galesburg-based artist Carla Markwart.

A Chicago native, Markwart came to Galesburg in the summer of 1995 to participate in the two-month Studios Midwest Art Residency program, and she wound up moving there the following year, marrying, and raising a son. Now that her son is in college, Markwart says that she has more studio time and the freedom to develop ideas she has thought about for a long time, her subsequent works inspred both by the Windy City and her longtime interest in architecture. “Both my parents were artists,” Markwart has stated, “and my father's paintings of Chicago were always part of my life. In the last several years, I decided to try to paint my version of the city I was born in. These paintings have evolved from simplified geometry to more naturalistic imagery. Each painting suggests the next. I don't think I will ever lose my fascination for the subject or for the way it brings me closer to my late father.”

After receiving her BFA from the University of Illinois Urbana-Champaign, Markwart went on to earn her 1990 MFA from the University of California, Berkeley, and in 2016, she received the Lonnie Stewart Award of Excellence from the Galesburg Civic Art Center. As she says in her online Artist's Statement: “I find I am always trying to figure out how lines that define shapes also create a pattern that flattens out the world. Looking at maps, I see space; looking at space, I see patterns I want to map. By limiting myself to straight lines in this series (with a few curves allowed in), I am making the edges into interlocking shapes, trying to make an overall pattern using only lines. Color is the element that allows in the irrational. After working from observation in a traditional way for many years, I don't find the slowness of mimetic painting refreshing anymore. I'm still looking at the same old things but I'm trying to put more into each painting: more space, more color, more clarity. In each one, I get a little closer.”

An opening reception for Chromatic Chicago will be held at the Beréskin Gallery & Art Academy from 5:30 to 7:30 p.m. on June 7, and the exhibit itself runs May 31 through June 28, with regular gallery hours 11 a.m. to 6 p.m. Wednesdays through Saturdays. Admission is free, and more information on this and the venue's other exhibits, classes, and events is available by calling (563)508-4630 or visiting BereskinArtGallery.com.