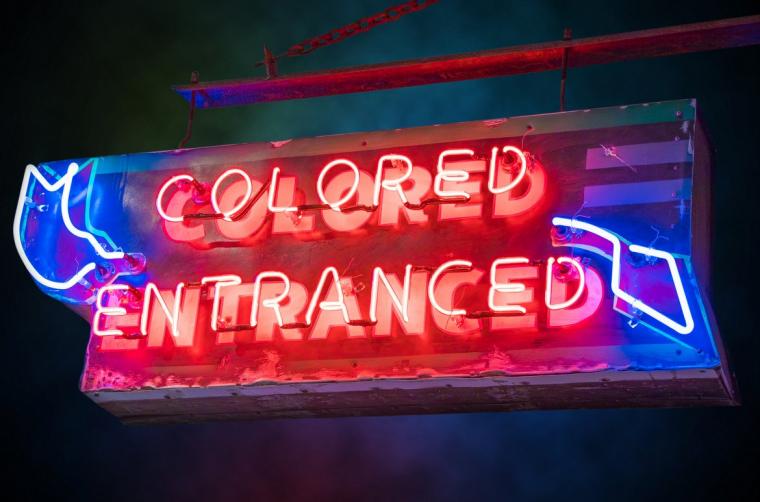 Hovering high above the heads of visitors to the Figge Art Museum, a neon sign that reads “Colored Entranced” points the way into the third-floor gallery. Anchored to the wall, the sign sits at an angle so visitors who enter from either the elevator or the stairs see it almost immediately. Bright tubes of clean red-orange light form words that contrast with and illuminate the corroded tin support from which they extend. The glow of the neon affects the surrounding space by casting light in shades of pink and violet on the white walls. A ghostly reflected image with deep red and cobalt-blue hues can be seen on the polished gray floor.

Colored Entranced is visually appealing, but the symbolic history it represents is abhorrent. Seeing it for the first time, non-black visitors may feel an unexpected pang of empathy for those who were subjected to that kind of direct segregation. I viewed the authoritative lights as a kind of primer for the historical aspect of the exhibit within. The piece conjures up an oppressive chapter in the nation’s history when widespread, overt racism was common. So unfortunately familiar are the words that I initially missed the subtle change that artist Jefferson Pinder made to them. By adding a “d” to the expected “entrance,” new meanings emerge that transcend the inherent symbolism.

The sign is one of Chicago-based Pinder’s seven pieces (four installations and three performances with accompanying installations) in Ghost Light, an exhibit on display at the Figge Art Museum through June 4. (For an interview with Pinder, click here.) The title refers to the theatrical tradition in which a “ghost light” remains lit when the stage is not in use, representing all the characters and stories that ever occupied a space. Within the confines of the museum, Pinder’s work reminds us that the past is never far away.

Colored Entranced, for example, encourages us to think about how segregation, although abolished (and technically never legal in Iowa), still exists in our community and in American society at large. The sign reminds us that this problem endures – albeit in an altered form.

With a thoughtful use of objects – such as this seemingly appropriated and manipulated sign – and his recruitment of local artists and citizens as collaborators, Pinder invites Quad Citians to examine their thoughts about race and racial divisions through personal and historical lenses. This approach – at times indirect and at others straightforward – is successful overall, due in large measure to Pinder’s varied treatment of the conceptual ideas that drive his work.

The neon sign resonates because of its play on words, referring not only to our history of legal segregation but also to America’s renewed interest in reading, writing, tweeting, and talking about the very real, very serious problems we have with racism in this country. We are captivated, emotionally stirred, entranced when a story breaks about a fatal police shooting involving a black victim. When Black Lives Matter protesters are met with counter-protesting by whites who argue that all lives matter. When riots break out in black communities after the senseless death of yet another black youth by non-black hands. When a grieving family is denied justice.

And yet all of this attention and awareness don’t seem to have spurred social change. 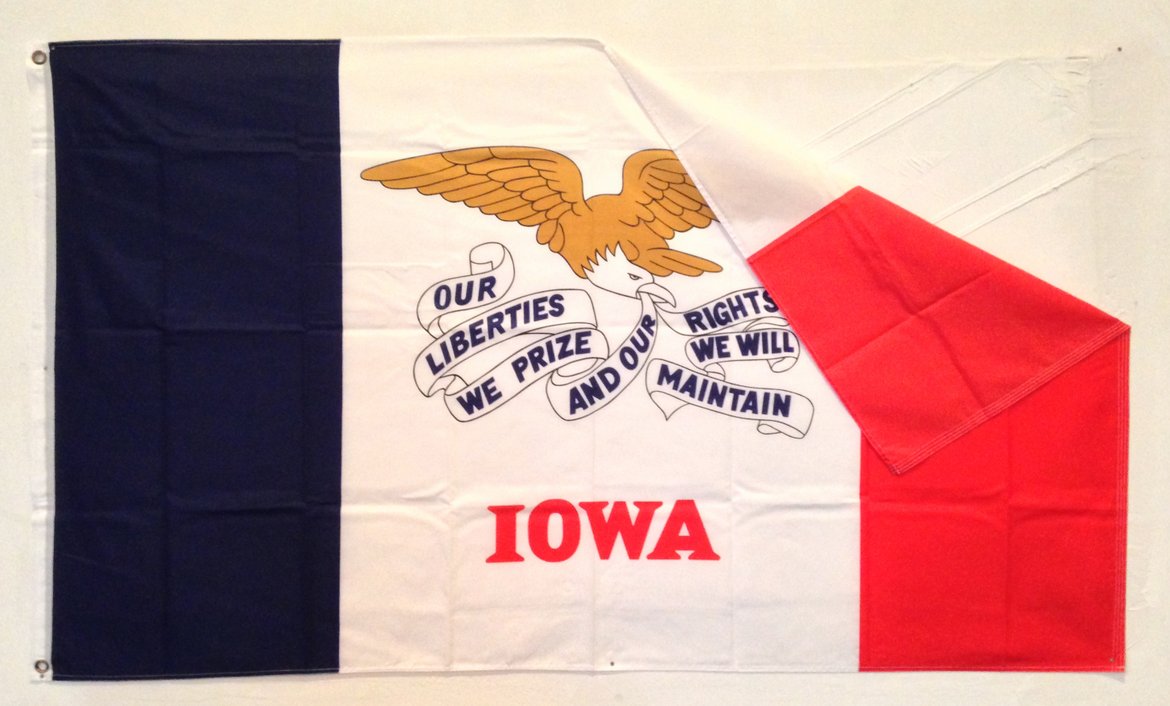 Pinder’s Invisible Flag offers an explanation with a visual approach that’s different from Colored Entranced. Pinder uses the state flag of Iowa to cover all but a corner of a Confederate flag that he painted white. The message appears to be that although intolerance and a lack of empathy can be fostered by the people we grow up around, it can also be reinforced by the institutions that govern us.

Unlike the nuanced and subtle Colored Entranced, Invisible Flag succeeds in getting straight to the point. The state flag, which ironically proclaims that “Our Liberties We Prize and Our Rights We Will Maintain,” is attempting (and failing) to hide a racist symbol – by obscuring and whitewashing it. This visual gesture, simplistic and damning, highlights the institutional racism that has been present in Iowa, and the rest of the country, throughout the course of history – no matter how much we pretend otherwise. 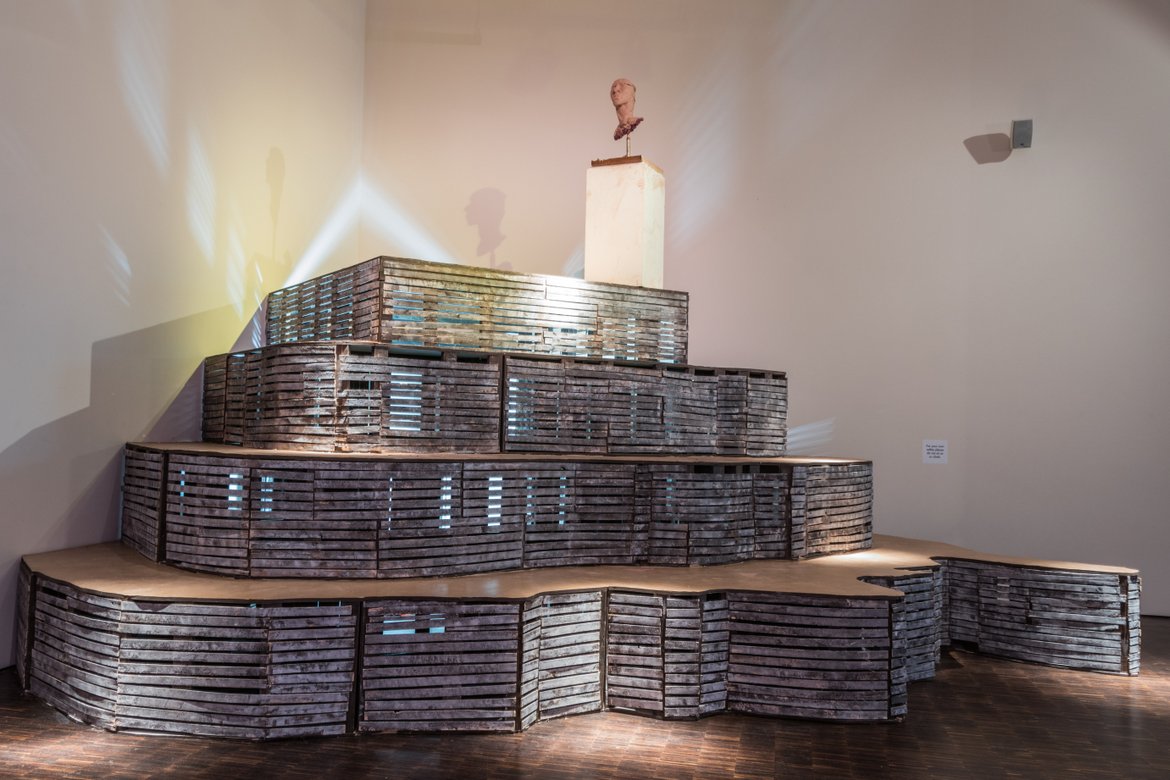 In the March 11 performance Token, a simple lesson emerged: We should make the effort to get to know one another to overcome our tendency to make judgments based on stereotypes. 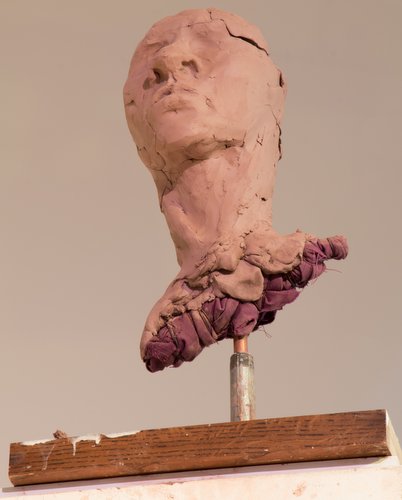 After climbing to the top of a tiered scaffold, local artist Dean Kugler – a white man with a shaved head, muscled arms, and tattoos – sculpted a human head from brown clay as he told the audience about the complicated relationship he had with his abusive stepfather.

Kugler worked the clay with forceful intensity as he described how visitors to his art shows derided him for making work that depicts black figures. To watch a white artist construct a black figure in any sort of context is uncomfortable at best and jaw-droppingly offensive at worst. How arrogant – how ignorant – do white artists have to be to think that it’s all right to assume they know anything about being black? That they can represent black bodies in any way they see fit?

As the performance progressed, however, it became clear that Kugler was neither clueless nor insensitive. To the contrary, he described the touching reconciliation he made with his stepfather – a black man who married Kugler’s mother so that a young Kugler could receive the insurance coverage necessary for surgery to treat a serious heart condition. It took years for him to make amends with his stepfather, but Kugler explained how doing so had a positive effect on his relationship with his half-black sister and her black relatives. It took less than an hour for me to see Kugler in a different, more positive, light. 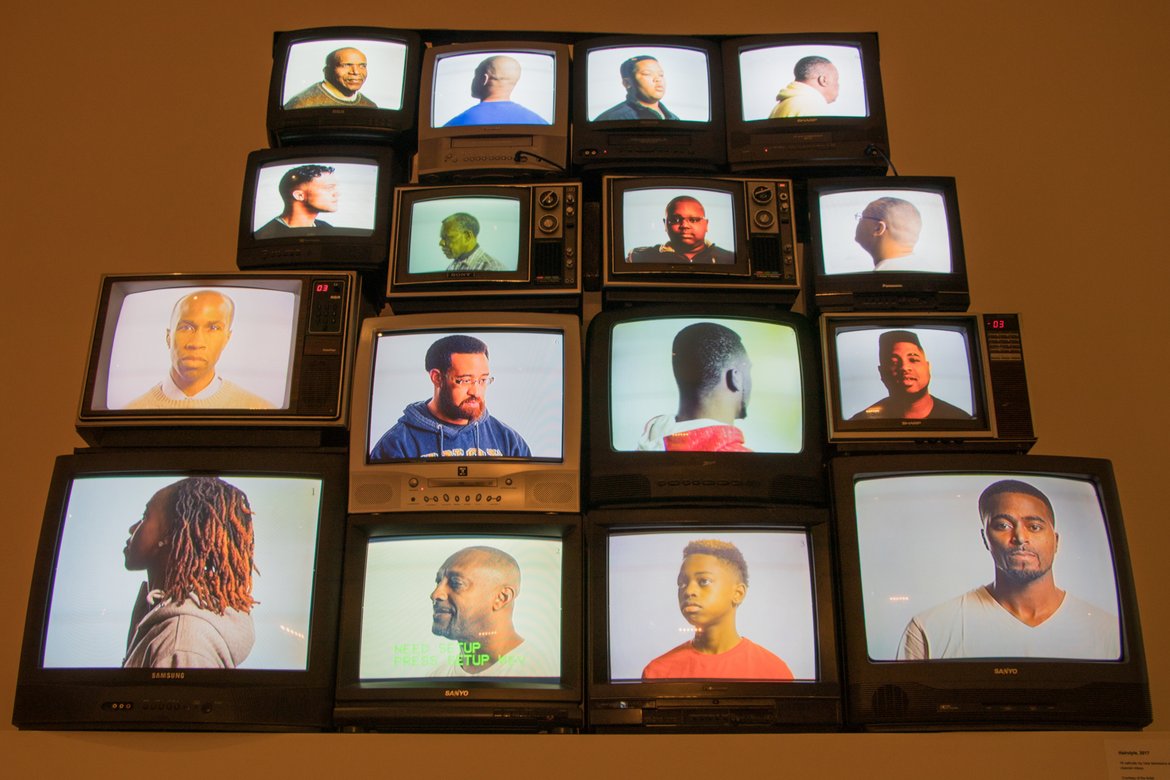 Adjacent to Token’s installation is Hairstyle, a cryptic piece made of stacked TVs that look like they were manufactured in the 1980s or ’90s. Each screen shows a loop of two to three angles (front, back, side) of a male model’s head and shoulders. The piece’s label only states that the installation is composed of 16 cathode-ray-tube televisions and 16 single-channel videos, giving the impression that 16 is somehow important.

Further observation, however, fails to answer the question of why that might be. Other than the fact that one model is white, the subjects themselves give few clues. The men, whose ages vary, seem to be in no particular order. Some have their heads tilted up, some tilted down, but at no point did it appear that the figures were somehow trying to look at their counterparts on the other screens. There was no apparent pattern in hairstyle, facial expression, or clothing.

Given the lack of clues, it seems as though we are supposed to focus on the recognition that there is a white face amid the black ones. Perhaps this is a statement about our subconscious expectations; if the models were white, would we even take note of the presence of a “token” black model? Without further assistance from the work itself or the label, it appears that Hairstyle, like Invisible Flag, is meant to direct attention to a single thought. 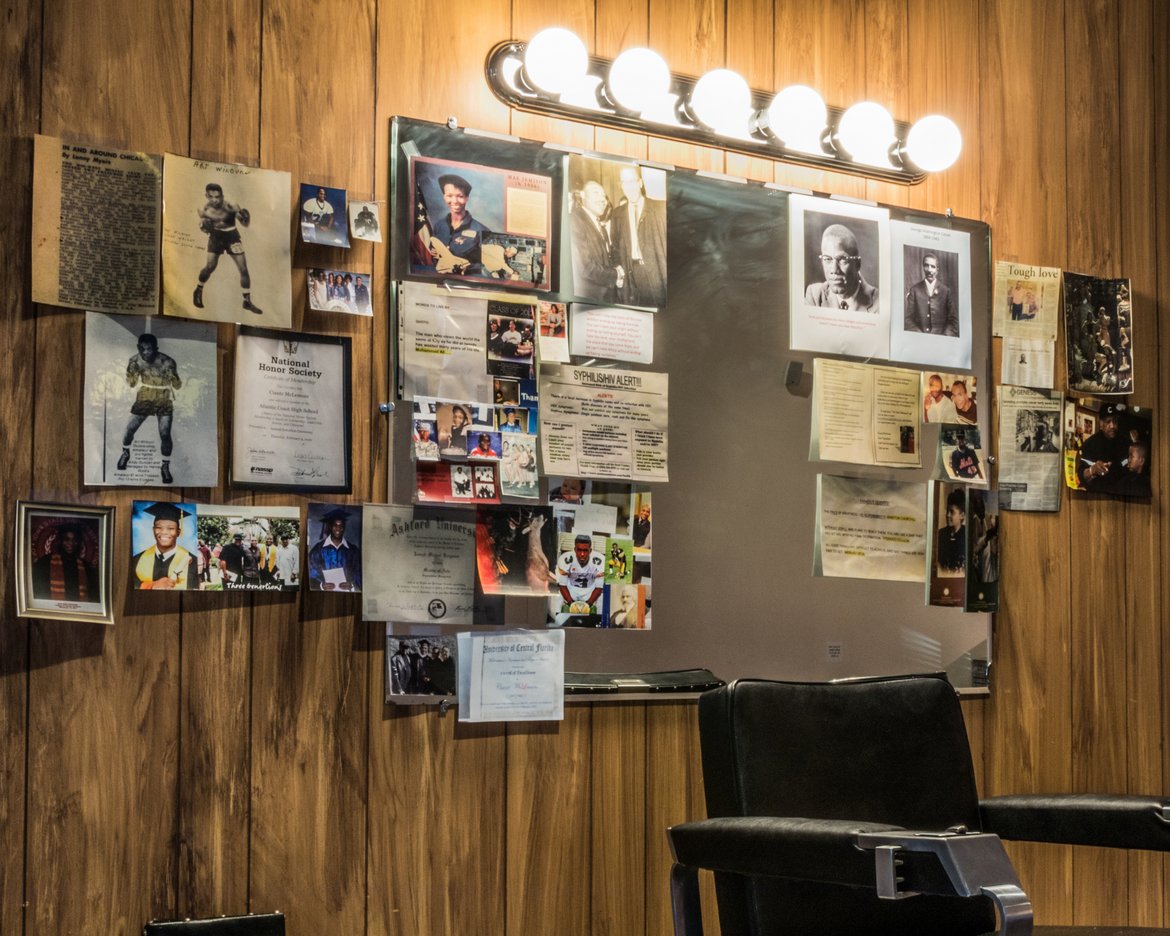 Although it also has a hair theme, the installation directly across from Hairstyle – titled Joe’s Barbershop – is far more warm and open. The significance of the barbershop as a gathering place for black men is reflected in the details of the piece. A barber’s chair rests on a platform covered in black-and-white-checked flooring. Behind the chair is a mirror that hangs on a wood-paneled floating wall. Illuminated by bare bulbs above the mirror are a casual assortment of family photographs, newspaper clippings, old images of famous black men including Malcolm X and Muhammad Ali, a document with the headline “SYPHILIS/HIV ALERT!!!”, an article about prostate-cancer screenings, inspirational quotes, and a framed certificate of membership from the National Honor Society.

The STD warning and the article about prostate cancer stand out among the items taped around the mirror. They indicate that in the barbershop, black men are encouraged to discuss issues related to their health. This stands in direct opposition to the stereotype that American men do not want to visit the doctor for any reason, and this aversion may lead them to delay or altogether avoid important routine screenings. The presence of the articles suggests that there is a concern for the physical well-being of the men who visit Joe’s. Furthermore, their location – in front of the men who are getting their hair styled – implies that a dialogue about self-care is encouraged.

Collectively, the items tell a story of achievement, pride, and responsibility and reflect an outlook that is family-oriented and enduring. If the April 1 performance by barber Joe McLemore is able to match the intimacy and approachability of the installation, viewers will be treated to an honest glimpse of what life is like for black men in a space that is truly their own.

The contrast between the cool, detached TVs of Hairstyle and McLemore’s deeply personal environment in Joe’s Barbershop helps illuminate Ghost Light overall. The strength of the exhibit thus far is how its varied elements sync to generate a meaningful dialogue about race, history, community, and empathy.