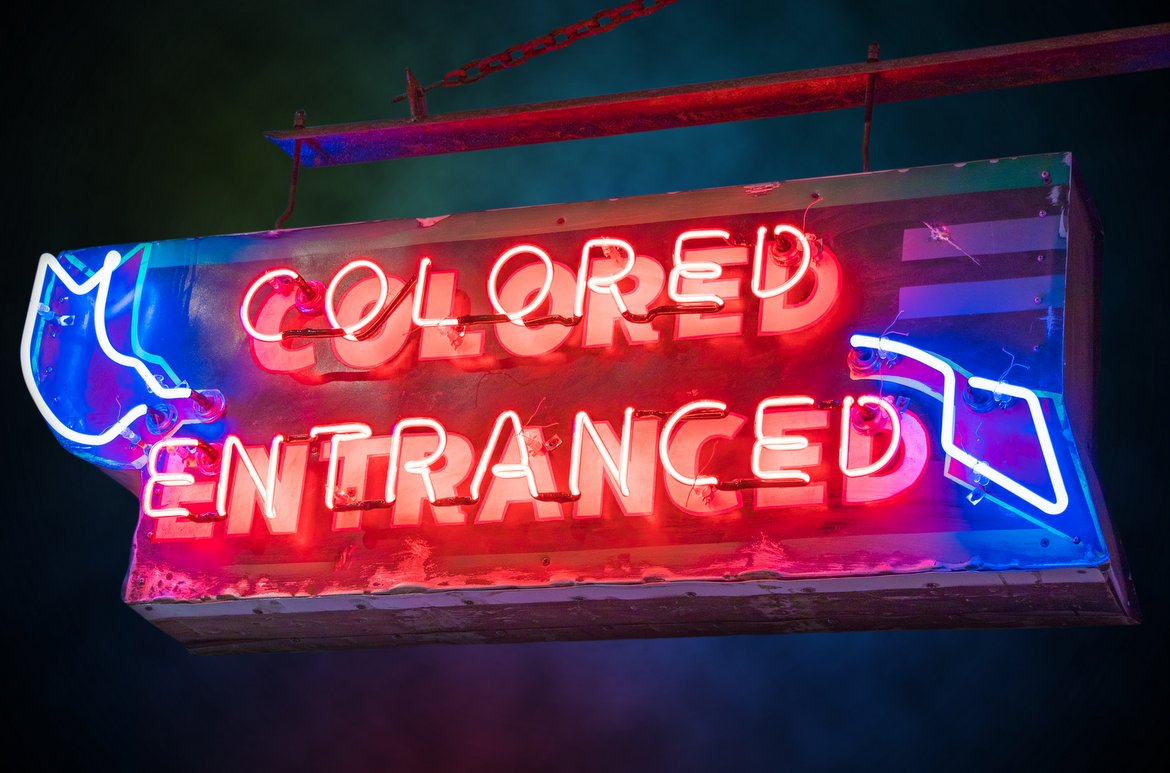 Hovering high above the heads of visitors to the Figge Art Museum, a neon sign that reads “Colored Entranced” points the way into the third-floor gallery. Anchored to the wall, the sign sits at an angle so visitors who enter from either the elevator or the stairs see it almost immediately. Bright tubes of clean red-orange light form words that contrast with and illuminate the corroded tin support from which they extend. The glow of the neon affects the surrounding space by casting light in shades of pink and violet on the white walls. A ghostly reflected image with deep red and cobalt-blue hues can be seen on the polished gray floor.

Colored Entranced is visually appealing, but the symbolic history it represents is abhorrent. Seeing it for the first time, non-black visitors may feel an unexpected pang of empathy for those who were subjected to that kind of direct segregation. 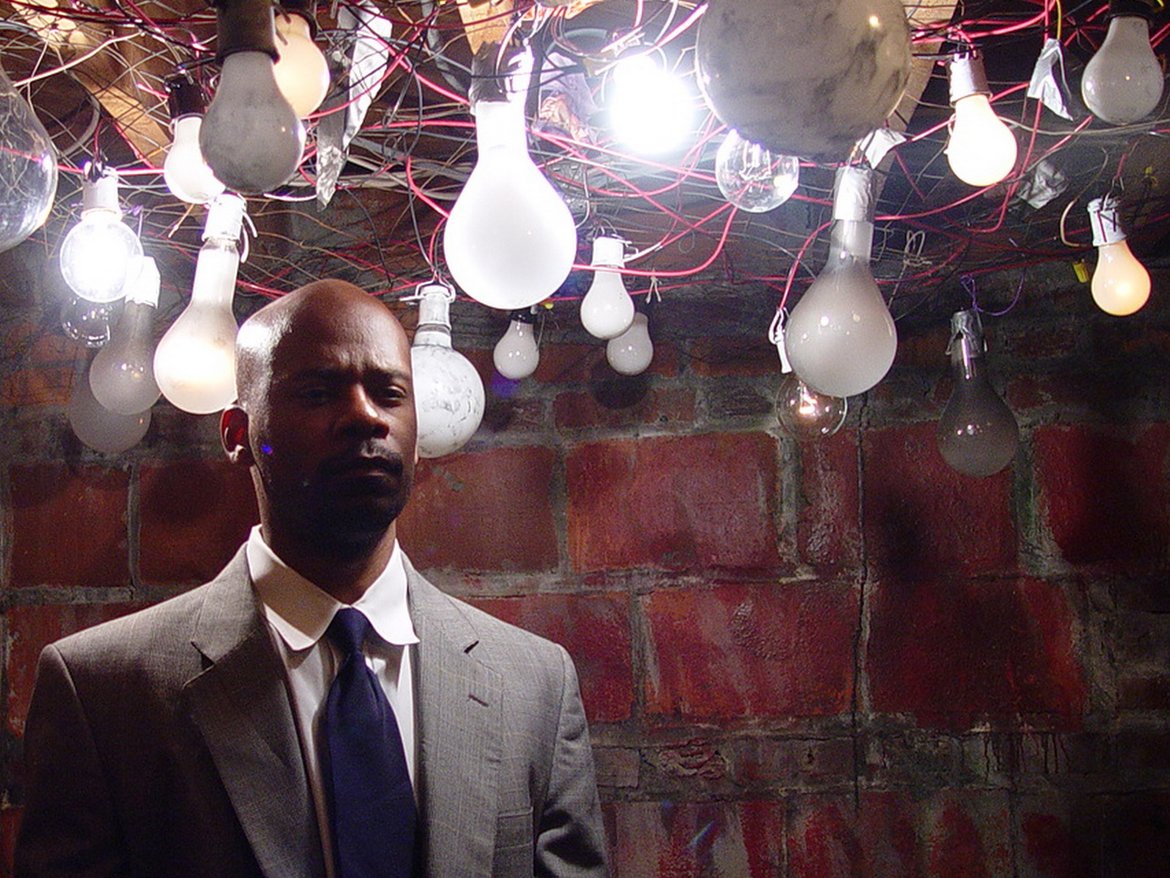 If you visit the Figge Art Museum to see Jefferson Pinder’s exhibit Ghost Light (see our review here), the artist will be satisfied if you leave enlightened. Or thoughtful. Or angry. Or confused.

He’ll also be okay if you see the neon sign reading “Colored Entranced” and choose not to enter the gallery. A Comfortable Place for Dialogues: The Figge's New Executive Director Outlines a Modest but Tangible Vision If you're looking for excitement from Tim Schiffer - the Figge Art Museum executive director who started on August 1 - don't talk to him. Instead, just look at the walls.

In our interview on January 25, the soft-spoken Schiffer articulated a modest plan for the Figge, but one that visitors will be able to see for themselves in "clusters" of exhibits that play off each other.

Schiffer's predecessor, Sean O'Harrow - who left after three years at the Figge to head the University of Iowa Museum of Art in November 2010 - believed that the Figge needed to emphasize education above all else (including being an art museum) and that the endowment needed to be built from $5 million to somewhere between $20 million and $50 million.

Because the process of developing a strategic plan for the Figge is just getting underway, the new executive director didn't offer measurable goals in those areas. But Schiffer - who had been executive director of California's Museum of Ventura County since 1999 - has already put his stamp on the museum in a different way.

Connecting the Dots: "Waxing Poetic: Exploring Expression in Art," through October 7 at the Figge Art Museum

A museum patron expects to find informative signage near an artwork., including biographical information about the artist, a description of the piece's historical context, or critical acclaim. Instead, the placard near the Marlene Miller sculpture Girl 1 - currently on display in the Figge Art Museum's Waxing Poetic show - reads: "what gestates in the roots unseen / reveals herself as tall on the inside / grown whole-sprung from a trunk / full of well manners & bluest eyes / puzzled by where she comes from."

This pairing of a visual work with a poem highlights how we assign meaning to art. In his words, Ryan Collins captures the literal appearance of the work- referencing the tree trunk, the girl's intensely blue eyes, and her polite but befuddled posture and expression.

But it also reads the sculpture. "Grown whole-sprung" and "tall on the inside" refer to the aged and androgynous face, contrasted with the child's body: The texture of the head is chunky and scratchy, as opposed to the smoothness of the body. Collins imagines the sudden appearance of this creature, enhancing our view of it without dictating a specific interpretation.

The exhibit - running through October 7 - is less about the artworks as stand-alone objects than about the process of inferring meaning. In addition to artworks matched with poetry in specific response to them, viewers are invited to create their own written reactions. At the center of the exhibit is a writing table with pens and paper, and under each work is a hanging packet of collected visitor responses. The technologically inclined are prompted to Tweet their responses to designated hashtags.

Out of Time, Out of Place: "David Plowden's Iowa," through August 26 at the Figge Art Museum Iowa is hardly renowned for dramatic landscape or architecture. One can drive for miles with no sign of life other than a road and a tilled field.

Bean Field & House, Grundy County, Iowa 2003 by photographer David Plowden dramatically depicts such a bare scene. Roughly 80 percent of the composition is sky, with sparse, fluffy clouds. At the bottom is a strip of dark land, with rows of crops running to the horizon. On the left side is a boxy house, which becomes an interesting subject when framed by the immense sky. The lines of beans bring the viewers' eyes upward, emphasizing the void. The tininess of the house in the picture makes the viewer feel diminutive.

Plowden's composition illustrates that the beauty of Midwestern scenery often lies in its grand simplicity, and how that alters the sense of scale. The stark flatness of the land, only occasionally punctuated by trees or farm buildings, shifts our field of vision; the sky begins to seems bigger, and everything on the ground becomes smaller.

David Plowden's Iowa (at the Figge Art Museum through August 26) masterfully captures the scale-warping effects of the landscape, and the photographer's 47 images of rural and small-town Iowa ably document the Midwestern agricultural aesthetic.

But he also manipulates and confuses viewers' perceptions - of size, distance, plainness, and even time - through artistic tools such as juxtaposition, viewing angle, and lack of context.