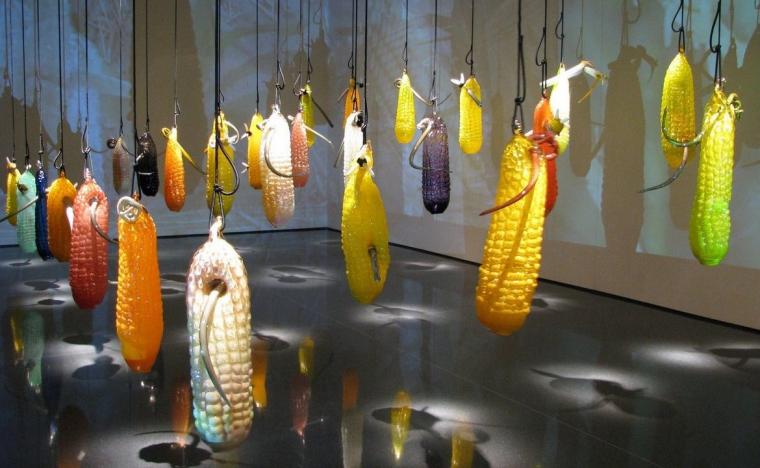 "Corn Zone" at the Figge Art Museum -- through September 4.

Purchased in honor of the Figge Art Museum's late museum trustee, board president, and museum supporter Tom Gildehaus, the visitor favorite Corn Zone will be on display at the Davenport venue through September 4, its “corn field” installation of oversize blown-glass ears carefully suspended from the museum's ceiling with rope, and designed to explore the fragility of glass, the story of corn, and contemporary issues in farming.

A bright and cheerfully colored art installation, Corn Zone tells a farming story, both fruitful and dangerous, and underscores the significance of human manipulation (including genetic modification) in modern farming. The exhibition is one of the most noted works by nationally known glass artist Michael Meilahn, who states on his Michael-Meilahn Web site: "An ear of corn is the point of convergence for my dual careers in farming and art. Corn is not a typical subject in art. But for me, the lines, rows, numbers, higher prices, lower prices, color spectrums, mapping, information technology, air masses, and species have all combined to have unwittingly become a catalyst.”
Meilahn is an influential first-generation contributor to the American Studio Glass Movement, and his Corn Zone exhibit tracks his artist trajectory from the 1970s to the present day. Serving as his retrospective, at the core of the exhibition is an immersive multi-media installation, Primordial Shift, that intertwines the artist’s investigation into crop production, genetic food modification, and the ancient history of corn.

Born into a fourth-generation Wisconsin farm family, Meilahn discovered glass blowing at the University of Wisconsin River Falls, and then traveled to Europe to learn alongside German glass legend Erwin Eisch. Afterward, the artist spent a year in the Peace Corps in Bolivia working alongside indigenous cultures learning their agricultural traditions. Later, he earned a Masters in Art at Illinois State University, and then returned to the family farm to work the land, build a studio, and create with glass. Meilahn’s work has been exhibited and collected in museums across the United States and internationally.

Corn Zone will be on display in the Gildehaus Gallery through September 4, with regular museum hours 10 a.m. to 5 p.m. on Tuesdays through Saturdays (10 a.m. to 9 p.m. on Thursdays) and noon to 5 p.m. on Sundays. Museum admission is $4-10, and more information on the exhibit is available by calling (563)326-7804 and visiting FiggeArtMuseum.org.