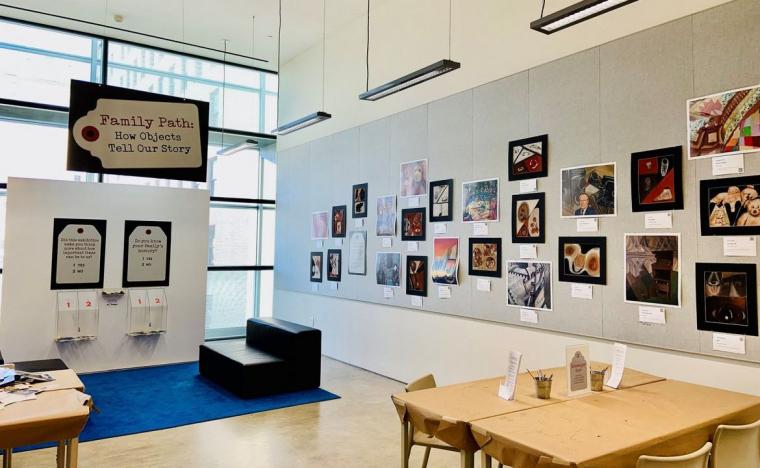 A collaboration between Davenport's Figge Art Museum and 7th-graders at the city's Creative Arts Academy of the Quad Cities, the student exhibition Family Path: How Objects Tell Our Story will enjoy a closing reception on May 19, its young artists' works inspired by the Figge's current exhibition Border Cantos / Sonic Borders, on display through June 5.

With their exhibition humanizing the Mexican-American border and inviting visitors to engage with the complex and often misunderstood experiences of those seeking a better life in the United States, Border Cantos / Sonic Borders finds American photographer Richard Misrach and Mexican-American artist and composer Guillermo Galindo addressing fraught topics touching on politics, the environment, and humanitarian issues. Misrach is well-known for his expansive images focusing on the ways humans interact with and impact the natural world, while Galindo is inspired by the Mesoamerican belief that one can bring out the spiritual essence of an object's past. Galindo's 260-minute composition Sonic Borders, which can be heard playing within the gallery, employs eight musical instruments the artist created from objects discarded near the border. Taken together, the photographs, objects, and sonic composition introduce distinct yet interrelated ways of experiencing the human consequences of immigration policies. By offering evidence of those who have journeyed through the borderlands in pursuit of their hopes and dreams, Misrach and Galindo encourage empathy for the plight of migrants everywhere.

At the Creative Arts Academy's closing reception for Family Path: How Objects Tell Our Story, attendees are invited to hear from some of the student artists and their teachers about designing the exhibition, meeting the artists they were inspired by, and the personal stories behind their artwork. The event will take place from 6 to 8 p.m. on May 19, admission is free, and more information is available by calling (563)326-7804 and visiting FiggeArtMuseum.org.