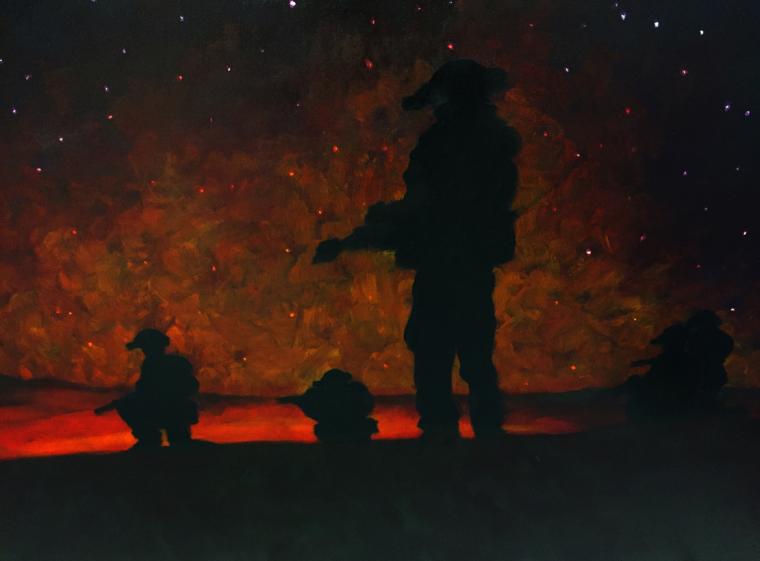 Kenneth Cunningham artwork in the "Esprit De Corps: The Brotherhood of Paratroopers, Rangers, and Special Forces at War" exhibit at the Quad City Arts Center Gallery -- February 1 through March 22.

Cunningham’s work is heavily influenced by the time he spent as an Army ranger and paratrooper, and the artist evokes a sense of mystery and danger through his compositions. His main focus, however, is the feeling of brotherhood that sustained him then and now. By adding planetary bodies to his paintings, Kenneth depicts his interest in astronomy and references the “in field” discussions of science and theology. Cunningham earned a bachelor's degree in Fine Arts (with a minor in Art History) from St. Ambrose University in 2016, and with his friend and business partner Christopher Reno, the pair developed the Quad Cities Veterans Art Initiative, a non-profit organization that provides veterans, active-duty military, and their families the opportunity to express themselves through visual art. 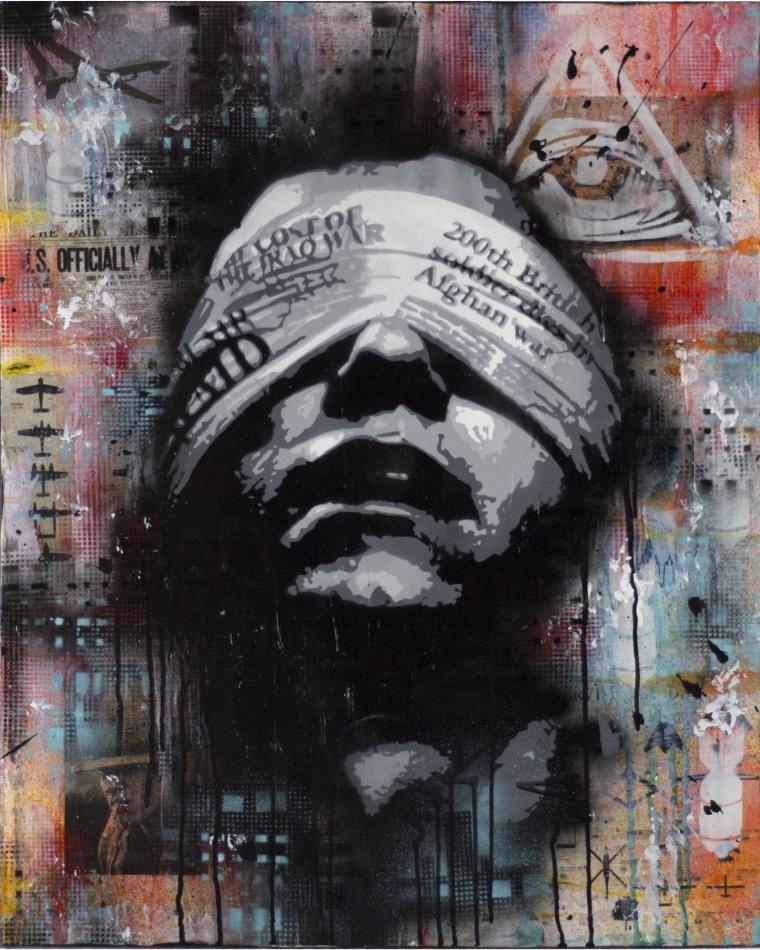 Schulz uses street-art techniques and a large array of mediums to create dynamic collages on canvas, with the artist's new exhibition Sophisticated Disobedience employing themes of truth, lies, and contradiction. Through the use of newspaper articles which can be partially read beneath the paint, he provides the basis of the propaganda that he feels should be questioned. As Schulz stated in reference to his latest series of collages, “This show is designed to make you challenge the information we are fed daily. Question everything and trust nothing.”

An opening reception for Cunningham's Esprit De Corps: The Brotherhood of Paratroopers, Rangers, & Special Forces at War and Brian Schulz's Sophisticated Disobedience, featuring meet-and-greets with the artists and complimentary food and beverages, will be held on February 8 from 7 to 9 p.m., with the Quad City Arts Center's gallery hours Tuesdays through Fridays from 10 a.m. to 5 p.m. and Saturdays from 11 a.m. to 5 p.m. Admission is free, and more information is available by calling (309)793-1213 or visiting QuadCityArts.com.