Day of the Dead Catrinas, October 20 through November 3 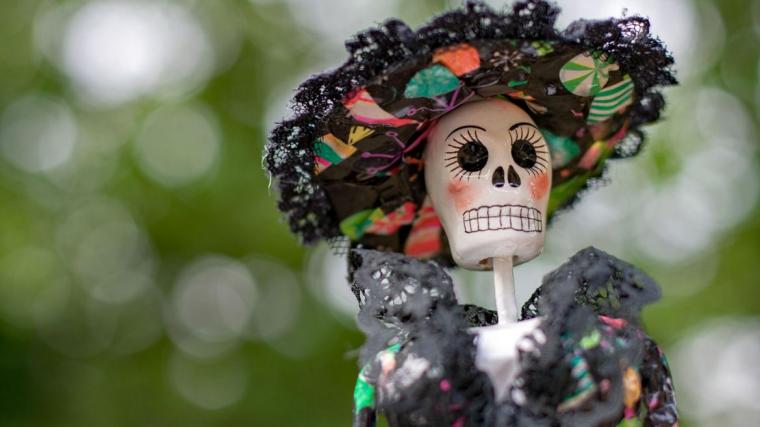 Day of the Dead Catrinas at the Figge Art Museum -- October 20 through November 3.

On display in celebration of the Mexican holiday Day of the Dead, Davenport's Figge Art Museum will showcase larger-than-life Catrinas – iconic skeletal images commemorating the event – throughout the venue from October 20 through November 3, along with a Day of the Dead altar that will be on view in the Quad City Bank & Trust Grand Lobby.

Day of the Dead is a holiday celebrated throughout Mexico – particularly in the central and southern regions – and by people of Mexican heritage elsewhere in the world. The multi-day holiday involves family and friends gathering to pray for and remember friends and family members who have died, and helping support their spiritual journeys. In Mexican culture, death is viewed as a natural part of the human cycle, and Mexicans view the day of one's passing not as a day of sadness, but as a day of celebration. In 2008, the tradition was inscribed in the Representative List of the Intangible Cultural Heritage of Humanity by the United Nations Educational, Scientific, & Cultural Organization (UNESCO), and the holiday is sometimes called Día de los Muertos in English-speaking countries – a back-translation of its original name Día de Muertos. Day of the Dead is primarily celebrated in Mexico where the day is a public holiday, and prior to Spanish colonization in the 16th Century, the celebration took place at the beginning of summer. Gradually, it was associated with October 31, November 1, and November 2 to coincide with the traditions of All Saints' Eve (Halloween), All Saints' Day, and All Souls' Day. Traditions connected with the holiday include building private altars called ofrendas, honoring the deceased using calaveras, Aztec marigolds, and favorite foods and beverages of the departed, and visiting graves with these and other possessions as gifts.

La Calavera Catrina, which translates to “Dapper Skeleton” or “Elegant Skull,” is a 1910–1913 zinc etching by the Mexican printmaker, cartoon illustrator, and lithographer José Guadalupe Posada. She is offered as a satirical portrait of those Mexican natives who, Posada felt, were aspiring to adopt European aristocratic traditions in the pre-revolution era. La Catrina has become an icon of the Day of the Dead, and the zinc etching depicts a female skeleton dressed only in a hat. Her chapeau en attente is related to European styles of the early 20th century, with the artwork's original leaflet describing a figure who was ashamed of her indigenous origins and dressed imitating the French style while wearing much makeup to make her skin look whiter. This description also employs the word garbancera, a nickname given to people of indigenous ancestry who imitated European style and denied their own cultural heritage.

The Day of the Dead Catrinas will be viewable from October 20 through November 3, with regular museum hours 10 a.m. to 5 p.m. on Tuesdays through Saturdays, 10 a.m. to 9 p.m. on Thursdays, and noon to 5 p.m. on Sundays. Museum admission is $4-10, and more information is available by calling (563)326-7804 or visiting FiggeArtMuseum.org.