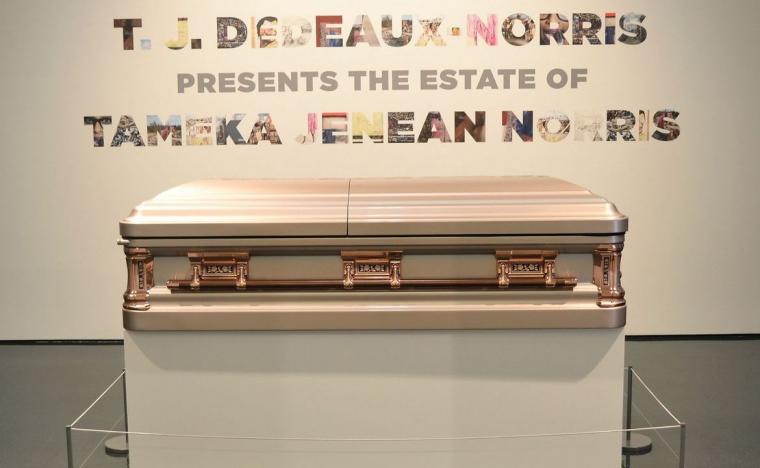 Taking place, fittingly, on the final exhibition day for the venue's T.J. Dedeaux-Norris Presents the Estate of Tameka Jenean Norris, the Figge Art Museum will present the video A Eulogy for Tameka Janean Norris on January 31 – a unique performative “funeral” for artist T.J. Norris' recently deceased artistic persona whose talents are showcased in the exhibit.

An American visual and performance artist, Dedeaux-Norris uses painting, sculpture, and performance art to create work about racial identity and the simultaneous visibility and invisibility of blackness through cultural appropriation in modern society. Their work critiques the presence of the black body in the history of painting and fine art, and they were listed as among “24 Artists to Watch in 2013” by Modern Painters magazine. In their art practice, Dedeaux-Norris adopts different personae including black academic artist “Tameka Jenean Norris,” and the distinction between artist and persona is frequently blurred in the resulting artworks that are simultaneously autobiographic and dramatized. Dedeaux-Norris is currently using the Figge exhibition to establish an artist’s estate and retrospective for Norris' artistic persona Tameka Jenean Norris, whose entire body of work – including fabric assemblage paintings, videos, music and works on paper – is currently on view.

A Eulogy for Tameka Janean Norris will be presented on the Figge's Web site and social media at 6:30 p.m. on January 31, there is no charge to view the virtual event, and more information is available by calling (563)326-7804 or visiting FiggeArtMuseum.org.