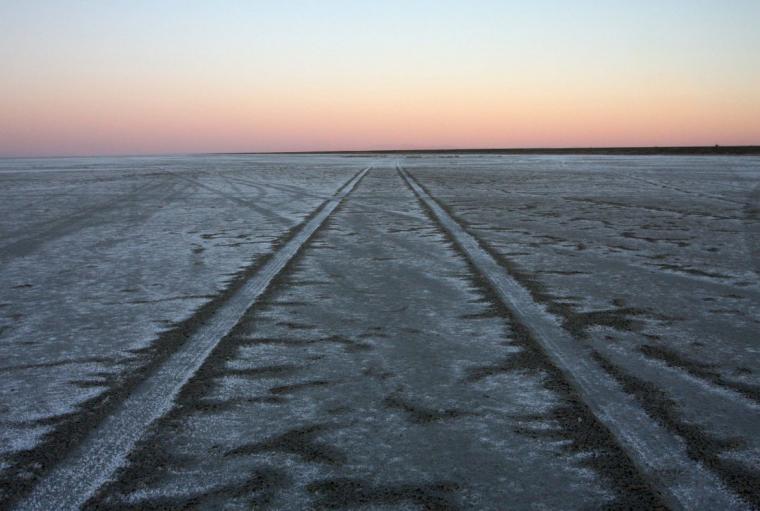 Returning this fall to the Figge Art Museum's first-floor Gildehaus Gallery, the latest offering in the Figgeo Video series will, through January 2, feature the work of acclaimed multidisciplinary artist Janet Biggs, whose video and performance works focus on extreme situations and experiences, drawing connections between physical and psychological terrains and tests of human limits.

Using the distant horizon of the Bonneville Salt Flats in Utah as a metaphor for the loss of self, Biggs' dramatic and uplifting 2009 work Vanishing Point explores the ways in which a person might lose their identity under extreme circumstances. Informed by her experiences with the effects of Alzheimer's disease, Biggs asks, "When are we no longer ourselves?" Here she pairs scenes of renowned motorcyclist and land-speed record-holder Leslie Porterfield with members of James Allen’s Addicts Rehabilitation Center Gospel Choir performing a song written specifically for the video. Vanishing Point examines the struggle to maintain one's identity, the role of those who bear witness to that struggle, and the search for personal agency that may end in either destruction or transcendence.

Overcoming a life-threatening 2007 crash on the Bonneville Salt Flats at over 100 mph, cyclist Porterfield returned in 2008 to break three world motorcycle records with a top speed of 234 mph. Filmed during these record breaking runs, Biggs' accomplishment captures Porterfield's intense focus on the pursuit of her pre-accident self. In 1975, former drug addict and founder of Harlem's Addicts Rehabilitation Center James Allen, who had nearly lost himself to addiction 20 years earlier, established an a capella choral group. Since its inception, the group has dedicated itself to fight against addiction to promote hope, healing, and sense of purpose to the participants through their performances. Biggs collaborated with Grammy nominated composer Barney McAll on the song that the ARC choir performs in the video, and with its lyrics by Biggs and music by McAll, the composition explores feelings of isolation and self-loss which lead some on a search to regain not only their identity, but to transcend all limits.

A 2018 John Simon Guggenheim Foundation fellow, Biggs is known primarily for her work in video, photography, and performance, and her work focuses on individuals in extreme landscapes or situations and often navigates territory between art and science. She has captured such events as kayaks performing a synchronized ballet in Arctic waters and sulfur miners inside an active volcano, and the artist's recent projects have explored the creation and loss of memory from personal, physical, and scientific perspectives. Biggs’ work has taken her into areas of conflict in the Horn of Africa and to Mars (as a member of crew 181 at the Mars Desert Research Station), and she has also collaborated with neuroscientists, Arctic explorers, aerospace engineers, astrophysicists, Yemeni refugees, and even a robot.

Figgeo Video: Janet Biggs will be viewable at the Davenport venue through January 2, with regular museum hours 10 a.m. to 5 p.m. on Tuesdays through Saturdays, 10 a.m. to 9 p.m. on Thursdays, and noon to 5 p.m. on Sundays. Museum admission is $4-10, and more information is available by calling (563)326-7804 and visiting FiggeArtMuseum.org.