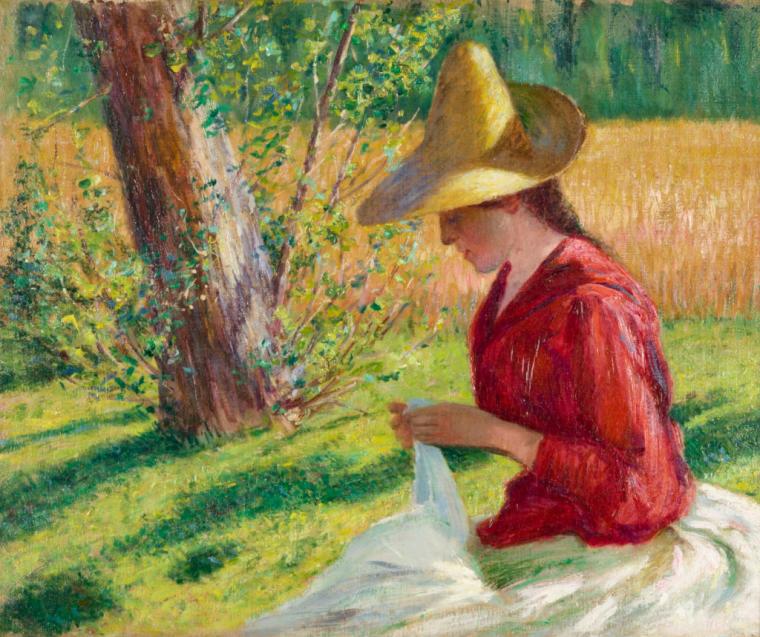 Dozens of paintings by the gifted artist credited for introducing Impressionism to the United States – many never before seen – will be on display at the Figge Art Museum through August 28, with the Davenport venue exploring the work, life, and career of a celebrated 19th-century American in the exhibition John Leslie Breck: American Impressionist.

Breck was born at sea off Hong Kong in 1860, and after training in the United States, Germany, and France, he visited the French town of Giverny for the first time in 1887 with a small group of colleagues. He soon befriended Claude Monet and his family, helped lay the groundwork for Giverny to become an artist’s colony, and began his conversion to Impressionism. During a quick trip back to the United States between 1890 and '91, Breck was among the first to exhibit his new Impressionist paintings, and to use the style to depict the American landscape. He soon became known as one of the leaders of the movement in this country – a reputation that was enhanced by the work he did on a second trip to Giverny in 1891; a series of increasingly well-received exhibitions in Boston in the mid-1890s; and his final series of paintings of Venice after a trip there in 1897.

Reviewing Breck’s first solo exhibition at the St. Botolph Club in 1891, the critic for the Boston Transcript called it “the art sensation of the season,” going on to say that “almost everybody in town has visited the exhibition and almost everybody is discussing it.” Two years later, another critic reflected on the impact of this 1891 exhibition and wrote that “a fierce controversy at once arose between the champions of the old ... and the new ... landscape schools. ... Mr. Breck was at once recognized, by friend and foe, to be the American head [of the latter].” Upon Breck’s suicide in 1899, his colleague John Henry Twachtman, himself one of Impressionism’s American leaders, called Breck “a great genius” and the artist who had “started a new school of painting in America.”

Yet despite the high regard in which Breck was ultimately held in Boston art circles and by his contemporaries at the end of his life, he has largely flown under the art-historical radar since his passing more than a century ago. Consequently, John Leslie Breck: American Impressionist is the first large-scale, museum-organized retrospective of Breck’s work since his memorial exhibition in 1899. It features more than 70 of his finest paintings, many of which have not been on public view since his death, as well as several related works by his colleagues. Figge staffers are delighted to offer patrons an opportunity to see, for the first time, so many of Breck’s groundbreaking paintings gathered in one place, inviting guests to dive into the lush world of his landscapes, to reflect upon their own relationships with the natural world, and to consider anew Breck’s rich legacy.

Organized by the Mint Museum, John Leslie Breck: American Impressionist is being generously presented by Bank of America, with additional support provided by The Mr. and Mrs. Raymond J. Horowitz Foundation for the Arts and The Mint Museum Auxiliary. The exhibition will be on display in the Third Floor Gallery May 28 through August 28, with regular museum hours 10 a.m. to 5 p.m. on Tuesdays through Saturdays (10 a.m. to 9 p.m. on Thursdays) and noon to 5 p.m. on Sundays. Museum admission is $4-10, and more information on the exhibit is available by calling (563)326-7804 and visiting FiggeArtMuseum.org.