“Lesley Dill – Wilderness: Light Sizzles Around Me,” through August 22 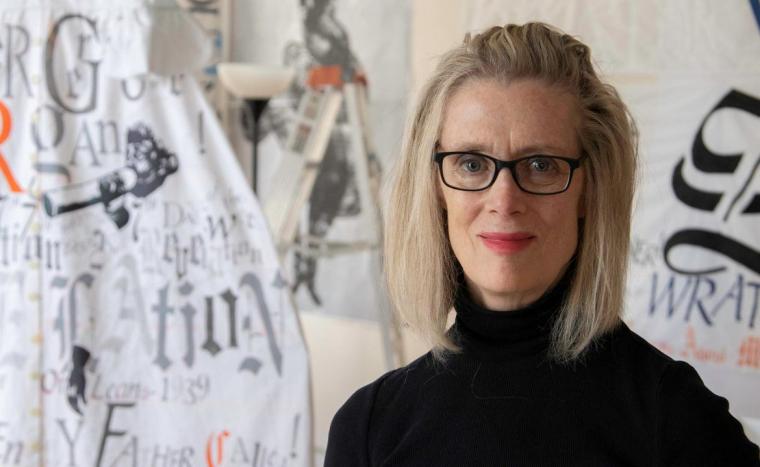 “Lesley Dill – Wilderness: Light Sizzles Around Me" at the Figge Art Museum -- May 29 through August 22.

Works by one of the most gifted and prolific artists of the 21st century will be on display in the newest exhibition at the Figge Art Museum, with the Davenport venue, through August 22, housing Lesley Dill – Wilderness: Light Sizzles Around Me, a showcase for the talent whose wide variety of media including sculpture, print, performance art, and music explores the power of language and the mystical nature of the psyche.

Dill received a Bachelor of Arts in English in 1972 from Trinity College and went on to receive a Master of Arts in Teaching from Smith College in 1974. After a period of teaching in public and private schools, Dill received a Master of Fine Arts from the Maryland Institute College of Art in 1980, although it wasn't until her late twenties that Dill began to consider a career as an artist. Before pursuing a career in art, Dill's exposure to art was mostly limited to the crafts practiced by various family members, including ceramics, linocut printing, rug making, and weaving, and as a result, some craft practices can be found in her art.

Over the course of her career, Dill has been the recipient of awards and grants from such institutions as the Joan Mitchell Foundation, New York Foundation for the Arts, National Endowment for the Arts, and the Rockefeller Foundation. She was also the recipient of the Anonymous Was a Woman Award in 2008, a Center for Book Arts Honoree in 2010, a SGC International Lifetime Achievement in Printmaking Award in 2013, and the Falk Visiting Artist Residency at the University of North Carolina at Greensboro in 2014–15. Dill was named a Fellow of the John Simon Guggenheim Memorial Foundation in 2017, and two years later, she received both the Smith College Museum of Art Centennial award and the Emily Dickinson Museum's Tell It Slant Award.

Wilderness, Light Sizzles Around Me features a uniquely inspired group of sculptures and two-dimensional works more than a decade in the making, with the installation including many works made expressly for the Figge’s presentation. The exhibition represents Dill’s ongoing investigation into the significant voices and personas of America’s past. For Dill, the “American” voice grew from early America’s obsessions with divinity and deviltry, on fears of the wilderness “out there” and wilderness inside us. The extremes of both shaped history and gave pulse and heat to the words of activists such as John Brown, Sojourner Truth, Mother Ann Lee, and Dred Scott. Dill has written: “These personas and their times stir something deep in my own family history and sense of self. I am compelled to explore this period in America’s history when limited access to a diversity of written word ignited the bravery of these figures in response to their times.”

The catalog Lesley Dill: Wilderness, Light Sizzles Around Me, featuring essays by art historian and critic Nancy Princenthal and others, will be produced in conjunction with the exhibition and will be released by Scheidegger & Spiess, Zurich in June. The installation, meanwhile, will be accompanied by a film of Dill’s 2018 opera Divide Light, with its libretto based on the writings of Emily Dickinson and designs by Dill.

Lesley Dill – Wilderness: Light Sizzles Around Me will be on display through August 22, and regular museum hours are 10 a.m. to 5 p.m. on Tuesdays through Saturdays (10 a.m. to 9 p.m. on Thursdays) and noon to 5 p.m. on Sundays. Museum admission is $4-10, with more information available by calling (563)326-7804 and visiting FiggeArtMuseum.org.