“Louis Comfort Tiffany: Treasures from the Driehaus Collection,” February 16 through May 19 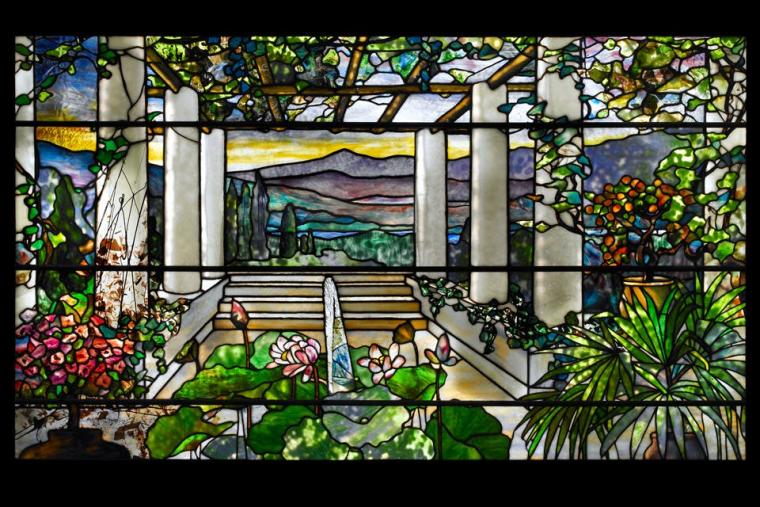 “Louis Comfort Tiffany: Treasures from the Driehaus Collection" at the Figge Art Museum -- February 16 through May 19.

Saturday, February 16, through Sunday, May 19

One of the most renowned artisans in American history, and the beautiful works that bear his name, will be celebrated in a February 16 through May 19 traveling exhibition at the Figge Art Museum, with the Davenport venue showcasing sublime colors and the glorious fragility of glass in Louis Comfort Tiffany: Treasures from the Driehaus Collection.

Louis Comfort Tiffany was born in New York City on February 18, 1848, and began his career as a painter, studying at the National Academy of Design in New York City. He expanded his repertoire through his work as an interior designer, and began working at a glassworks in Brooklyn, where he developed some of his signature methods of making glass and experimented with new glass forms and techniques. In 1894, he patented the poetic term “Favrile,” from the Latin word fabrilis (meaning handmade), to describe the iridescent blown art glass he began producing. In late 1897, Tiffany built his own glass furnace in Corona, Queens, New York, which produced Favrile and other unique varieties of glass for use in ecclesiastical and secular stained glass windows, lamps, vases, mosaics, and accessories.

While the magnificence and exceptional quality of Tiffany glass made this medium the most significant of his career, he continued to innovate, expanding his operations into enamels, pottery, and jewelry. Despite the enormous success he experienced in his many interrelated businesses over his long career, Tiffany’s work went out of vogue with the advent of modernism. Tiffany’s work received renewed appreciation in the mid-twentieth century, and continues to be associated with unparalleled quality and beauty to this day. When Tiffany died in 1933, the New York Times obituary counted him “among the best known of American artists.”

Drawn from the collection of the Richard H. Driehaus Museum in Chicago and boasting jewel-like colors and iridescent surfaces , Louis Comfort Tiffany: Treasures from the Driehaus Collection features 62 exemplary works created by Tiffany's studios. From small blown glass vases to breathtaking stained-glass windows and a spectacular selection of lamps, the exhibition demonstrates the craftsmanship and inventiveness of Tiffany artisans.

A Conservator Talk on Louis Comfort Tiffany: Treasures from the Driehaus Collection will be held at 6:30 p.m. on February 21, with area artists and conservators from Glass Heritage discussing the practices of glass-art creation and preservation. The exhibition itself will be on display February 16 through May 19, and regular museum hours are Tuesdays through Saturdays from 10 a.m. to 5 p.m. (open until 9 p.m. on Thursdays) and Sundays noon to 5 p.m. Admission to the exhibit is free with $4-10 museum entrance, and more information is available by calling (563)326-7804 or visiting FiggeArtMuseum.org.