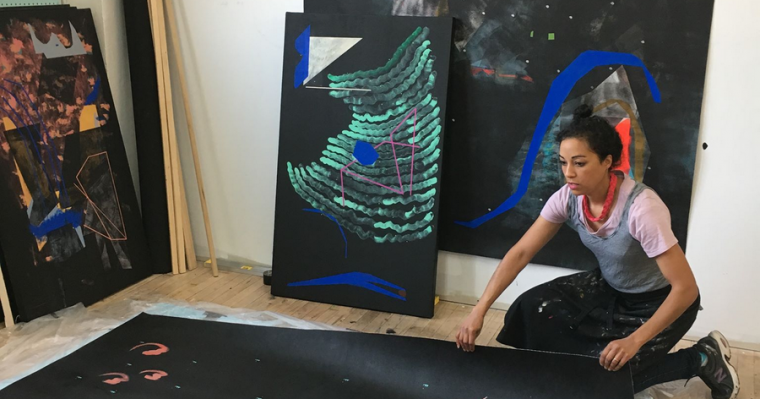 On October 6, both Figge Art Museum members and the general public are invited to celebrate the work of a gifted, Chicago-based artist during a Member Reception and Artist Talk with Caroline Kent, whose new installation An Improvisation of Form transforms the Davenport venue's Katz Gallery into an immersive exhibition of paintings, site specific interventions, and sculptures, surrounding visitors in a unique synthesis of language and abstract forms.

With the installation an overview of her works created in the last decade, An Improvisation of Form artist Kent states, “I grew up in the Midwest in Sterling, Illinois and want to present what an expanded painting practice looks like. I want to demonstrate how language, translation and abstraction can all come together through painting in cohesive, legible or illegible ways. I want for the audience to be able to make connections between geography, creativity, imagination, and place.”

At the center of Kent’s practice is an invented vocabulary composed of geometric forms, hand-drawn marks, and color often set against a black ground. The shapes in her works act as illegible symbols in a diagram for an unknown place or mechanism, or a pictogram for which there is no cipher. The linework in her painting also seemingly strives to communicate through indecipherable calligraphic marks. Kent’s formation of a symbolic language poses questions to viewers about the purpose of a system of language which moves beyond normative structures of communication. Should all language be able to be understood? Are there benefits to a system of communication which defies translation? What is the relationship between abstraction and language?

“Language is a capacious subject to work through in a painting practice," says Kent, who received a 1998 Concentration in Art degree at Illinois State University and a 2008 MFA Department of Art, from the University of Minnesota. “It can act in a myriad of ways from elusive and hidden one moment to expressive and illuminating in another. This potential to act in unexpected ways is what keeps me engaged and curious.”

After her 1998 graduation, Kent joined the Peace Corps, where she lived and worked in Transylvania, Romania, for two years. It was here that Kent found herself inspired by the multitude of pastel colors that would later play an important part in some of her most well known works. After the Peace Corps, Kent resided in Minneapolis for 15 years, and she has also worked as an assistant professor of art, theory, and practice at Northwestern University. In 2017, Kent moved to Chicago, where she currently lives and works as an artist and mother of three, and she is currently represented by Casey Kaplan in New York City and PATRON in Chicago.

Figge members are invited to enjoy a reception of light appetizers and a cash bar on October 6 at 5 p.m., while Caroline Kent discusses her work and exhibit with the general public that evening at 6:30 p.m. An Improvisation of Forman itself will be on display from October 1 through February 4, and more information on both the installation and its adjoining October 6 events is available by calling (563)326-7804 and visiting FiggeArtMuseum.org.