“The Night Bookmobile,” February 28 through April 12 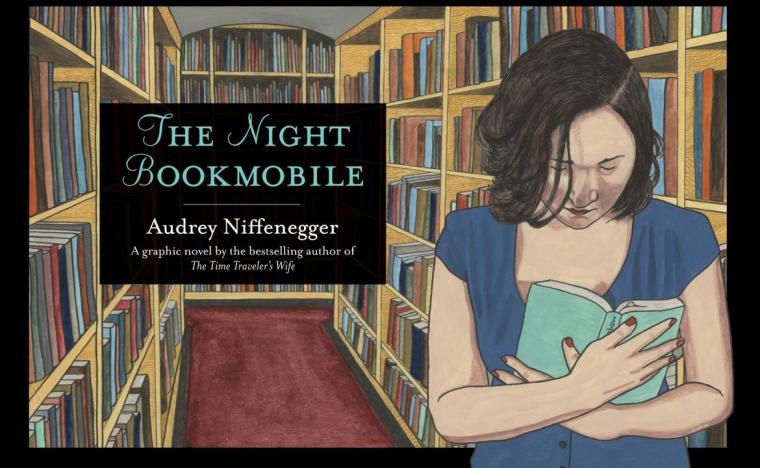 With Publishers Weekly raving that The Night Bookmobile is a “romantic, melancholy tale” that's “a paean to reading and to the life one person lives through books,” Audrey Niffenegger's 2010 graphic novel travels from the page to the walls of St. Ambrose University's Catich Gallery in a February 28 through April 12 exhibition, one that showcases original art in which “the simplicity of the images contrasts with sophisticated page layouts in which [Niffenegger] plays with panels and perspective.”

The New York Times bestselling author of 2003's The Time Traveler's Wife and 2009's Her Fearful Symmetry, Niffenegger crafted her first graphic novel after the success of her two critically acclaimed “novels-in-pictures.” First serialized as a weekly column in the UK's newspaper The Guardian, The Night Bookmobile tells the story of a wistful woman who, one night, encounters a mysterious disappearing library on wheels that contains every book she has ever read. Seeing her history and most intimate self in this library, she embarks on a search for the bookmobile. But her search turns into an obsession, as she longs to be reunited with her own collection and memories. The Night Bookmobile is a haunting tale of both transcendence and the passion for books featuring evocative, full-color, pen-and-ink works, many of which will be showcased in the Catich Gallery's exhibition.

Niffenegger trained as a visual artist at the School of the Art Institute of Chicago, and received her MFA from Northwestern University's Department of Art Theory and Practice. She has exhibited her artist's books, prints, paintings, drawings and comics at Printworks Gallery in Chicago since 1987. Prior to the release of The Night Bookmobile, Niffenegger published the graphic novel – or “novel in pictures,” as the author calls it – The Three Incestuous Sisters in 2005, following it with another graphic novel The Adventuress in 2006. Meanwhile, a hit film version of her bestselling debut novel The Time Traveler's Wife was released in 2009, and Niffenegger was commissioned to adapt her 2013 novel Raven Girl into a ballet that premiered at London's Royal Opera House.

A Q&A and book-signing with Niffenegger will be held in St. Ambrose University's Catich Gallery at 4 p.m. on March 1, with the opening reception for The Night Bookmobile beginning immediately afterward at 5 p.m. Regular hours for the exhibition's February 28 through April 12 display are 9 a.m. to 5 p.m. Mondays through Fridays and 10 a.m. to 4 p.m. on Saturdays, and more information is available by calling (563)333-6444 or visiting SAU.edu/catich.