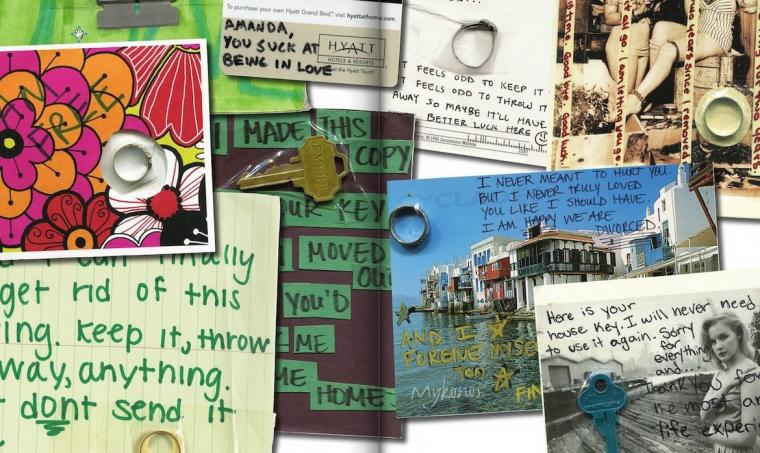 “Post Secret" at the Quad City Arts Center -- through December 3

Frank Warren started PostSecret in 2005 as a community art project in which he invited total strangers to anonymously mail in their secrets on homemade postcards, and some of those contributions are currently on view in the frank, fascinating, funny, and moving exhibit Post Secret, on display at Rock Island's Quad City Arts Center through December 3.

The concept for Warren's PostSecret project was that completely anonymous people decorate a postcard and portray a secret that they had never previously revealed. No restrictions are made on the content of the secret; only that it must be completely truthful and must never have been spoken before. Entries range from admissions of sexual misconduct and criminal activity to confessions of secret desires, embarrassing habits, hopes and dreams. PostSecret collected and displayed more than 2,500 original pieces of art from people across the United States and around the world between its founding on January 1, 2005 and 2007. PostSecret.com, which started as an experiment on Blogger, was updated every Sunday with 10 new secrets, all of which shared a relatively constant style, giving the artists who participate some guidelines on how their secrets should be represented. Since its inception, more than 80,000 users have registered for the online discussion forum, and according to Youth Trends' "Top Ten List Report" in February of 2008, PostSecret was the 10th most popular site among female students in the U.S., with 7 percent of those polled naming the site as their favorite.

In April 2008, Warren teamed up with 1-800-SUICIDE to answer some of the authors' anonymous cries for help through peer-run crisis hotlines on college campuses. Warren himself hosts events at numerous colleges to speak about the many different secrets of today's society, and his Post Secret exhibition presently at the Quad City Arts Center also travels the country, showcasing many of the hundreds of thousands of secrets he has received. In his book My Secret: A PostSecret Book, Warren discusses his experiences and encounters with people all around the world who were inspired by the postcards, and how it got many people addressing things that they would otherwise never discuss.

Post Secret will be on display through December 3, with regular gallery hours Mondays through Fridays 10 a.m. to 5 p.m. and Saturdays 11 a.m. to 5 p.m. Admission is free, and more information is available by calling (309)793-1213 and visiting QuadCityArts.com.