Artists from the Quad City region are, through September 2, transforming the Quad City Arts International Airport Gallery with works incorporating neon and video, along with other lighting effects, in the exhibition Electrified – a fascinating showcase boasting vintage automobile signs on loan from K.V. Dahl of Dahl Ford, as well as an interactive exhibit requiring viewers to climb onto a vintage bicycle and pedal in order to illuminate a display courtesy of Bill Wohlford and Ron Kessel.

Among the featured artists in Quad City Arts' Electrified exhibition are Quad Cities talents Gail Ray, Bruce Walters, and Dawn Wohlford. In last year's College Invitational art exhibit at the Figge Art Museum, Ray was awarded the first-place prize for her entry Entertaining Angels Unaware, a series of three wood, oil, and found object sculptures, and the artist has a studio at the QC Co-Lab in downtown Davenport.

Walters has taught at Western Illinois University since 1997, previously serving as the Chairperson of the Communications, Fine and Performing Arts Division at Teikyo Marycrest University, where he assisted in the development of the first undergraduate degree in Computer Graphics. Walters has also worked as a graphic designer and illustrator for corporations, museums, federal and state institutions, advertising agencies, and the media, and frequently contributes to the River Cities' Reader with his “Art in Plain Sight” columns on notable public works in the area. 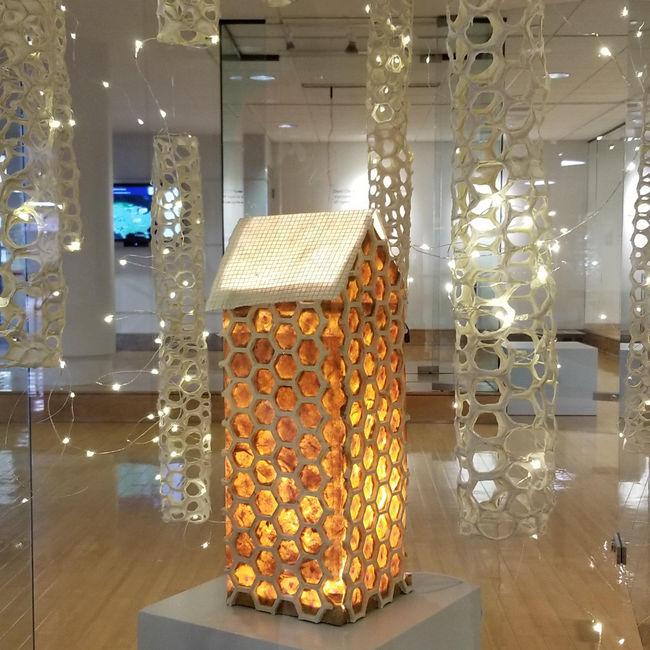 Wohlford, who serves as Quad City Arts' Visual Arts Director, says in her Artist Statement: “I could be the Poster Child for the slogan 'Reuse, Reduce, Recycle.' Handmade paper is the basis for the majority of my artwork, but I often incorporate, weave or build using other found materials. I use old clothes, dead plants, shredded money, and items such as used up doormats (made of natural fibers) to make paper pulp. I cast or incorporate pieces of rusty metal, vintage glass, bicycle inner tubes, leather and anything else that catches my eye. Pieces are often finished with pigment to achieve the appearance of metal.”

The Quad City International Airport Gallery is located opposite the airport's gift shop and restaurant, there is a $1 fee for parking, and more information on the Electrified exhibit running through September 2 is available by calling (309)793-1213 extension 108 or visiting QuadCityArts.com.