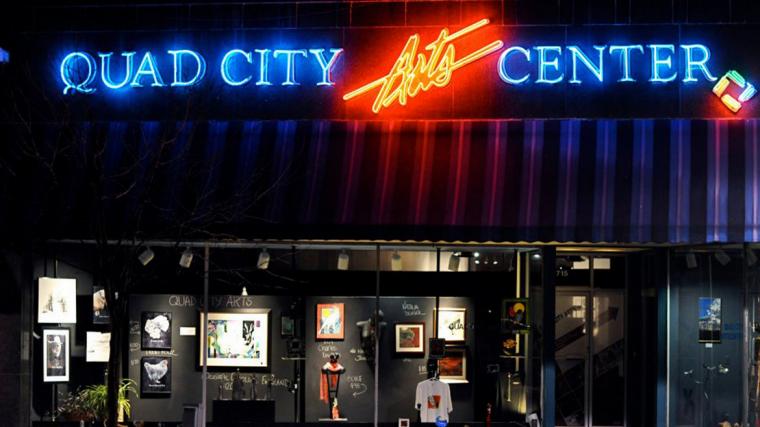 Dawn Wohlford-Metallo, Visual Arts Director for Quad City Arts, discusses the organization's operations at the Quad City Arts Center in Rock Island and the Quad City International Airport in Moline during this period of social distancing. We spoke on Monday, March 30.

When this all started happening, before we really began gathering the works, most of the schools we have in the exhibit were on spring break, and we thought, “Well, we'll get the artwork when the break is over.” And then when the teachers came back, the doors to their schools were locked. Most of them already had the students' artwork matted and framed, but there was no way to get to it.

But a lot of them have photos of their work, or the kids themselves have photos of their work, so I said, “Just start giving me pictures,” because we were still trying to hang the show at Quad City Arts. And then a week ago Friday, the governor of Illinois shut down Illinois, and we were like, “Oh no,” because our normal drop-off would have been that Friday and Saturday, with some of the teachers bringing in work on Monday. I thought if I could just get the show up, then I could photograph it and put it online – people wouldn't have to come to the building [to see the exhibit]. And then it was like, “Nope. Can't do that.”

So then I had to reach out to all the teachers and say, “Get me photographs of your work however you can.” And the ones that could, did. A teacher from one school even called me on Saturday night and she said the principal was going to let her in on Sunday to get the work, and so she brought it to my house on Sunday … which is just kind of crazy. But at least that let me set up the art and photograph all of that school's work. Getting the exhibit up has been a lot of “Okay, we'll try this. Okay, we'll try that. How about this?” (Laughs.)

Normally, we have about 200 pieces of art total, and this year we have 100. And we normally have about 17 schools, and now we have 13. So not everybody … but not too bad. And everyone can access it on the Web site.

We're still figuring out how we're going to do the awards online, but right now the plan is that somehow we're going to film a couple of us from Quad City Arts giving the awards, and we'll probably have a picture of the work and then we'll talk about it – something like that. And we're still hoping to go live Thursday night, which would have been our normal time. But we're just not quite sure at this minute if we're going to be able to pull it off. [April 2 update: The presentation of High School Awards is scheduled for 6 p.m. on Tuesday, April 7, and will be viewable via Quad City Arts' Facebook page.]

And something else we're doing for artists is we're planning a “quarantine show.” I already know a lot of people who are creating art with this time they've got. So hopefully, in 2021, we'll have a quarantine art show that will show artwork of people doing art right now. We haven't put the actual submission on our Web site yet, but it will go up in the next, I don't know … couple months or so. (Laughs.) We still have time. But it will be open to the public and there will be no entry fee.

How to Support Quad City Arts … and Each Other

People can always make donations, and people can also support us by sharing our Facebook posts and visiting our galleries and Visiting Artists events when things return to normal. The airport gallery is open 24 hours a day, and right now, it’s easy to visit without much risk of social interaction.

With our staff at Quad City Arts, we just feel like creativity is the perfect outlet for your feelings, your frustrations … . And people should be continuing to create. Whether it's music or poetry or writing or visual art – keep doing what you're doing, and when this is all over, we can share it all. And already, we can share it online, because a lot of people are using Facebook as a format for art. I think that's the most hopeful thing we have right now: the expression of creativity.