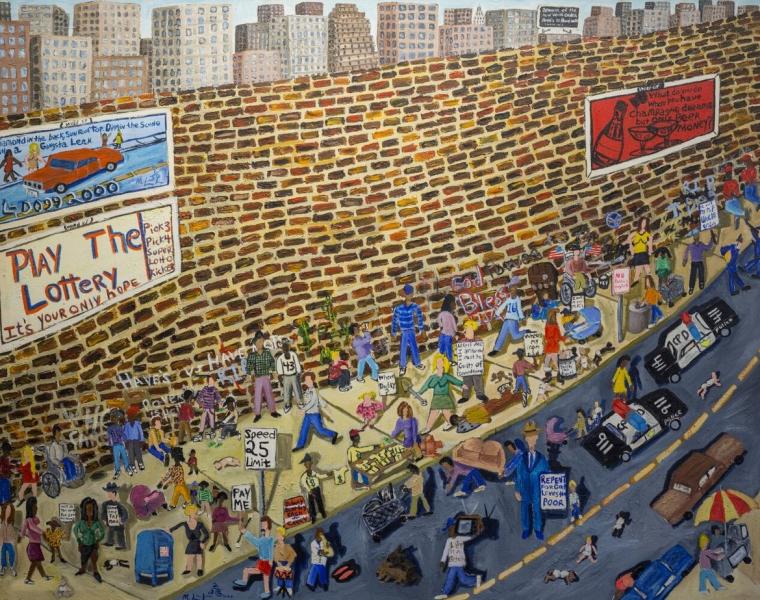 With the exhibition on view in the Davenport venue's Katz Gallery from June 25 through September 18, dozens of modern masterpieces by a wide array of artistic talents will be showcased in Urban Exposure: The American City Seen, a fascinating, thoughtful, and evocative assemblage of works on display at the Figge Art Museum.

Drawn entirely from the Figge’s vast collection, the pieces curated for Urban Exposure: The American City Seen boast a compelling array of 20th- and 21st-century artworks designed to explore the human condition within city life nationwide. Through these diverse views of urban existence, this exhibition asks viewers to recognize the experiences we all share and what it means to live and work in America. Within the exhibition, images of city life portraying Americans at work and at play, in good times and bad, will be on display, and museum guests are invited to explore generations of artists engaging with the urban American scene in assemblage, print, paint, and photography. Works by artists such as Ilse Bing, Peggy Bacon, Isabel Bishop, TJ Dedeaux-Norris, and Edward Hopper are featured, along with equally arresting pieces by noted talents including Martin Lewis, Samuel Margolies, John Gutmann, Paul D’Amato, Doris Lee, David Plowden, and William Hawkins.

The exhibition will also feature excerpts of films from the Quad Cities’ own Urban Exposure Independent Film Project, which provides a creative channel allowing kids to express themselves constructively, non-violently, and with increased confidence. The Urban Exposure Independent Film Project offers summer film programs that highlight filmmaking fundamentals, writing, directing, cinematography, acting for film, and editing. Designed to be an industry-standard instructive program, Urban Exposure recognizes and inspires emerging filmmakers from diverse backgrounds, and the program provides hands-on experience for the participants to gain essential filmmaking skills needed to communicate their thoughts and feelings through cinematic storytelling. Urban Exposure also seeks to promote diversity within the film industry by encouraging filmmaking as a career and a form of self-expression for non-traditional applicants, such as women, people of color, and other underserved populations.

Urban Exposure: The American City Seen will be on display June 25 through September 18, with regular museum hours 10 a.m. to 5 p.m. on Tuesdays through Saturdays (10 a.m. to 9 p.m. on Thursdays) and noon to 5 p.m. on Sundays. Museum admission is $4-10, and more information is available by calling (563)326-7804 and visiting FiggeArtMuseum.org.