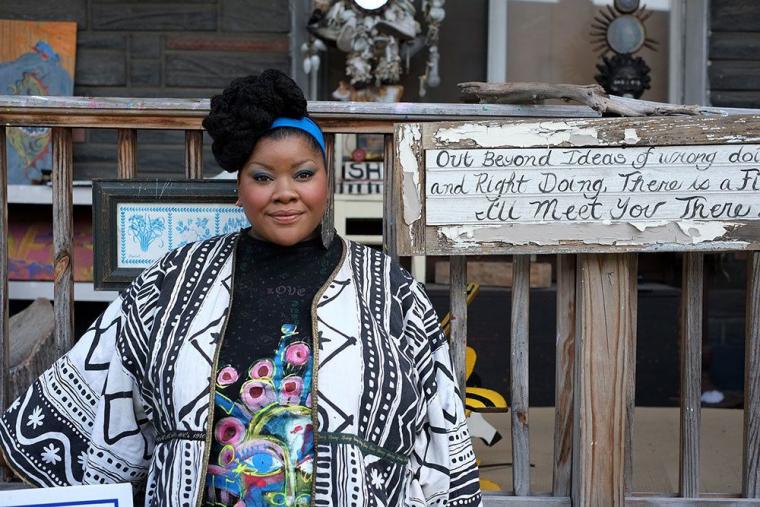 Presentation on Vanessa German at the Moline Public Library -- August 24.

Held in conjunction with the Figge Art Museum's Miracles & Glory Abound exhibition running through September 1, museum staffers will visit the Moline Public Library on August 24 for a special presentation on the exhibit's creator Vanessa German, the Pittsburgh-based artist who inspired the Los Angeles Times to rave, “Strength, physical and spiritual, exudes from her work as if audibly – a proud shout.”

A sculptor, painter, writer, activist, performer, and poet, German is also the founder of Love Front Porch and ARThouse, a community arts initiative for the historic African-American neighborhood of Pittsburgh. German's sculpture often includes assembled statues of female figures created with their heads and/or faces painted black, as well as a wide range of attached objects flowing outward, among them fabric, keys, found objects, and toy weapons. Her work is held in numerous permanent collections including the Frederick R. Weisman Art Foundation and the Crystal Bridges Museum of American Art, and has been reviewed and discussed on NPR's All Things Considered and in publications including the New York Times, Sculpture magazine, and O The Oprah Magazine. German's art has also been featured in a wide range of galleries, museums, and traveling exhibits including the Smithsonian Institution's touring African-American Art 1950-Present of 2012, and she was a 2015 recipient of the Louis Comfort Tiffany Foundation Biennial Grant.

With the artist's works also housed in permanent collections in Los Angeles, Baltimore, Cleveland, and Hartford, Connecticut, German has described herself as proud to use her art to address hate in the world while also expressing hope for the future, and frequently serves as an activist addressing issues such as gun violence and prostitution. The Figge Art Museum's current Vanessa German: Miracles & Glory Abound features the artist's "power figures," which are rooted in spirituality and ritual. In creating her art, German is actively involved with her community, using found objects that are brought to her or involving youth and adults in making her sculptures. In Miracles & Glory Abound, she creates a modern version of Emanuel Leutze's iconic painting Washington Crossing the Delaware to address contemporary issues of racism, nationalism and the mythologization of history.

Admission to the Moline Public Library's August 24 presentation on Vanessa German is free, and more information on the 10 a.m. event is available by calling (309)524-2470 or visiting MolineLibrary.com. For more on the exhibition Vanessa German: Miracles & Glory Abound, call (563)326-7804 or visit FiggeArtMuseum.org.