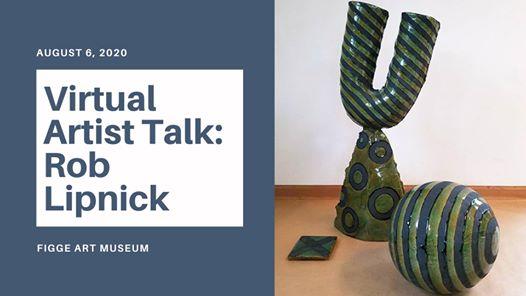 Hosted by the Figge Art Museum

Appearing in conjunction with his forthcoming ceramics exhibition Mountains, Faces, Stories, & Stacks, noted Midwestern artist and educator Robert Lipnick guides viewers through his process in a Virtual Artist Talk on August 6, with the exhibit's August 15 through November 8 engagement at Davenport's Figge Art Museum co-sponsored by the Jewish Federation of the Quad Cities and Schafer Interiors.

Throughout his long artistic career, local artist Lipnick has developed a unique system of iconography in which the symbols in his ceramics link his work to Jewish tradition, popular culture, and his personal experiences. Mountains, Faces, Stories, & Stacks will feature Lipnick’s most recent body of work, which consists of large abstract ceramic assemblages that challenge the viewer to discern meaning from their emblematic forms. These works alongside Lipnick’s more familiar ceremonial objects will provide insight into his artistic practice.

Having earned a Bachelor of Science from the University of Maryland and a Masters of Fine Arts from the University of Notre Dame, Lipnick is a well-known and -respected educator throughout eastern Iowa, and has taught for such area institutions as Scott Community College, Clinton Community College, and Marycrest College. Beyond previously exhibiting his ceramics works at the Figge, the artist has had his pieces displayed nationally at venues including the Minneapolis Art Institute and the Jewish Museum in New York City, and Lipnick remains an active proponent for art education. As he told the Great Scott Times, “Art is globalized as of this generation, which is good; that technology and diversity has changed reflecting on society for the better.” His advice for students: “Go to class, learn basic traditional techniques, get a good foundation from the beginning, and always keep your eyes and your mind open to books, research, museums and all that inspire you.”

Robert Lipnick's Virtual Artist Talk on August 6 begins at 6:30 p.m., and while the online presentation is free, advanced registration is required, with participants receiving an e-mail link to the program on the day of the event. For more information on Lipnick's program and the forthcoming Mountains, Faces, Stories, & Stacks exhibit, visit FiggeArtMuseum.org.