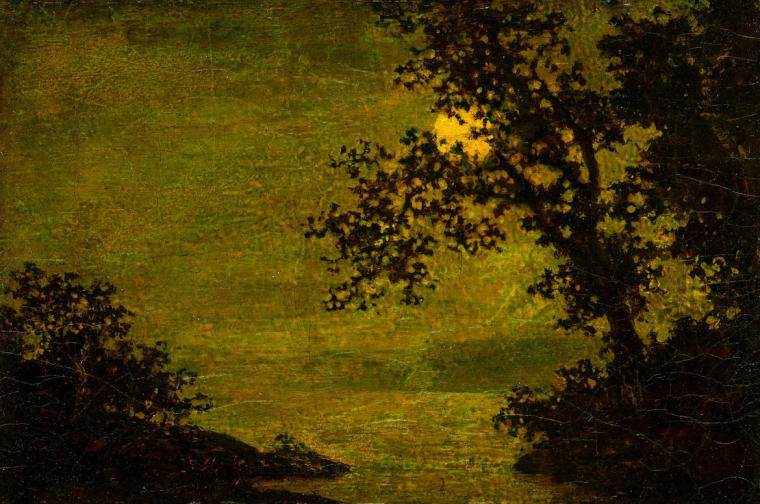 Held in conjunction with the venue's new January exhibition Blakelock: By the Light of the Moon, the Figge Art Museum's Assistant Curator Vanessa Sage will host a Virtual Curator Talk on January 21, delivering a fascinating discussion on the artist's dynamic paintings, his place in art history, and his connections to the National Academy of Design.

Born in New York City in 1847, Ralph Albert Blakelock's early paintings were highly detailed landscapes inspired by Hudson River School painters. After traveling to the American West and becoming familiar with Barbizon painters, Blakelock developed the atmospheric landscapes for which he is most commonly known. Drenched in darkness and silvery moonlight, his thickly painted landscapes have a distinctive otherworldly quality, and By the Light of the Moon will explore Blakelock’s body of work and how his interest in spiritualism is reflected in his artistic practice.

Blakelock's technique was highly personal, and through his individualistic style his paintings summoned the viewer into a luminous, almost otherworldly realm. In the majority of his paintings, space is given depth by the use of light, most often moonlight, and along with his contemporary Albert Pinkham Ryder, Blakelock was one of the most individual American painters of his time. Although one of his many paintings titled Moonlight was sold at the highest price ever paid for the work of a living American artist at that time, his rise in public notoriety – along with the increase in his art sales – never benefited his family or himself. By 1903, his works were being forged – so much so that he remains one of the most commonly forged artists in America.

“As the global pandemic has compelled many of us to connect with nature in new ways, this exhibition offers a glimpse into one artist’s connection to the land,” said Vanessa Sage, assistant curator at the Figge. “From mental illness to rapid fame to intrigue, the dramatic circumstances of Blakelock’s life often eclipse discussions about his art. This exhibition focuses on this complex artist and his work and gives a fascinating look at a life of creative experimentation and artistic resilience.”

“The paintings of Ralph Albert Blakelock continue to fascinate viewers more than one hundred years after his death,” Sage adds. “We are thrilled to share outstanding examples of his work from the museum collection, and to give our community insight into the work of this significant American artist.”

The Virtual Curator Talk with Vanessa Sage is free, but advance registration is required, and participants will receive an e-mail with a Zoom link two hours before the program begins at 6:30 p.m. on January 21. Blakelock: By the Light of the Moon will be on display January 16 through April 25, and more information on the exhibit and its companion event is available by calling (563)326-7804 or visiting FiggeArtMuseum.org.