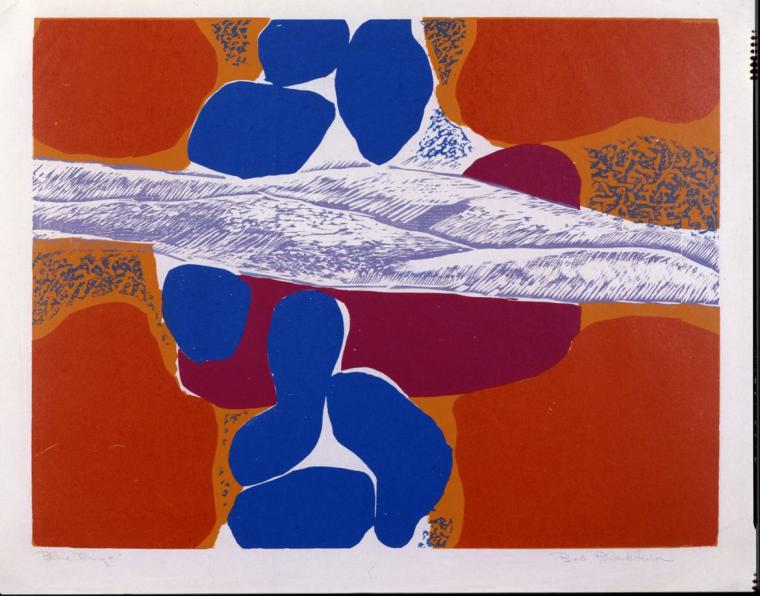 Held in conjunction with the Davenport venue's current exhibition Robert Blackburn & Modern American Printmaking, the Figge Art Museum's virtual curator talk on October 28 will feature fascinating insight provided by learned Blackburn expert Dr. Deborah Cullen-Morales, who will deliver a talk about the innovative and highly influential artist who famously challenged the idea of lithography as a high-craft process.

Blackburn, who was born in 1920 and passed away in 2003, was an influential teacher and master printer who engaged with avant-garde ideas while promoting a new collaborative approach to the printmaking medium. The Figge's Robert Blackburn & Modern American Printmaking exhibition consequently features approximately 60 artworks, including lithographs, woodcuts, and watercolors, that trace Blackburn’s artistic evolution from figurative work to highly colored abstraction. These evocative and thoughtful creations will be on display alongside the art of his contemporaries, with works by Grace Hartigan, Elizabeth Catlett, Romare Bearden, and other iconic artists with whom he collaborated included in the Davenport venue's fourth-floor gallery.

As stated at the AmericanArt.si.edu Web site for the Smithsonian American Art Museum, Blackburn “quietly but doggedly influenced the course of American art with his own graphic work. His legendary generosity and the effortless diversity of the workshop have been frequently acknowledged, as well as the impressive fact that he was the first master printer at Universal Limited Art Editions (ULAE). There he produced the initial seventy-nine editions for artists including Helen Frankenthaler, Grace Hartigan, Jasper Johns, Robert Rauschenberg, and Larry Rivers. Blackburn’s own experimental color lithography before the 'print boom' of the early 1960s was crucial. After 20 years of single-minded commitment to lithography, his talents and predilections shaped the forms of printmaking adopted by these better-known artists.”

The Smithsonian site adds, “when his graphic oeuvre is assessed, we can see why he quickly developed a reputation for complex, multi-stone color lithographic experimentation and technical excellence. His key works shift between cubistic arrangements and color abstractions. In contrast to many African American artists of his generation, Blackburn chose to sidestep the weighty issues brought to the fore by figurative work. He placed his viewers before a window and plane simultaneously, at times conjuring three dimensions but always playfully insisting on the conventions of picturing, and always referring to the sheet, the stone, and the block.”

Curator Deborah Cull-Morales is Arts and Culture Program Officer at the Andrew W. Mellon Foundation. She previously served as executive director of the Bronx Museum of the Arts; director and chief curator of the Wallach Art Gallery at Columbia University; director of curatorial programs at El Museo del Barrio; and curator of the print collection at Robert Blackburn's Printmaking Workshop. Cullen-Morales received her Ph.D. from the Graduate Center of City University of New York for her 2002 dissertation "Robert Blackburn, American Printmaker." Cullen-Morales is also a trustee of the Trust for Robert Blackburn, working in collaboration with the Elizabeth Foundation for the Art's Robert Blackburn Printmaking Workshop.

The virtual curator talk with Cullen-Morales starts at 6:30 p.m. on October 28, participation is free, and registrants will receive a Zoom link two hours before the program begins. The Robert Blackburn & Modern American Printmaking exhibition will be on display through January 9, and more information is available by calling (563)326-7804 and visiting FiggeArtMuseum.org.