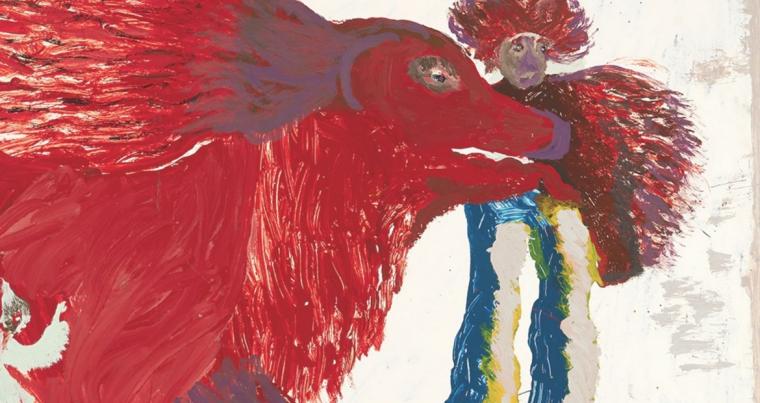 From September 22 through December 30, one of the 20th Century's most accomplished artists will enjoy a career retrospective as the Figge Art Museum houses the touring William L. Hawkins: An Imaginative Geography, the first major exhibition in more than a decade to showcase Hawkins' varied work and important examples from his favorite artistic subjects.

Although born in 1895, the Kentucky native began his professional painting career in the 1970s, first with found paint on found supports, and later with sign painter’s enamel on standard-sized Masonite boards. Hawkins explored the world through mass media and then re-presented it to the public with a uniquely expressive bravado, appropriating most of his subjects from drawings and photographic reproductions collected from newspapers, books, calendars, magazine, and other popular print media. Simplifying the forms and heightening the colors, he elaborated passages with vigorous, swirling brushwork and also taught himself sophisticated techniques such as scumbling, which he used to great effect. As he became more successful, Hawkins began to collage magazine clippings and found objects into his paintings and developed a technique he called “puffing up” a shape: building it up from the painting surface by mixing cornmeal into the enamel paint.

Drawn from important public and private collections across the United States and Europe, William L. Hawkins: An Imaginative Geography will include 52 of Hawkins’ most important paintings, some well-known pieces, and others rarely seen by the public. The exhibit will cover all of Hawkins’ favorite subject matter including cityscapes, landscapes, exotic places, animals, current events, historic scenes and religious scenes, and will also include one of his rare freestanding sculptural assemblages. Also featured are many of Hawkins’s most powerful paintings including Prudential NYC and two versions each of Ohio Stadium, Red Dog Running, Tasmanian Tiger, along with eight of the nine known versions of Hawkins’ Last Supper, one of his best-known subjects.

A reception for William L. Hawkins: An Imaginative Geography will be held at 5:30 p.m. on September 20, with Susan Mitchell Crawley's Curator Talk scheduled for 6:30 p.m.; Andrew Wallace will lead another Curator Talk for the exhibition at 6:30 p.m. on October 4. Regular museum hours are Tuesdays through Saturdays from 10 a.m. to 5 p.m. (open until 9 p.m. on Thursdays) and Sundays from noon to 5 p.m., admission is $4-7, and more information on this and other Figge exhibits, programs, and events is available by calling (563)326-7804 or visiting FiggeArtMuseum.org.