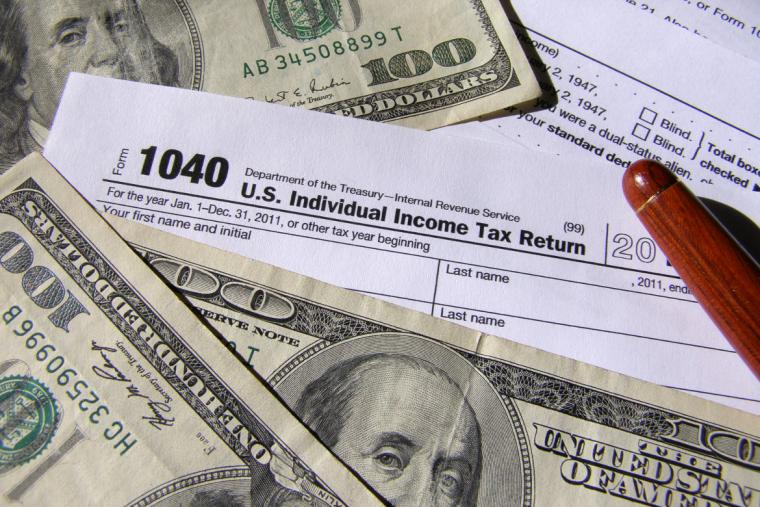 The great essayist Frank Chodorov once described the income tax as the root of all evil. His target was not the tax itself, but the principle behind it. Since its implementation in 1913, he wrote, “the government says to the citizen: ‘Your earnings are not exclusively your own; we have a claim on them, and our claim precedes yours; we will allow you to keep some of it, because we recognize your need, not your right; but whatever we grant you for yourself is for us to decide.”

He really does have a point. That’s evil. When Congress ratified the 16th Amendment on February 3, 1913, there was a sense in which all private income in the U.S. was nationalized. What was not taxed from then on was a favor granted unto us, and continues to be so.

This is implied in the text of the amendment itself: “The Congress shall have power to lay and collect taxes on incomes, from whatever source derived, without apportionment among the several States, and without regard to any census or enumeration.”

Where are the limits? There weren’t any. There was some discussion about putting a limit on the tax, but it seemed unnecessary. Only 1 percent of the income earners would end up paying about 1 percent to the government. Everyone else was initially untouched. Who really cares that the rich have to pay a bit more, right? They can afford it.

This perspective totally misunderstands the true nature of government, which always wants more money and more power and will stop at nothing to get both. The 16th Amendment was more than a modern additive to an antique document. It was a new philosophy of the fiscal life of the entire country.

Today, the ruling elite no longer bothers with things such as amendments. But back in the day, it was different. The amendment was made necessary because of previous court decisions that stated what was once considered a bottom-line presumption of the free society: Government cannot tax personal property. What you make is your own. You get to keep the product of your labors. Government can tax sales, perhaps, or raise money through tariffs on goods coming in and out of the country. But your bank account is off-limits.

The amendment changed that idea. In the beginning, it applied to very few people. This was one reason it passed. It was pitched as a replacement tax, not a new money-raiser. After all the havoc caused by the divisive tariffs of the 19th Century, this sounded like a great deal to many people, particularly Southerners and Westerners fed up with paying such high prices for manufactured goods while seeing their trading relations with foreign consumers disrupted.

People who supported it – and they were not so much the left but the right-wing populists of the time – imagined that the tax would hit the robber-baron class of industrialists in the North. And that it did. Their fortunes began to dwindle, and their confidence in their ability to amass and retain inter-generational fortunes began to wane.

We all know the stories of how the grandchildren of the Gilded Age tycoons squandered their family heritage in the 1920s and failed to carry on the tradition. Well, it is hardly surprising. The government put a timetable and limit on accumulation. Private families and individuals would no longer be permitted to exist except in subjugation to the taxing state. The kids left their private estates to live in the cities, put off marriage, stopped bothering with all that hearth-and-home stuff. Time horizons shortened, and the Jazz Age began.

Class warfare was part of the deal from the beginning. The income tax turned the social fabric of the country into a giant lifeboat, with everyone arguing about who had to be thrown overboard so that others might live.

The demon in the beginning was the rich. That remained true until the 1930s, when FDR changed the deal. Suddenly, the income would be collected but applied in a different way. It would be taken from everyone, but a portion would be given back late in life as a permanent income stream. Thus was the payroll tax born. This tax today is far more significant than the income tax.

The class warfare unleashed all those years ago continues today. One side wants to tax the rich. The other side finds it appalling that the percentage of people who pay no income tax has risen from 30 percent to nearly 50 percent. Now we see the appalling spectacle of Republicans regarding this as a disgrace that must change. They have joined the political classes that seek advancement by hurting people.

It’s extremely strange that the payroll tax is rarely considered in this debate. The poor, the middle class, and the rich are all being hammered by payroll taxes that fund failed programs that provide no security and few benefits at all.

It’s impossible to take seriously the claims that the income tax doesn’t harm wealth creation. When Congress wants to discourage something – smoking, imports, selling stocks, or whatever – it knows what to do: Tax it. Tax income, and on the margin you discourage people from earning it.

Tax debates are always about “reform" – which always means a slight shift in who pays what, with an eye to raising ever more money for the government. A far better solution would be to forget the whole thing and return to the original idea of a free society: You get to keep what you earn or inherit. That means nothing short of abolishing the great mistake of 1913.

Forget the flat tax. The only just solution is no tax on incomes ever.

But let’s say that one day we actually become safe from the income-tax collectors and something like blessed peace arrives. There is still another problem that emerged in 1913. Congress created the Federal Reserve, which eventually developed the power to create all the money that government would ever need, even without taxing.

For the practical running of the affairs of the state, the Fed is far worse than the income tax. It creates the more-insidious tax because it is so sneaky. In a strange way, it has made all the debates about taxation superfluous. Denying the government revenue does nothing to curb its appetites for our liberties and property. The Fed has managed to make it impossible to starve the beast.

Chodorov was correct about the evil of the income tax. Its passage signaled the beginning of a century of despotism. Our property is no longer safe. Our income is not our own. We are legally obligated to turn over whatever our masters say we owe them. None of this is compatible with the old liberal idea of freedom.

You doubt it? Listen to Thomas Jefferson from his inaugural address of 1801. What he said then remains true today: “What more is necessary to make us a happy and a prosperous people? Still one more thing, fellow citizens: a wise and frugal government, which shall restrain men from injuring one another, shall leave them otherwise free to regulate their own pursuits of industry and improvement, and shall not take from the mouth of labor the bread it has earned.”

Jeffrey Tucker is the director of content for the Foundation for Economic Education (FEE.org, where this article originally appeared). He is also chief liberty officer and founder of Liberty.me, distinguished honorary member of Mises Brazil, research fellow at the Acton Institute, policy adviser of the Heartland Institute, founder of the CryptoCurrency Conference, member of the editorial board of the Molinari Review, an advisor to the blockchain application builder Factom, and author of five books.