Have Our Freedoms Fallen Faster Than the Third Tower on 9/11? 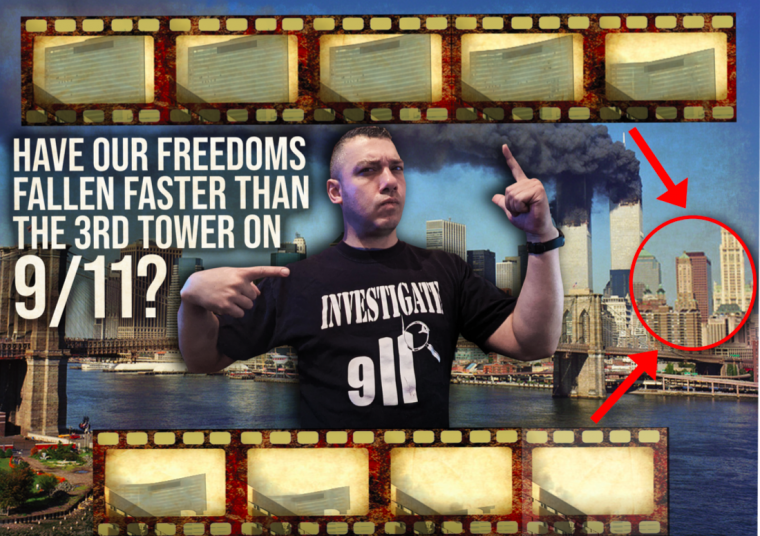 We have a real innovator, fearless journalist, and talented filmmaker now living and producing content right here in the Quad Cities. His documentary films have been watched by tens of millions of people worldwide. He has over one hundred thousand followers on multiple social-media and content platforms. He's been interviewed by the New York Times, Vanity Fair and Esquire magazines. He used to make a living from advertising sold around his content on his YouTube channel. Almost two years ago, cancel culture and advertiser-friendly censors at Google demonetized his account.

I'm talking about Jason Bermas, who is featured on the Reader's cover of this printed September edition.

In light of the 20th anniversary of the 9/11 travesty and the subsequent accelerated plunge America took into a police state, we would be remiss if we did not re-visit one of the creators of Loose Change and Fabled Enemies, the 9/11 documentary films first released from 2005 through 2009.

Please see the companion piece to this commentary, This 9/11, Revisit Jason Bermas' Critical Documentaries Loose Change and Fabled Enemies, by Reader editor, Kathleen McCarthy. And, please see the Reader's coverage of Loose Change from 2006, The Secret Histories of 9/11.

We're not alone in understanding how significant Bermas' body of work has been. The New York Times, as well as a major Hollywood producer associated with The Atlantic magazine, have both recently been trying to secure interviews and a potential docu-series with Jason.

Jason's innovations include maintaining his YouTube channel with live broadcasts, covering nearly every controversial issue and third-rail topic the “fact-checkers” lose their minds over, while in real-time converting his live-cast to a decidedly uncensored “second half of show” video hosted on the Rokfin.com platform. Bermas continues to use YouTube as the primary pond he fishes in for listeners, all the while migrating them to supporters on the new Rokfin content platform. It's a fascinating juxtaposition – watching Jason self-censor while on YouTube, then unleashing what the technocrats don't want you to hear moments later.  Watch his Rokfin channel here: Rokfin.com/JasonBermas.

We Gotta Get Outta Here

Jason grew up in upstate New York. Watch the opening segment in his critical film Invisible Empire: A New World Order Defined and you get a sincere recount of how idyllic his life was growing up. Watch even the next ten minutes of Invisible Empire, and you'll understand how the two previous 9/11 documentaries he was involved with, Loose Change and Fable Enemies, changed his life forever.

Last summer Jason, realized that the draconian magic-virus-mitigations happening in New York City were going to take over the state and eventually truly impact his and his family's way of life in ways he could not tolerate. “When I saw that the state had installed metal signs along the roadside telling citizens to mask up … metal signs … I knew I had to get out of New York.” So he ventured out to the south and Midwest to find a place to move him and his sister where his two nieces could grow up close to the way he grew up, free from tyranny.

Since Bermas is a big mixed-martial-arts (MMA) fan, he knew Pat Miletich, UFC Hall of Famer and Bettendorf native son. He had been a guest on Pat and Jeffery Wilson's podcast The Conspiracy Farm a couple times, as well. Then, while traveling in Missouri looking for the next place to live, he was watching an LFA fight Miletich was announcing. He heard Pat mention he was going to fight the famous boxer Michael Nunn at the Mississippi Valley Fairgrounds. Bermas couldn't believe there was going to be a live outdoor fight with these two legends and that people would be actually attending in person. What state was this in?! After talking to Pat about the upcoming fight, Bermas re-routed from going to Wisconsin to going to Iowa.

That's how Bermas came to Iowa. With some encouragement from Miletich, Jason moved his sister and nieces here and found a great rental in Bettendorf. He says he loves it here in Iowa, as his nieces get to lead as normal a life as possible in America right now, especially compared to New York. And he's been able to plug into the MMA scene directly, getting to announce the Caged Aggression MMA fights held periodically (and broadcast worldwide via Pay-per-view) live at the RiverCenter alongside Miletich and Jefferey Wilson.

We'll Do It Live!

Bermas is a serial broadcaster. Very few people are as surgical and can recall details from news accounts and names and dates as quickly as Bermas can. And the Rokfin.com platform seems like it was made for a gonzo-journalist such as Jason. His format is unrehearsed, unscripted, and uncensored. He will often broadcast live right from his phone as he walks around a park, or visits a protest or place of business. His walkabout rants are always concise, and packed with details that make you wonder, “How can he remember all of this information and tie it together so well on the fly like this?!”

His shows are sometimes branded The Bermas Bridage or Infowarrior. When broadcasting from in-studio, he often has live guests with dual screens, all the while navigating government documents and news-media stories online for the viewer to see while they discuss the topic of the hour. It's often an immersive multi-media experience. As one can see from the titles and content of his documentaries, the topics revolve around the tyranny and lies being perpetuated by what he calls “the predator class.”

Many wish to paint Jason as a crazy conspiracy theorist and someone who should not be taken seriously. Nothing could be further from the truth. While at this time last year, Esquire magazine tried to brand him as one of the founding fathers of Internet misinformation, Bermas is savvy enough to have recorded the hit-piece reporter's interview and makes it available at his Rokfin channel. Viewers can see for themselves this so-called reporter's close-mindedness and inability to question the official narrative, despite evidence Bermas brings right up on the screen.

Mainstream media such as the New York Times have reached out to Bermas for interviews, and in addition to the marking of time for the 20th anniversary of 9/11, and reflecting on what many call the “first Internet blockbuster,” these editors have an agenda to paint him as a Q-Anon believer/supporter. “They don't know what to do with me,” Bermas says. “I have debunked and criticized the Q movement from the beginning and my record shows it.” And despite Bermas being on-site filming at the U.S. Capitol on January 6, he is no Trump fan, and his record shows that, as well. [NOTE: NYTimes published this piece on Sep 8, 2021: How a Viral Video Bent Reality.]

The perplexing aspect for would-be debunkers of the Bermas Bridgade is that Jason's content is always fact-based and not full of conjecture and, more often than not, he is quoting mainline mainstream media or government sources themselves as he connects the dots for his viewers.

At the beginning of his film Invisible Empire, the famous filmmakers David Lynch and Kevin Smith laud the craft and the content of Loose Change, claiming the film is must-watch material that will open one's eyes. “So every place there's questions coming from this documentary,” says Lynch. “You don't have to believe everything in the documentary to still have questions come up. You look back and remember what you saw and what you were told, and you have questions." Kevin Smith sums it up with, "It's fucking riveting.”

What's even more riveting is how Bermas puts out such rich content, with such high production values, all from his computer rig in a basement in Bettendorf, Iowa. But that may soon change, as he has partnered with his friend Mike Bersten to create the QC Stream Team. The start-up business will be part professional studio for Bermas to record his own content and part teaching studio. His plan is to provide classes for young kids who want to learn the tech side of streaming their own video game play, for instance, all the way to adults who want to generate their own professional podcasts.

Ignorance Is Not Bliss If You Want to Live Free

In one of his recent videos about Israel announcing their fourth booster shot, and sharing the sad news that his aunt who was hospitalized back in New York without her regular meds, with no therapeutics provided to her, put on a ventilator and subsequently died, Jason made the following comment:

“The third booster they've announced for you here is not the only one. I wanna repeat this again and again and again for everybody out there. They told you . . like representatives of the Predator class, Bill Gates in interviews told you there would be three to five shots and then it would be much like the flu shot . . . this never ends. The more you acquiesce to their fourth industrial revolution, the predator class, universal basic income, automation-nation slavery model under medical martial law. And as reality is denied with Bernaysian slogans of slavery that the masses chant, like 'Safe and Effective,' and 'Pandemic of the Unvaccinated,' we slide into a tyranny that is very real. And, if it has not already, will infect us all. This is why we're in the situation we're in, by the way. If you don't understand 9/11, then you don't understand how we got here.”

Please see the companion piece to this commentary, This 9/11, Revisit Jason Bermas' Critical Documentaries Loose Change and Fabled Enemies, by Reader editor, Kathleen McCarthy. And, please see the Reader's coverage of Loose Change from 2006, The Secret Histories of 9/11.