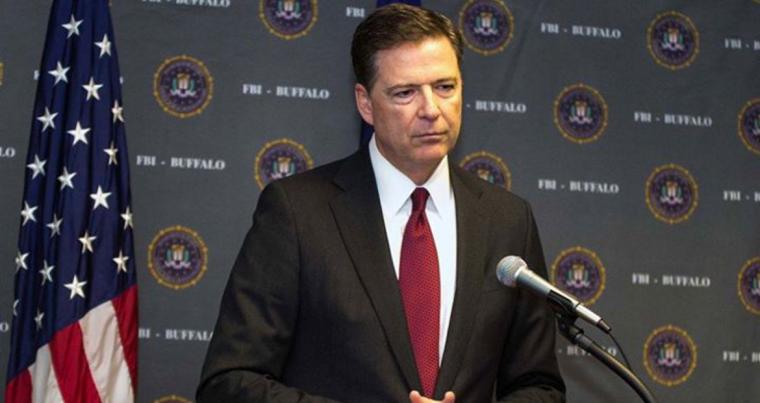 Like many people, I’m not crying that FBI Director James Comey was fired from his job before his tenure was up. As Rand Paul has noted, Comey never stopped crawling to Capitol Hill for more money, more spying authority, more power to the government, and all those things I’m against. And like many people, I find the claims of Russian meddling in the election to be a diversion from the more obvious point that voters wanted change and didn’t want Hillary Clinton.

What has struck me more is a particularly telling aspect of the way the firing of Comey was done. This is a human-interest story to me. It reveals a grim facet of human life and serves as a warning about the type of power move all of us need to be on the lookout for. What would you do if your boss muscled you into taking the fall for his or her sketchy decisions?

President Donald Trump’s memo firing Comey came with an attachment. It was a letter to him from Rod Rosenstein, the deputy attorney general of the Justice Department and the person who is technically Comey’s boss. The memo to Trump, dated the same day of the firing, carefully built a case against Comey. The implication of the memo was that Comey needed to be let go, but it stopped short of demanding it.

Rosenstein’s conclusion: “The way the director handled the conclusion of the e-mail investigation was wrong. As a result, the FBI is unlikely to regain public and congressional trust until it has a director who understands the gravity of the mistakes and pledges never to repeat them. Having refused to admit his errors, the director cannot be expected to implement the necessary corrective actions.”

It was this letter that Trump used as cover to fire someone he believed was becoming a personal enemy.

Did Trump ask Rosenstein for the letter? Most certainly.

Presidential spokespeson Sarah Huckabee Sanders admitted that Rosenstein, with Attorney General Jeff Sessions, came to see Trump in the White House the day before. Rosenstein reported to the president that Comey had come to him asking for more resources to investigate ties between Trump and Russia, a case from which Sessions had already recused himself. That left only Rosenstein to act on Trump’s behalf.

We have no access to what happened then. It was a private meeting. But it seems that Trump asked Rosenstein his opinion of how Comey was doing at his job. According to McClatchyDC.com, he rendered a negative judgment, as one is wont to do under the circumstances. Trump then asked Rosenstein to write a memo detailing his criticisms. That memo arrived the next day and Comey was fired.

The scenario is pretty clear: Trump leaned on a subordinate to provide cover for a decision he wanted to make. Trump demanded that an underling surrender his professional integrity so that the president could get his way. I can only imagine the lump that must have appeared in Rosenstein’s throat at that moment. It must have been the worst evening of his life.

I’m looking at Rosenstein’s education and career. It is a classic case, every decision made to plot the perfect, nonpartisan career in the highest reaches of government. He obtained an economics degree from the Wharton School, then moved to Harvard for a law degree. He became a Supreme Court clerk, and easily found a place at the Department of Justice, where he served under five presidents. After 27 years, he is the longest serving U.S. attorney.

Somehow he managed to do all of this while staying out of the public eye and out of partisan squabbles. To achieve that requires focus. Rosenstein has it. It’s how he earned credibility and a flawless reputation. He must protect it every day, as a matter of habit.

Then that fateful day arrived. He was nudged and answered the right way to please the president. Then the president told him to own his opinions and go public, as a way of giving the big cheese cover. What was he to do? Yes, he could have quit the job, and he probably should have. Instead, he acquiesced. After all, he built his whole career to achieve this height: deputy attorney general! Was he really going to give it all up?

Anyone who has faced such a situation in his or her professional life has to wince. It’s painful – and seedy. This is classic “bad boss” behavior. It reveals cowardice and a lack of character. The demand that subordinates cough up their professional capital for you is a move completely lacking in integrity. If the boss wants to make an unpopular decision, he should have the guts to bear the full weight of that decision, not devour the reputations of those around him as a fallback.

What’s remarkable here is that this move was unlike Trump. His usual tack is to bear the total responsibility for the success or failure of his project by making them all bear his name: Trump Tower, Trump Golf Course, Trump University, or whatever. People have criticized this about him, but I actually admire it. He gets all credit when it works, but he risks the whole of his reputation if it fails. This has been his usual way, so far as I know.

But now he has ultimate power. Maybe it has affected him. Has he come to the place in life where he is totally happy treating those around him solely as a means and not ends in themselves? Will he stop at nothing to exercise, retain, and benefit personally from his power, no matter whom it hurts? It is also possible that he always been this way, and it is just now becoming public knowledge.

The Captain and the Ship

Regardless, the private sector builds in a check on such bad-boss behavior. They don’t attract people of integrity around them. They get bad reputations. They are widely considered to be toxic personalities. But as president, Trump faces no such market test. He can get away with it because he is at the height of his power and Rosenstein himself is at the height of his profession. So why not?

The answer to that question is that it’s poor leadership. Good leaders are servants of others who bear huge burdens, even to the point of taking the fall for others. This is why there are traditions that instantiate this ethical idea. The captain is that last to take the lifeboat, even if the shipwreck was not his fault. The head coach gets fired after a losing season. The Japanese military leader falls on his sword after a losing battle.

This is just how we do it. We absolutely do not demand that subordinates fall on their swords for us. True, there is nothing illegal about this. It is just revealing of who Trump really is.

Sensing that this is a problem, Trump has since tried to walk back his excuse. “I was going to fire regardless of recommendation,” he now says. Of course this is no help to Rosenstein now. The reputation he worked a lifetime to build is now toast.

Again, I’m crying no tears for anyone in this drama. But there are lessons in it for the rest of us. It shows what kind of leader and boss not to be, and shows workers what kind of people to avoid, if at all possible.

Jeffrey A. Tucker is director of content for the Foundation for Economic Education (FEE.org, where this article originally appeared).