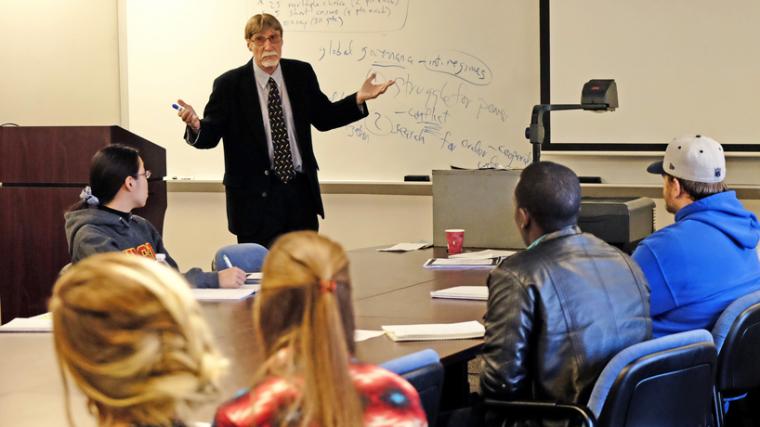 Allies, enemies, and the United States' rapidly shifting standing on the global stage will be explored in the latest presentation by the World Affairs Council of the Quad Cities (WACQC), with internationally noted speaker and author Dr. J. Martin Rochester visiting Davenport's St. Ambrose University for the March 27 lecture “Gulliver's Travails: U.S. Foreign Policy in an Age of Globalization & Global Disorder.”

A Curators’ Teaching Professor of Political Science at the University of Missouri-St. Louis, Rochester will examine American foreign policy at a time in which the United States, on paper, is more powerful than ever, yet seems to be failing in exercising influence over events virtually everywhere. He will also speak on how American leaders are currently trying to cope with an unraveling of world order in a more globalized world in this event sponsored by the WACQC, a non-partisan 501(c)(3) organization whose mission is to foster global education and international understanding within the Quad Cities and beyond.

Having earned his Ph.D. from Syracuse University, Rochester is an international relations specialist who teaches and writes in the areas of international law, organization, and politics. His 10 books include Waiting for the Millennium: The United Nations & the Future of World Order, Between Peril and Promise: The Politics of International Law, and The New Warfare: Rethinking Rules for An Unruly World, and his textbook The Global Condition (coauthored with Fred Pearson) has been taught at hundreds of universities worldwide. Rochester has also published in such scholarly journals as American Political Science Review, International Organization, and The Journal of Peace Research, and has served on the Governing Council of the International Studies Association. He is a recipient of the Chancellor's Award for Excellence in Teaching at UM-St. Louis, and in 2001 was named a Distinguished Teaching Professor by the Board of Curators of the University of Missouri.

“Gulliver's Travails: U.S. Foreign Policy in an Age of Globalization & Global Disorder” will be presented at 7 p.m. on March 27, admission is free, and more information on the World Affairs Council of the Quad Cities is available by visiting WACQC.org.