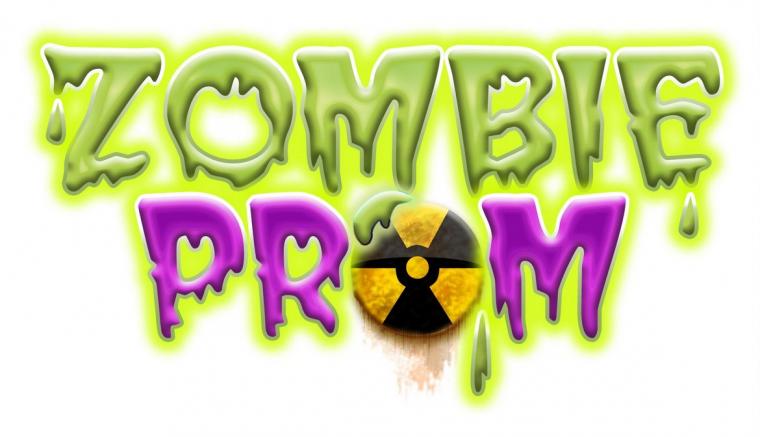 In April of 1996, a new show by the creative team of Dana P. Rowe and John Dempsey opened off-Broadway. Titled Zombie Prom, the song-filled comedy was described by the New York Times as “a girl-meets-ghoul musical set in the atomic 1950s,” and praised for the “clever variations on a theme in Mr. Dempsey’s book and lyrics” and “Mr. Rowe’s tuneful checklist of period pop styles.” But as that production’s director Philip Wm. McKinley explains, there’s a reason you may not be familiar with it.

“It was one of those frustrating things,” says McKinley. “We had these great workshops, and we opened, and people said, ‘This is gonna run forever. ... You’re gonna run as long as Little Shop of Horrors.’ And then this little show called Rent came along – kind of like this little show now called Hamilton. And it took all the focus. We were this really fun musical comedy, but if a show didn’t have the gravitas of Rent back then, it just wasn’t considered viable.”

Leave it to a musical titled Zombie Prom, however, to find a way to be reborn.

“What’s interesting,” McKinley says, “is that it now has this cult following, with hundreds of productions being done around the country.” It also has an award-winning 2006 short-film adaptation starring RuPaul, plus a feature-film version currently in development. It also, in May, was cited by TheatreNerds.com under the headline “15 Off-Broadway Musicals You Wish Moved to Broadway.” (Theatre nerds must know, huh?)

And from July 7 through 16, Zombie Prom has the distinction of being the first production in the inaugural season for the Mississippi Bend Players (MBP) – a debuting summer-theatre company, with McKinley serving as producing artistic director, whose works will be staged at Augustana College’s Brunner Theatre Center. (Full disclosue: I’m fortunate enough to be a cast member in the MBP’s forthcoming presentations of Wait Until Dark and Brighton Beach Memoirs.)

McKinley, whose credits include directing Hugh Jackman to a Tony Award in The Boy from Oz and taking over the reins for Spider-Man: Turn Off the Dark before its official Broadway opening, will again direct Zombie Prom, and says he’s glad to revisit this satiric tale of an Eisenhower-era school, a charming ingénue, and her undead beau. 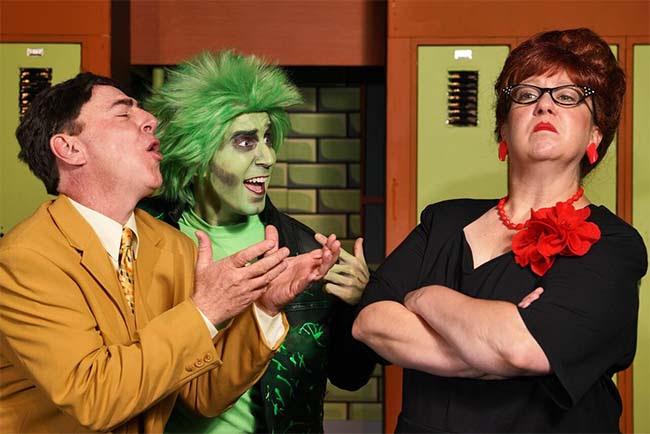 “As much as we loved it,” he says, “I think the authors and I always felt that it wasn’t quite finished. That’s one of the reasons we wanted to do Zombie Prom with the Mississippi Bend Players, because the authors wanted to try this whole new prologue; the first 12 pages are new, and they’ve re-written and adjusted lines all through it. And that’s something I would love to see this [the MBP] develop into: a regional theatre that can eventually workshop new works and send them on.

“But I also wanted to choose a piece that I thought other companies wouldn’t necessarily do,” adds McKinley, “because that’s a mission of the Mississippi Bend Players. We want to do things that aren’t well-known, or that maybe didn’t get off the ground the first time around, or that haven’t been done in recent memory. It’s important to us that we not step on the toes of other groups, and every night we’ll announce from stage what’s going on with all the companies in the area, and let people know what’s available and what they should make sure to see. We want to be an ‘addition to,’ not an ‘instead of.’”

With Zombie Prom, McKinley says the company – members of which include Associate Artistic Director Corinne Johnson (a St. Ambrose University professor) and Education Director Jeffrey Coussens (an Augustana professor) – is also fulfilling its goal of uniting for their stage productions a healthy blend of professional actors, local talents, and area students. “I think one of the biggest misunderstandings is that people think it’s Augustana College’s theatre department that’s doing the MBP. And we do have Augustana people involved” – which, beyond Augie graduate McKinley, include fellow alumni Ron May (music director) and Susan Holgersson (scenic designer), plus current theatre major Keenan Odendirk.

Adding familiar local performers including Don Denton and spouses Tom and Shelley Walljasper, choreography by frequent Circa ’21 Dinner Playhouse director Ann Nieman, and additional on- and off-stage talents, the MBP’s debut, says McKinley, “is taking a big team effort to make happen. And it’s been great to combine all these facets and put ’em together, and hopefully come up with a diamond.”

Zombie Prom runs Fridays and Saturday at 7:30 p.m. and Sundays at 4 p.m., and more information and tickets are available by calling (309)794-7306 or visiting MississippiBendPlayers.com. 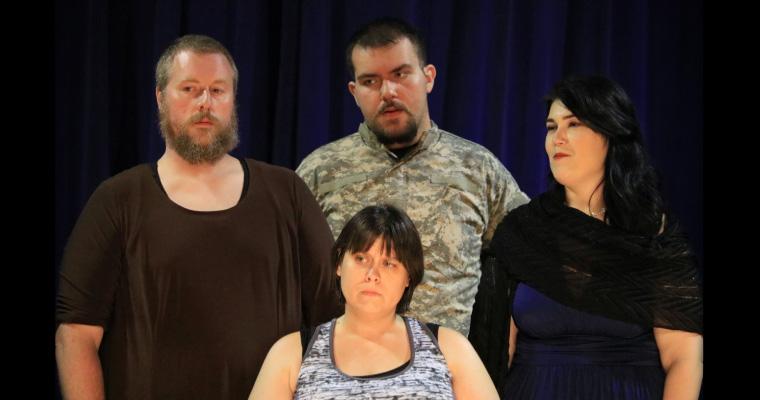 Three summers ago, in the Prenzie Players’ production of Doctor Faustus, actor Aaron Sullivan’s title character took a piece of chalk, drew a circle on the stage floor, and summoned a terrifying demon. In the Prenzie Players’ new production of The Caucasian Chalk Circle, Sullivan’s Azdak character takes a piece of chalk, draws a circle on the stage floor, and directs a young boy to stand in the center while the women fighting for his custody are instructed – Judgment of Solomon-like – to pull on his arms.

Just thought I’d mention this if you ever see Aaron Sullivan, in real life, approaching you with a piece of chalk. You may wanna head in the other direction.

Lovers of epic theatre, meanwhile, will no doubt want to head in the direction of Davenport’s QC Theatre Workshop, where the Prenzie Players will stage Bertolt Brecht’s The Caucasian Chalk Circle July 14 through 22. One of the best-known and most-celebrated of the legendary German author’s works, this revered stage parable is one of the Prenzies’ rare forays outside the realm of William Shakespeare, and an even rarer one for having been written less than a century ago. Yet fans of the verse-theatre troupe needn’t worry that the company is straying too far from its roots with Brecht’s 1948 masterpiece. The structure is still classical in nature. Numerous Prenzie veterans take part, several of them in multiple roles. And, y’know ... Sullivan draws a scary circle.

Before he does, though, The Caucasian Chalk Circle tells the tale of Grusina, a kitchen maid who, during an uprising in Russia, saves the life of a royal child inadvertently abandoned by his mother. For two years, she raises the boy as her own amidst much national strife, but is devastated when soldiers finally find the missing Michael and – at his mother’s request – Grusina is charged with kidnapping. What results is a tremendously affecting morality play exploring themes of maternal responsibility, political upheaval, thwarted romance, and law versus justice – and, as admirers of Brecht’s The Threepenny Opera will particularly appreciate, one with songs and unexpected comedy, to boot.

Wait a minute. In Doctor Faustus, Israel played the terrifying demon that Sullivan’s Faustus conjured. Now, as the accompanying photo proves, they’re being reunited. I blame that freakin’ chalk.

The Caucasian Chalk Circle runs Thursdays through Saturdays at 8 p.m. (with a “social-media preview performance” on July 13) and Sunday at 3 p.m., and more information and tickets are available by calling (563)484-4210 or visiting PrenziePlayers.com. 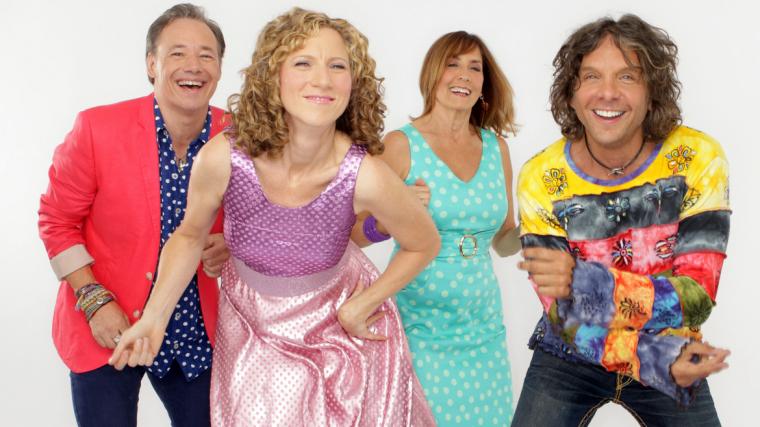 One of the most joyous sights I’ve seen in the past several years was that of my friends’ daughter Avery – who wasn’t yet two years old – marching and dancing and grinning ear-to-ear in a living-room performance of Laurie Berkner’s “We Are the Dinosaurs.” On July 12, the children’s musician herself will be performing a Music on the Lawn concert at Moline’s Deere-Wiman Carriage House. If you attend the event and see someone frantically rushing the stage, I promise there’s no need to panic; I just want to give her a hug.

As will, I’m betting, loads of area parents whose children have been delighted by the musical output of this beloved singer, songwriter, and guitarist. A France-born American whose professional career began in 1992 with the all-female rock band Lois Lane, Berkner (pictured with her Laurie Berkner Band) segued into children’s music when writing and performing songs for East Coast birthday parties in the mid-’90s, a side career that led to the release of her 1997 album debut Whaddaya Think of That? Within four years, Berkner would go on to form her own independent record company, release a pair of additional albums, receive a Parent’s Guide to Children’s Media Award, and appear on NBC’s The Today Show – a gig that would land her appearances at Carnegie Hall, Lincoln Center, and the annual White House Easter Egg Roll. Whaddaya think of that?!

Known and widely admired for her smart, up-tempo songs that helped popularize the current kindie-rock genre, Berkner’s talents have been regularly featured on several Nick Jr. TV series and showcased on the Sprout network’s animated series Sing It, Laurie! She has written two children’s books and performed in the Macy’s Thanksgiving Day Parade. And as any parent, or hanger-on of a parent, can likely tell you, the lady sure knows her dinosaurs.

Meanwhile, just how well do you know her discography? Find out by filling in the blanks to the following six out of many dozen hit songs written and/or sung by Laurie Berkner.

Admission is free to Laurie Berkner’s 6:30 p.m. Music on the Lawn concert, and more information on the evening is available by calling (309)743-2700 or visiting ButterworthCenter.com.

Thursday, July 6, through Saturday, July 8 – Cinderella ... After the Ball. Family-musical comedy in which Cinderella, Rapunzel, and Sleeping Beauty fight to save their kingdom from a villainous Pinocchio. Timber Lake Playhouse (8215 Black Oak Road). 11 a.m. $8. For tickets and information, call (815)244-2035 or visit TimberLakePlayhouse.org.