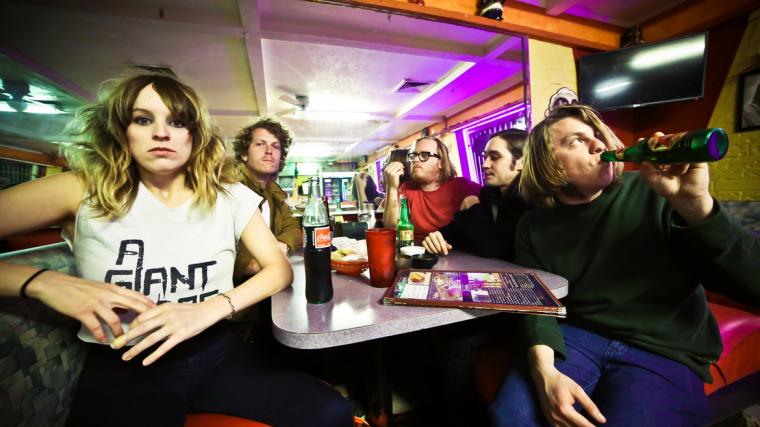 On July 3, Davenport’s Daytrotter venue hosts a pre-party for the Quad Cities’ Red, White, & Boom! fireworks display featuring a free concert by A Giant Dog – and I know what you’re thinking. I’m probably going to follow that information with a dopey remark such as “No, it’s not Clifford,” right? Or maybe I’ll make some groan-worthy mention about how it’s a band with bark and bite? Well, sorry to disappoint you, but that just proves how little you know me. I’m more than just a relentless pun machine. I’m a legitimate journalist. Canine get a little respect around here?!?

If you’re less familiar with A Giant Dog, though, the band’s growing fame and increasingly ecstatic reviews suggest you may not be for much longer. Based in Austin, Texas, this five-piece punk-rock ensemble was formed by lead singer Sabrina Ellis and guitarist Andrew Cashen in 2008, and boasts a lineup that includes Andy Bauer on guitar, Graham Low on bass, and Daniel Blanchard on percussion. The group released its album debut Fight in 2012, following it with 2013’s Bone, 2016’s Pile, and this upcoming August’s Toy. (Methinks I sense a theme in those titles.) And as Ellis stated in a recent SoundsWelcome.com interview, A Giant Dog’s stylistic influences include some of the most iconic names in the history of rock: David Bowie, Queen, Iggy Pop, and The Velvet Underground.

With the release of Pile, the musicians have even started earning the sorts of critical hosannas that greeted those artists in their prime. According to ConsequenceOfSound.net, the “tried and true adrenalized garage thrash” of A Giant Dog’s latest results in “the most complete and fully formed record of its career” and “exhibits a noticeable tightening of craftsmanship.” Pitchfork.com, meanwhile, says, “It’s a rare cocktail that mixes sloppy punk passion with precision, but A Giant Dog have both working for them.”

A word of caution, however, if you’re planning to bring your children out for some classic rock before the night’s Mississippi River fireworks. Because here’s a quote from that ConsequenceOfSound.net rave that I left out: “Pile revels proudly in seemingly everything we were brought up to be wary of in our formative years: cheap sex, drugs, death, bad relationships, and all sorts of high- and lowbrow hedonism in between.” Here’s one from that Pitchfork.com piece: “The combination of pretty melodies and the ugliest of realities is what drives Pile: It feels like the playlist for a rock-bottom party, made by people who are in a bad place, taking the opportunity to celebrate it before rising above it.”

A Giant Dog performs locally with an opening set by The Zealots, and for more information and tickets, visit Daytrotter.com. 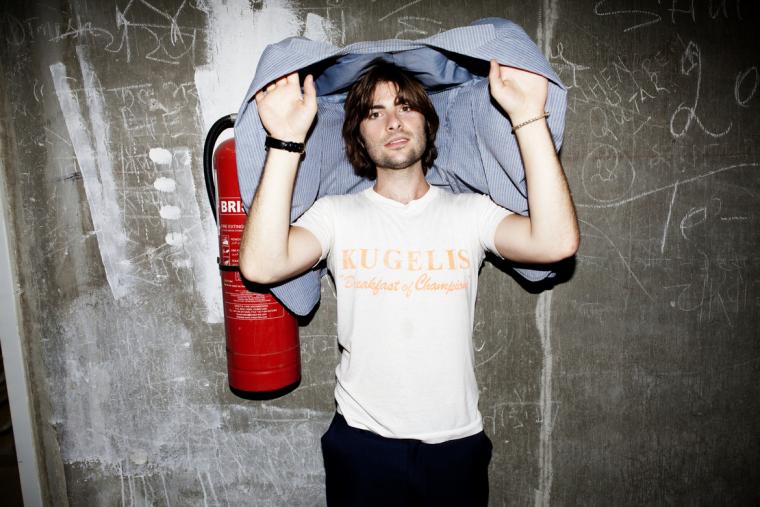 His brother is Jason Schwartzman, the star of Wes Anderson’s Rushmore and HBO’s Bored to Death. His cousin is Sofia Coppola, who won an Oscar for 2003’s Lost in Translation and best director at last month’s Cannes Film Festival. His mom is Rocky’s “Adria-a-a-an!” Talia Shire. His uncle is Francis Ford freakin’ Coppola.

Consequently, it makes perfect sense that the family’s Robert Schwartzman would grow up to be ... a musician?!? Oh, come on, Robert! With nepotistic opportunities like that, what were you thinking?!?

Perhaps that the world can always do with a little more uplifting pop rock, because as the frontman of Rooney – performing a June 24 Moeller Nights concert at Davenport’s Village Theatre – that’s just what Schwartzman has been bringing to audiences since the band’s late-20th Century beginnings.

Back in 1999, the group was actually called Ed Rooney, named after the dyspeptic principal of Ferris Bueller’s Day Off. The “Ed” was gone by the time Schwartzman’s five-piece ensemble released its self-titled full-length debut in 2003, an infectious blend of alternative rock and power pop that landed the album the number-two position on Billboard’s Heatseekers chart. Songs from Rooney eventually found their way into entertainments as diverse as the daytime drama All My Children and the video game Tiger Woods PGA Tour 2004, and Rooney itself became widely recognized for singing four of its tunes on a 2004 episode of The O.C.

Over the next six years, Rooney released two additional albums – 2007’s Calling the World and 2010’s Eureka – and toured the nation with acts including Weezer, Jane’s Addiction, OK Go, Audioslave, and Queens of the Stone Age. And after six additional years of its bandmates pursuing other musical interests, Rooney made a splashy and energetic return with Washed Away, 2016’s critical hit that found Schwartzman playing and recording with an entirely new set of collaborators.

With its lineup now filled out by Boaz Roberts on lead guitar, Sean Sobash on bass, Tyler Johnson on drums, and Kim Vi on keyboards, Rooney’s Village Theatre set will find the indie rockers performing both from Rooney’s older catalog and Washed Away, with the latter earning some of the strongest reviews in the band’s career. PopMatters.com called it an album of “much cheer and honest-to-God fun,” as well as “a lighthearted venture into sun-laced pop.” The Guardian raved about its “beautifully sea-soaked, Dennis Wilson/Jimmy Webb style.” AlternativeAddiction.com simply stated, “If you like great music, you’ll be into this.”

And the New York Times described it as “a likable, bittersweet exploration of life in drift” and “a smart, understated sex comedy,” which ... . Hang on. That’s actually from the Times’ review of Dreamland, a 2016 movie directed by Robert Schwartzman. Ha! I knew he couldn’t hide from the Coppola pull forever! Just when you think you’re out, they pull you back in!

Rooney performs with opening sets by Run River North and Twinsmith, and more information and tickets are available by visiting MoellerNights.com. 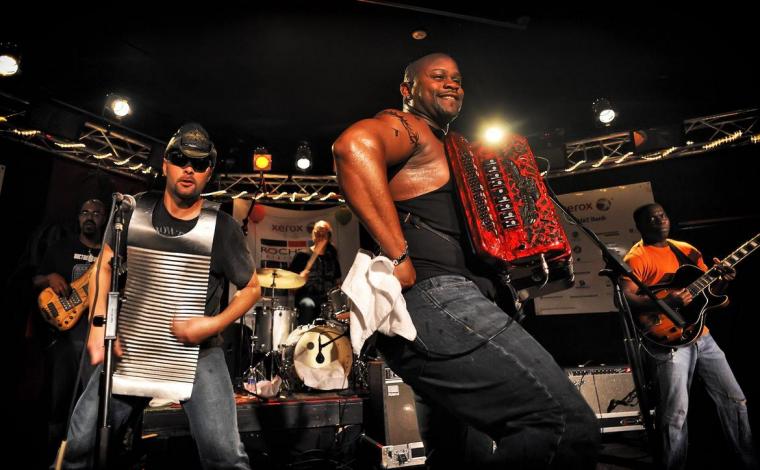 Earlier this year, longtime Mississippi Valley Blues Society member and volunteer Steve Pedigo passed away – a heartbreaking loss for all of us who knew and loved the guy. Consequently, and most deservedly, the 32nd Mississippi Valley Blues Festival – taking place at Davenport’s LeClaire Park June 30 and July 1 – will be dedicated to Steve’s memory, and I have to believe that wherever he is, our blues-lovin’ pal is smiling at the fest’s sensational lineup of scheduled artists ... and perhaps negotiating a weekend-return pass to see them perform. (I also have to believe that Steve would’ve dug that joke.)

Working backward, Saturday’s concerts begin with a 1 p.m. set with the Travis Ried Band – led by the Burlington, Iowa-based bluesman of 25 years running – and continue with the 2:30 p.m. showstoppers of the Marquise Knox Band, whose frontman has performed dozens of festivals throughout the United States and Europe. The Corey Dennison Band – favorites of the Chicago-blues scene – takes the LeClaire Park stage at 4:30 p.m., with 6:30 p.m. the time for the Hamilton Loomis Band, with its leader’s famed red guitar a gift from mentor Bo Diddley. The park will be blues-rocked at 8:30 p.m. in its set with Dana Fuchs, prized for her decades of performing and awesome growl in the 2007 Beatles tribute Across the Universe. And the day’s blues exhilaration climaxes with a 10:30 p.m. set with Dwayne Dopsie & the Zydeco Hellraisers, its leader a 2007 Grammy nominee who, in a 1999 contest, beat out 3,000 others for the title of “America’s Hottest Acordion.”

As for the Blues Festival’s Friday, its entertainment boasts a 5 p.m. set with the Zach Harris Band, winners of the 2015 preliminary round at the Iowa Blues Challenge; an 8:30 p.m. concert with the iTunes Blues chart-toppers of Reverend Peyton’s Big Damn Band; and the 10:30 p.m. evening-ender with Chicago-based slide guitarist and YouTube sensation Joanna Connor. But there’ll also be a special 6:30 p.m. treat with the River Music Experience talents of All Sweat Productions, whose latest tribute event will find a dozen-and-a-half of the Quad Cities’ finest musicians performing a blues celebration titled The 3 Kings (B.B., Albert, & Freddie).

In honor of those three blues icons and the Mississippi Valley Blues Festival, try matching these Billboard-top-20 songs with the particular Kings who got them there.

Saturday, June 24 – ARTists in Motion. Fundraiser in which Quad Cities artists create pieces throughout the evening and the audience “votes” on their favorites with cash donations split between the winner and Midcoat Fine Arts. Bucktown Center for the Arts (225 East Second Street, Davenport). 6-10 p.m. For information, call 563-424-1210 or visit Facebook.com/MidcoastFineArts.

Friday, June 23, and Saturday, June 24 – Urban Street Games. Annual competitions of physical strength and stamina sponsored by The Foundation. The District of Rock Island. $320 per team. For information, call (309)278-8029 or visit DowntownRockIsland.org.