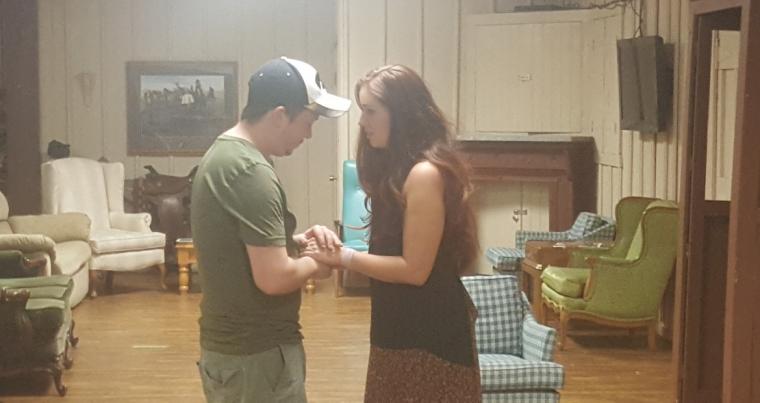 Ordinarily, you’d have to leave the interior of Playcrafters to see constellations. But on May 26 and 27, capitalized, italicized Constellations will be viewable on the upper level of the Barn Theatre, and for Moline’s venerable venue, the sight will be an unusual one indeed.

For starters, author Nick Payne’s romantic drama is the rare Playcrafters production to feature only two actors: Barn veterans Aaron Lord and Anastasiya Newkirk. It’s also an incredibly recent romantic drama, as the Tony-nominated Broadway production – which starred Oscar nominee Jake Gyllenhaal and Golden Globe winner Ruth Wilson – debuted in 2015. But breaking even further from the theatre’s norms, the show is a 70-minute one-act. It features strong language rarely (never?) before heard on the Playcrafters stage. And perhaps most significantly, you only have two chances to catch it, as Constellations serves as the debut presentation in Playcrafters’ new Barn Owl Series – one devoted to productions that will run in between performances of its previously selected 2017 schedule.

“It’s an idea we’ve been batting around for a while,” says Jacque Cohoon, president of Playcrafters’ board of directors. “Various board members have been trying to do more-contemporary pieces, but we’ve been having a hard time getting full support to put them into our seasons. There’s been some fear that our season-ticket-holders won’t like the shows, and we’ve had issues before with audience members being offended by profanity, which, you know, plays a large role in more-modern pieces. And every time we do a show that sells less than about 700 for the run, we kind of go, ‘Ugh ... was that a chance worth taking?’

“So we’ve been looking for a way to take a chance without risking going belly-up,” Cohoon continues. “And because we have a couple extra weeks in our schedule when nothing is being performed, and we’ve been looking for new ways to use the space, this seemed like something we could do, and a way to give some of our younger members a chance to do shows they’re more passionate about.”

One of those younger members is Constellations director Alexander Richardson, who recently helmed Playcrafters’ Neil Simon comedy Rumors, but whose directorial credits at his University of Illinois alma mater included far bleaker works such as Waiting for Godot and Martin McDonagh’s The Pillowman.

Constellations, says Richardson, “was a script that I read years ago and fell in love with. So I submitted it to Playcrafters’ play-reading committee” for inclusion in the main-stage season. “And they immediately shot it down,” he says with a laugh.

“It’s a wonderful script,” says Cohoon. “But the committee just didn’t think it would work as a main-stage production, and turned it down because of the language and the concept.” The show did, however, seem just right for the new series Cohoon and the board were hoping to jump-start ... even if Constellations’ concept is, admittedly, pretty far-out.

“This isn’t like any other script I’ve read,” says Richardson, “or even any story I’ve seen in film, because it’s a love story where we see all the ways a relationship fails. It’s kind of based on the scientific theory that there are infinite universes where things have happened countless different ways. And so the audience gets to see all the different ways this romance can work, but then the characters fail, and then get a little closer, and then fail, and fail, and fail ... .”

With its romantic hopefuls Roland and Marianne repeating similar lines and actions in myriad distinct ways, the New York Times wrote that the “gorgeous” and “supremely articulate” Constellations “may be the most sophisticated date play Broadway was seen.” And Richardson says he’s excited for the chance to present the area debut at Playcrafters.

And Cohoon says that if the Barn Owl Series experience of Constellations is successful, similar one-weekend runs will happen again soon, with proposed dates scheduled for July and September, and potential titles including 21st Century Tony winners Good People, Rabbit Hole, and The Normal Heart.

“I’d love, with this series, for audiences to explore new options,” says Cohoon, “or shows they’ve never heard of, or authors they might not think they’d like. To really just open themselves to the whole variety that theatre can bring, you know? I mean,” she adds with a laugh, “it can’t all be Sound of Music or Agatha Christie.”

Life on the Mississippi and Other Exhibits

Saturday, May 27, through Sunday, September 17

In the Figge Art Museum’s forthcoming exhibition Life on the Mississippi, you’ll view photographs taken in 1988 by the Dutch photojournalist Aernout Overbeeke, who, while visiting America with his wife, immortalized dozens of images of the river’s diverse places and people. But you’ll also view photographs taken by the Overbeekes’ daughter Teska, who, in 2013, retraced her parents’ path from Minnesota to New Orleans for her own photographic account of Mississippi River life. What a touching, inspiring gesture – although when people talk about “following in your father’s footsteps,” I’m not sure they mean it all that literally.

On display from June 10 through September 17, Life on the Mississippi will feature more than 50 images from the Overbeekes’ United States treks, with many of Aernot’s first published in the Dutch culture magazine Avenue, and Teska’s in the photo essay “The Mississippi 25 Years Later” that appeared in her home country’s Elle. Yet while the works are separated by the span of a quarter-century, museum guests will surely notice more similarities than differences.

As is stated on the Figge’s Web site: “Hoping to document progress and rebirth in the wake of Hurricane Katrina, Teska instead captured images that witness little change since her parents’ journey.” And between the father’s and daughter’s journeys from northern Minnesota to southern Louisiana – with Midwestern stops in locales such as Galena and Savanna, Illinois – what results in the Overbeeke’s collective touring exhibit is nothing less than “a celebration and elegy for the people and ways of life unique to the great artery that remains at the heart of the country.”

But Life on the Mississippi is only one of four fascinating new exhibits the Figge will be opening in the next two-and-a-half weeks. On display May 27 through August 27, Kara Walker: The Emancipation Approximation will boast 27 silkscreen prints of evocative silhouettes on the African-American experience. Described as “an allegory of the aftermath of the Civil War,” Walker’s contemporary-art exhibition explores the portrayal of racial stereotypes and perpetuation of negative black images, allowing viewers to fully consider both the artist’s and their own feelings on race and personal identity.

Displayed in tandem with The Emancipation Approximation is Black Dolls from the Collection of Deborah Neff, an exhibit featuring more than 100 handmade dolls created between 1850 and 1940. Along with its three-dimensional representations of “boys and girls, elegant young ladies, and determined women of mature years,” the exhibit will also showcase rare 19th- and 20th-Century photographs of dolls with their young owners, providing context for the playthings created by African Americans for both their own children and those they cared for.

And being displayed in conjunction with Life on the Mississippi is Chad Pregracke: Message in a Bottle Collection, created through the environmental work of the Quad Cities’ own Living Lands & Waters founder and CNN Hero of the Year. Collected through Pregracke’s annual cleanup campaigns along the Mississippi, Illinois, and Ohio rivers, the exhibit’s 40 bottles will be shown intact alongside images of the actual messages within – an exhibit “reflecting our own varying thoughts about the meaning of the river as an emotional touchstone.” So it’s like a romance novel come to life! Though if any of those messages are by Nicholas Sparks, or addressed to Kevin Costner, I’m gonna suspect something fishy ... .

For more information on all of the Figge’s forthcoming exhibits, call (563)326-7804 or visit FiggeArtMuseum.org. 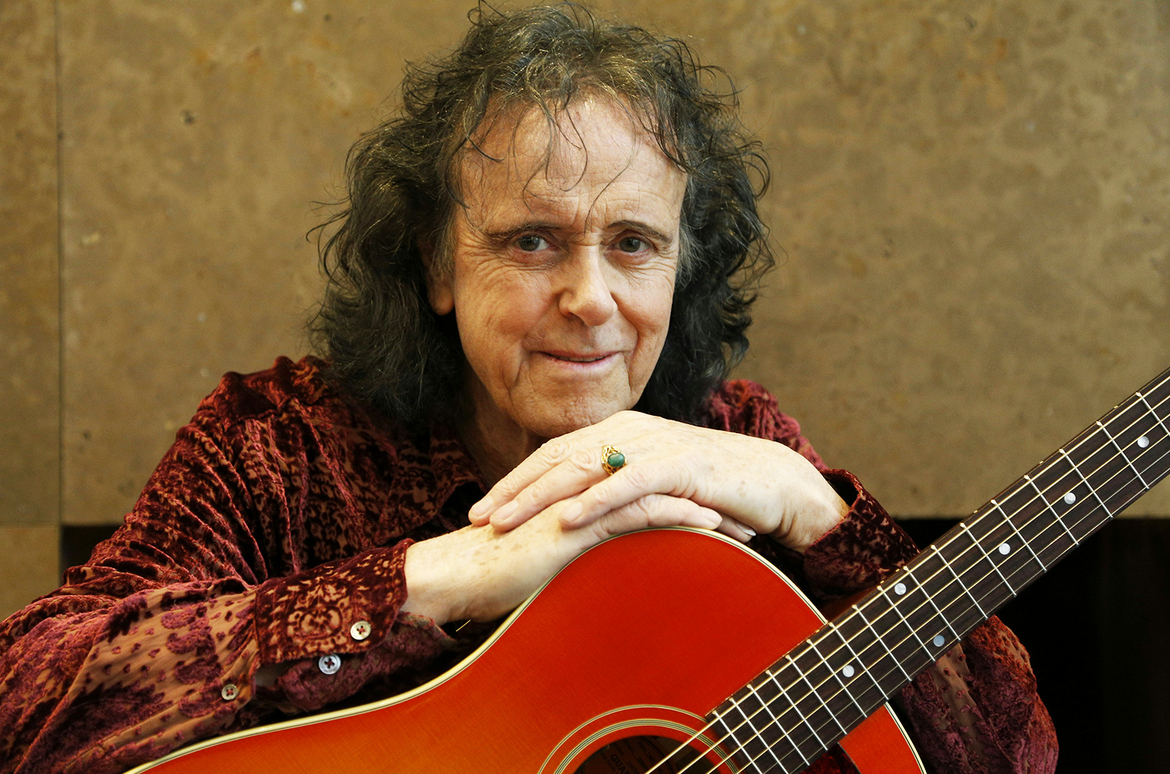 I know you went off to save the world with the universal soldier – that mellow-yellow sunshine Superman of yours. But rather than compose an epistle to Dippy, I’m writing you to ask that you see the light: I like you. No. I love you. Me-e! Me-e! I love you!

I know you were upset about those phone calls to Jennifer Juniper. And to Maria Magenta. And to Susan on the West Coast, waiting as I was to love you. But cherchez l’erreur in that list – none of them could dare to be different and rock ’n’ roll with me. Love is hot. They were not.

So be my rock ’n’ roll souljer. Join me for the Donovan concert at the Adler Theatre on June 10, and see how happiness runs in the Scotsman’s singular blend of folk, jazz, pop, and calypso stylings that have made him a musical icon for more than half a century.

Catch the wind of Donovan’s musical colours with me as I wear your love like Heaven. And sure as I’m the shaman and there is a mountain of affection awaiting you, I’ll never again speak to Laléna Atlantis. Or Celia of the Seals. Or that lay-down lassie in the newest bath guide.

And please don’t bend the enclosed photo – is this the last time you saw me? – sailing homeward on the banks o’ Doon. I’ll put it in a turquoise frame when Christmas time is here again.

Rock & Roll Hall of Famer Donovan performs at Davenport’s Adler Theatre on Saturday, June 10, and for tickets to the legendary singer/songwriter’s concert – and the chance to hear some of the artist’s 37 aforementioned hits – call (800)745-3000 or visit AdlerTheatre.com.

What Else Is Happenin’ …