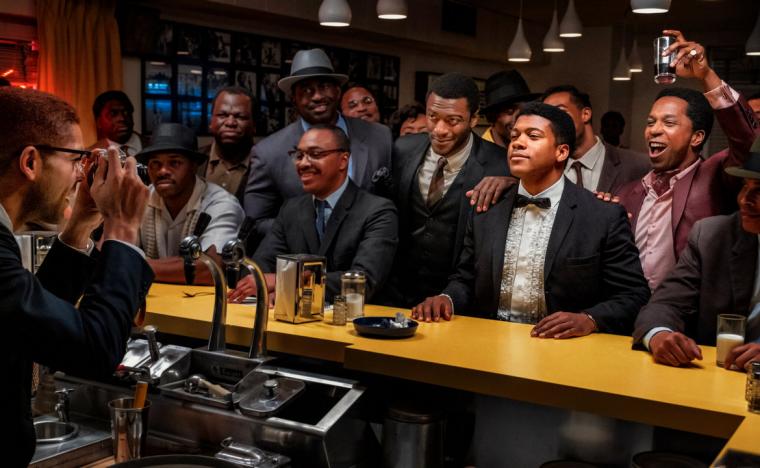 ONE NIGHT IN MIAMI …

One Night in Miami … , Regina King's debut as a feature-film director, boasts a premise that sounds like the beginning of a joke: “Malcolm X, Muhammad Ali, Sam Cooke, and Jim Brown walk into a motel room … .”

Yet while King's adaptation of screenwriter Kemp Powers' stage play is no joke, it is funny, as well as tender, and powerful, and absolutely riveting. The movie began streaming on Prime Video this past Friday, which, for me, was both awesome and kind of unfortunate. Awesome because I was able to watch this fantastic entertainment twice in two days without leaving home. Unfortunate because, for at least a while, it's going to be tough to be enthusiastic about watching anything else.

What initially gathers these iconic figures is the 1964 prizefight in which Ali (Eli Goree), then still known as Cassius Clay, defeated Sonny Liston for the heavyweight title. But as One Night in Miami … opens, the boxer's three visiting pals are also enjoying career peaks, if somewhat more complicated ones. Cooke (Leslie Odom Jr.) is a beloved pop, soul, and R&B crooner whose “You Send Me” topped the charts, although he's having trouble extending his popularity to white audiences. (The film's 1963 prelude finds Cooke unwisely opening his Copacabana set with a cover of Debbie Reynolds' “Tammy.”) Cleveland Browns fullback Brown (Aldis Hodge) is already a football legend and an aspiring movie actor, but as a painful visit to a Georgian acquaintance demonstrates, that doesn't mean he's allowed in the homes of his wealthy Southern “friends.” And Malcolm X (Kingsley Ben-Adir) is regarded as one of America's most influential and highly respected – and, to the FBI, dangerous – activists, though he's currently at a moral crossroads following his indictments of Nation of Islam leader Elijah Muhammad. After Clay's victory, the quartet heads to Malcolm's low-rent motel room for what his guests presume will be the preamble to a night-long party. As Malcolm informs them, however, this informal get-together is the party, and one that their host hopes will lead to the three men acting as spokesmen for Malcolm's new civil-rights organization.

This may not sound like much of a bash, even if Malcolm did plan for one by securing two quarts of ice cream: vanilla and … vanilla. (Says Cooke, “How's that for irony?”) Yet as the men drop their familiar public personae and the conversation begins to flow, One Night in Miami … morphs into a cinematic celebration that you never want to end. Powers' talking points are themselves rich and fascinating: the dichotomy between popular image and personal ethos; how fame can be employed in the service of higher goals; what each man “owes” to the Black community, and how those debts should be repaid. Despite the relentless chatter, though (the closest thing to an action scene finds the men taking their gab-fest to the motel roof), King's movie doesn't at all feel like a lecture or a diatribe. It feels, as it should, like a blast – our chance to be flies on the wall as four of the 20th century's most revered and profoundly gifted individuals reveal who they really are, at least in Powers' imagining. While this may be a work of “What if …?” fiction, King's subtle, elegant direction and the unimpeachable actors make it play as utterly, bewitchingly true. 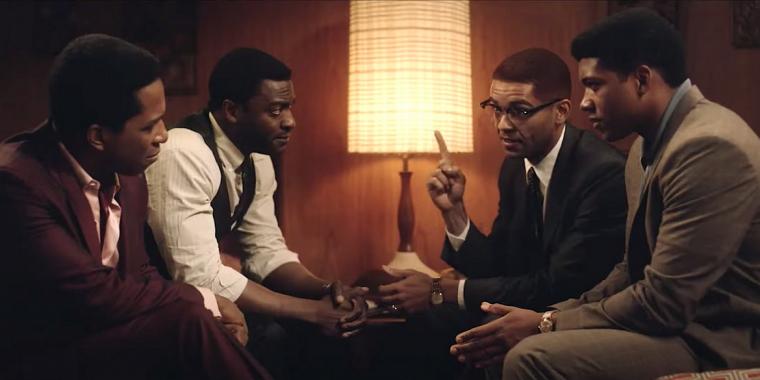 Picking a favorite performer here would (I'm guessing) be like picking a favorite among your children, so I'll simply say what my mom did whenever my siblings and I demanded an answer: I love them all equally. Odom, the Hamilton Tony winner who's blessedly allowed to sing several numbers, has an easy, natural warmth and appeal, yet seethes with righteous anger when Malcolm accuses Cooke of courting the mainstream at the expense of encouraging Black talent. (“Everybody talks about a piece of the pie,” argues Cooke. “I want the recipe.”) Hodge, with his smoldering baritone, plays Brown as content yet understandably wary, and perhaps the guest most able to recognize, and verbalize, his friends' inner demons. Goree is the pre-Ali we all know and adore – brash, boastful, unfailingly lovable even when (especially when) extolling his toughness – and also the most bashful of living legends, a big kid finally allowed to eat Thanksgiving dinner at the adult table. (Incredulously watching him bounce on a motel bed, Brown asks hyperactice Cassius, "What are you, a giant f---ing baby?") And instead of the fiery orator familiar from TV footage and Denzel Washington's 1992 Malcolm X performance for Spike Lee, Ben-Adir appears to turn his Malcolm inside out, showing us a sweetly insecure, stuttering intellectual/nerd hiding beneath an unflappable facade. These are extraordinary, beautifully lived-in portrayals, and King shows so much love for her ensemble that the film, rather miraculously, is exciting even in relative stasis.

One scene near the end, maybe the finest one in the film, finds all four men sitting on the edges of twin beds while Malcolm recounts a Cooke concert that very nearly went disastrously wrong. As Malcolm tells it (and an accompanying flashback demonstrates), a backstage saboteur caused a power failure that left the singer and his band without amplification, infuriating the audience to such a degree that it looked as though they might charge the stage. Rather than bolting, however, Cooke began to stomp his foot in rhythm, unleash a series of “Ooo!”s and “Aah!”s, and lead the crowd in an a cappella, group rendition of Cooke's signature song “Chain Gang” that ultimately won over the formerly angry masses. It's a thrilling, blissful sequence. And yet it's no more thrilling or blissful than Malcolm describing the transcendent moment, Cooke acknowledging it with humbled gratitude, and Clay and Brown devouring the story with rapt attention and immeasurable pride. A burst of emphatic (and empathetic) anger that's also a balm that calms it, One Night in Miami … is gloriously enjoyable and, at this very early date, the screen party of the year. No ice cream necessary. 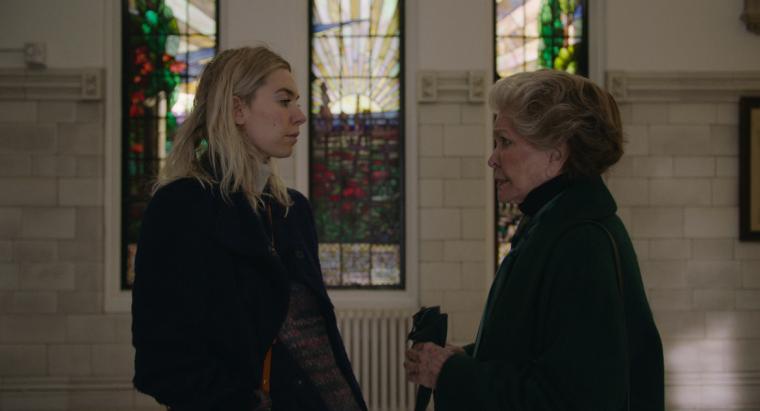 PIECES OF A WOMAN

Even though the movie began its Netflix streaming on January 7, and even though lead Vanessa Kirby and supporting Ellen Burstyn are widely predicted for Academy Award nominations in March, I initially held off on watching director Kornél Mundruczó's Pieces of a Woman after hearing about its opening scene: a nearly half-hour-long home birth, shot largely without cuts, that ended with the infant's death. (I'm generally not squeamish, but as viewing experiences go, that one sounded unbearable.) I knew, however, that I couldn't ignore the film forever, and having now seen it, I can attest that this sequence, marvelously acted and shot though it is, is just as uncomfortably wrenching as you'd imagine. I wish it wasn't also just about the only scene in the film that I actually bought.

Detailing the eight months following their newborn's passing, Mundruczó's intimate drama finds its unmarried partners Martha (Kirby) and Sean (Shia LaBeouf) contending with their grief – she by retreating further and further from the outside world, he by passive-aggressively (and sometimes simply aggressively) demanding a return to normalcy. Yet while there are lovely passages of quiet in Kata Wéber's screenplay, particularly when we're witness to actions by Martha that even she might not fully comprehend, the waters keep getting muddied with soap-opera digressions and odd distractions that don't match Mundruczó's directorial austerity. A court case against the couple's midwife (Molly Parker) is frequently referenced, but up until the shameless climax that feels like imposed Oscar bait, neither the characters nor the director appear to have much interest in it. (The awkward life-goes-on coda feels similarly affected and unmotivated.) An affair between Sean and the couple's attorney (Sarah Snook) is introduced as an afterthought and never comes close to being resolved. Ditto Sean's drug relapse after six years of sobriety. Depending on the needs of the scene, Martha's mother Elizabeth (Burstyn) is either a loving and supportive meddler or the most horrific of monsters; neither the film nor Burstyn herself seem to know for sure.

And not to be indelicate, but exactly how old is Martha's mom supposed to be? In her own ready-made Oscar clip, Burstyn delivers a lengthy, tearful, fiercely well-acted monologue about Elizabeth's infanthood in the European ghettos of World War II, and even though the performer, beautiful as ever, doesn't look all of her 88 years, the reminiscence means her character would have to be at least 75. Martha, meanwhile, looks exactly like the 32-year-old that Kirby is. So being generous about the 56-year age gap between Burstyn and Kirby, that means that Elizabeth gave birth to Martha when she was in her mid-40s? And she gave birth to Martha's significantly younger sister when she was in her 50s? I'll grant, wholly without judgment, that this could be the case. But my thinking about the age disparity at all suggests that I wasn't fully invested in this sporadically gripping, oddly meandering anti-entertainment – a frustrating drama that, per its title, works only in Pieces. 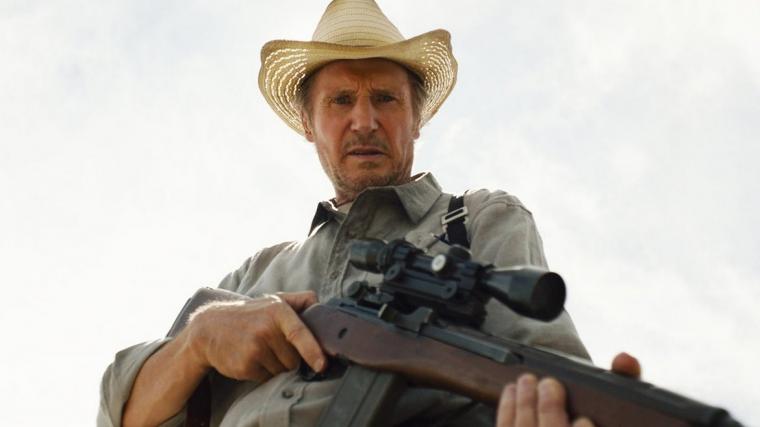 Not three months after foisting Honest Thief on us, Liam Neeson is back in grumpus-with-a-gun mode with The Marksman, the star's umpteenth descent into debilitatingly mediocre action nonsense. How on earth is this possible? Did Neeson make a stockpile of these things just in case a pandemic hit and there was nothing else to see at the cineplex?

This one is actually worse than most of Neeson's stock-in-trade, telling of a widowed Arizona rancher and former Marine who evades murderous Mexican drug-cartel enforcers while grudgingly escorting an undocumented, orphaned tween (Jacob Perez) to relatives in Chicago. The film is directed, if that's the correct word for the ensuing schmaltz and violent noise, by Million Dollar Baby producer and Trouble with the Curve helmer Robert Lorenz, and it's such a prototypical late-period Eastwood vehicle that one scene finds Neeson being handed his ranch's foreclosure papers while he's literally draped in an American flag. (Clint must be kicking himself for not getting to that image first.) It's really not worth delving into either the deadening, surprise-free Marksman or the unacknowledged casual racist at its center, with Neeson addressing the kid's chief pursuer as “Pancho” and initially speaking to his young Mexican charge with embarrassingly over-enunciated English and then complaining when the traumatized kid doesn't respond. But it is worth mentioning, I think, that the occasionally vocal, seemingly contented seniors at my screening went noticeably, uncomfortably silent when Neeson walked into a Texas gun shop and successfully bribed the clerk into selling him firearms without a background check or waiting period, just as you could hear a pin drop when Neeson proceeded to teach his prepubescent traveling companion how to load and shoot a pistol. Maybe some movie clichés that were acceptable, even adored, in years past aren't quite so welcome now. If that's true, pity the Neeson stockpile.