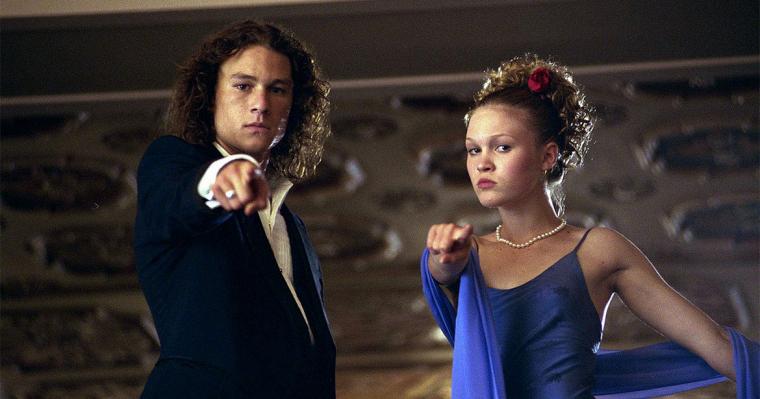 Heath Ledger and Julia Stiles in "10 Things I Hate About You" at Big Grove Brewery -- April 27.

Serving as the final public presentation in Riverside Theatre's month-long “Sonnet Project,” the Iowa City company and its neighboring Big Swing Brewery will host an outdoor screening of the iconic Shakespeare-comedy-turned-Hollywood-smash 10 Things I Hate About You, with portions of the night's sales of Easy Eddy pints benefiting both Riverside and downtown Iowa City's FilmScene venues.

Directed by Gil Junger and written by Karen McCullah Lutz and Kirsten Smithand, 10 Things I Hate About You was released in March of 1999, and quickly became beloved for helping launch the careers of co-stars Julia Stiles, Heath Ledger, and Joseph Gordon-Levitt. A modernization of William Shakespeare's late-16th-century comedy The Taming of the Shrew, Junger's film finds the Bard's tale retold in a late-1990s American-high-school setting. In this update on the classic story, new student Cameron (Gordon-Levitt) is smitten with Bianca (Larisa Oleynik), and, in order to get around her father's strict rules on dating, attempts to get bad boy Patrick (Ledger) to date Bianca's ill-tempered sister Kat (Stiles). The movie is titled after a poem written by Kat about her bittersweet romance with Patrick, and much of the filming took place in Seattle's metropolitan area, with many scenes shot at Stadium High School in Tacoma, Washington. By the end of its run, 10 Things I Hate About You grossed roughly $60 million domestically, and 10 years after its debut, the film was adapted into a television series of the same title that ran for 20 episodes and featured Larry Miller reprising his movie role as Kat and Bianca's father Walter.

Included on Entertainment Weekly's list of “The 50 Best High School Movies,” 10 Things I Hate About You was a huge hit with its chief demographic, and was nominated for seven Teen Choice Awards: Choice Comedy; Breakout Star (Stiles); Funniest Scene; Love Scene; Villain; Soundtrack; and Hissy Fit (for one of Gordon-Levitt's). The film's casting directors Marcia Ross and Donna Morong won "Best Casting for Feature Film, Comedy" at the Casting Society of America in 1999, and the following year, Stiles won the Chicago Film Critics Association Award for "Most Promising Actress," as well as an MTV Movie Award for Breakthrough Female Performance. That same year, Ledger was nominated for Best Musical Performance for his rendition of "Can't Take My Eyes Off You." On review aggregator Rotten Tomatoes, the critical consensus on 10 Things I Hate About You states that "Julia Stiles and Heath Ledger add strong performances to an unexpectedly clever script," while Film Threat's Brad Laidman raved that the movie was “pure of heart and perfectly executed.”

Big Grove Brewery's outdoor screening of 10 Things I Hate About You starts at 7 p.m. on April 27, and more information on the evening is available by visiting RiversideTheatre.org.