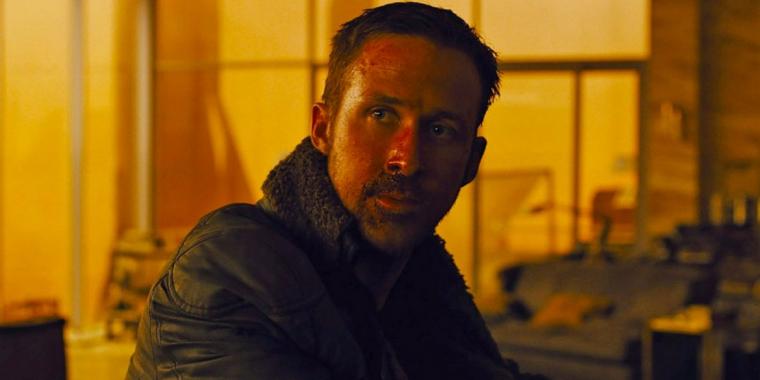 You probably know that the science-fiction epic Blade Runner 2049 opened over the weekend, and you maybe know that much hay was made in the press for the movie “merely” grossing, domestically, $32.8 million over its first three days. Does that mean that mass audiences in the United States don't necessarily want to see a grim, deliberately paced, almost completely humorless meditation on dystopia and life itself that lasts nearly two-and-three-quarter hours? Color me shocked.

For my money, though, it's their loss, because I had an absolute blast at this thing – even if I completely understood why, when the credits finally rolled after 160 minutes, my moviegoing companion was thisclose to clawing her eyes out. Yes, it's long. Yes, it's slow. Yes, it's so relentlessly downbeat that its only real laugh comes from a man pouring whiskey on the floor for his dog to lick. But I found Blade Runner 2049 overwhelming in the best possible way – a sci-fi dazzler of such intricate plotting, grand themes, visual wonder, and technical and performance-based pleasures that even though I was wiped out by the finale, I felt instantly ready to watch it again. Fun, of course, is always in the eye of the beholder, and while I don't know what it says about my personally beheld eye, Villeneuve's staggering achievement was about as much fun as I've yet had at the movies this year.

From what I understand, Warner Bros. and Sony Pictures all but sent personal representatives to film critics nationwide begging them to not spoil the film's narrative in their reviews. As someone way too under-the-radar to receive such a request, I initially considered spoiling as much as possible. (Ryan Gosling's character is really Emma Stone in disguise!) Yet while there's a ton that certainly could be revealed, there's really very little that needs to be, and I think that's true even if you haven't seen Ridley Scott's seminal Blade Runner from 1982.

In short, Blade Runner 2049 finds Ryan Gosling playing K, a synthetic-human bounty hunter, or “Blade Runner,” whose job with the LAPD is to hunt down fellow replicants – older A.I. models who've stuck around past their prescribed expiration dates. Early in the film, K locates one such replicant named Sapper Morton (an excellent Dave Bautista), who tells our hero “You've never witnessed a miracle” right before he's terminated. Upon leaving Morton's residence, K notices a dead tree that appears to have a box buried beneath it. After the box is exhumed, we learn that what's inside may, indeed, constitute a miracle, and one that K is desperate to investigate. For the movie's next two-plus hours, investigate he does.

See? Told you that would be short.

It's also, as you've no doubt surmised, wildly incomplete. But one of the many great thrills of Villeneuve's outing (with its script by Hampton Fancher and Michael Green) is its crackerjack plotting that keeps finding new ways to surprise us and further complicate an already complex mystery, from the true function of Sylvia Hoeks' replicant Luv to the out-of-tune piano with one key pressed in place slightly below the others. As he's proved in works ranging from Prisoners to Sicario to last year's Arrival, Villeneuve is a master at keeping audiences alert, and the narrative here demands and rewards careful attention. But the director is equally adept at keeping our brains active through the merest shifts in vocal inflection and camera position. His films may be slowly paced, but they're hypnotically slowly paced, and while most genre films allow you to lean back in your seat, Villeneuve's practically demand that you lean forward to catch details that, more often than not, aren't being telegraphed through obvious staging or music cues. While Blade Runner 2049's score, by Benjamin Wallfisch and Hans Zimmer, is occasionally bombastic, it's almost never employed for the spilling of secrets.

However, even if its story were less involving, the visuals alone would provide a helluva time, as this is the rare Hollywood release that could find an equally fitting home in either a cineplex or a modern-art gallery. Dennis Gassner's production design, with 2049 Los Angeles an even more neon-and-rain-filled horror show than Ridley Scott's 2019 L.A., is thoroughly astounding, and the effects are at all times magnificent, particularly in K's tender dealings with his OS girlfriend Joi (Ana de Armas), who's like a projected version of Scarlett Johansson's Samantha in Her. But if you could single out any Blade Runner 2049 participant for MVP honors, it would almost have to be cinematographer Roger Deakins, who plays awe-inspiring games with light and shadow, and whose visualization of mid-21st-Century Las Vegas, in particular, is truly mind-blowing – golden-hued yet filthy, as though generations of greed, debauchery, and excess have overtaken the atmosphere. It feels somewhat premature to discuss Villeneuve's audacious entertainment in terms of Oscars. But if 13-time nominee Deakins doesn't finally win one for this, I'm officially done with that awards body. At least until next season.

And if you've seen the trailers for Blade Runner 2049, or even its poster, you know that Harrison Ford is in it, reprising his 1982 role as Blade Runner Rick Deckard. Barring his return in the most recent Star Wars, I'm not sure I've ever been happier to see the guy. Villeneuve's latest is filled with fantastically strong portrayals, with Gosling, as he did in Drive, letting intensely well-calibrated layers of emotion bleed through his deadpan façade, and expert turns delivered by a quintet of exceptional female talents: Robin Wright, Mackenzie Davis, Carla Juri, and the aforementioned de Armas and Hoeks, the latter of whose manicure scene alone would be worth the price of admission. (Among an ample cast that includes Edward James Olmos, Barkhad Abdi, and Villeneuve veteran David Dastmalchian, the only bummer is Jared Leto, whose sadly non-threatening performance feels as overly practiced as the one he gave as the Joker in Suicide Squad.)

But arriving far later in the film than you expect him to, Ford makes a colossal impact, and adds greatly to the movie's gravitas simply by showing up and being Harrison Ford in all his late-middle-aged glory: gruff, forceful, ironic, and thunderously, beautifully present. A question regarding the original Blade Runner has lingered for more than a quarter-century now: Is Deckard himself a replicant? I ain't tellin'. I'm not entirely sure the film is tellin'. But whenever Ford is on-screen, Blade Runner 2049's powerful, startling, wholly satisfying world of artificial intelligence magically transforms into the most human place on Earth.