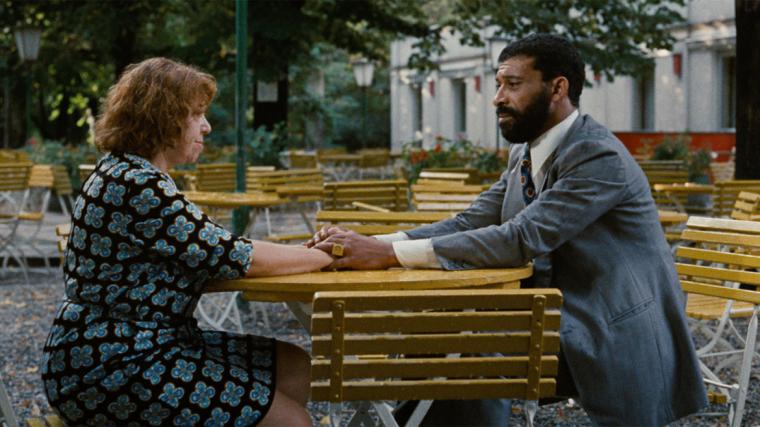 Winner of two prestigious awards at the 1974 Cannes Film Festival – the Prize of the Ecumenical Jury and the International Federation of Film Critics citation for best in-competition movie – the Rainer Werner Fassbinder classic Ali: Fear Eats the Soul enjoys a September 3 screening at Rozz-Tox as the final presentation in the 2021 Kinogarten series of acclaimed, German-themed works hosted by the Rock Island venue and Davenport's German American Heritage Center,

Starring Brigitte Mira and El Hedi ben Salem and widely considered to be one of Fassbinder's most powerful works, Ali: Fear Eats the Soul takes place an unspecified number of months after the 1972 Munich Massacre in West Germany. Emmi, a 60-year-old window cleaner and widow, enters a bar, driven in by the rain and wanting to listen to the music being played inside. A woman in the bar tauntingly suggests to Ali (Salem) – a Moroccan guest worker in his late 30s – that he ask Emmi to dance, a proposal that Emmi accepts. After they dance, the pair develops a friendship, and Ali follows Emmi home and stays at her apartment for the night. After more interaction, they start to fall in love, Ali continues to live with Emmi, and the older woman decides to visit her children in order to introduce them to her her new beau. But her daughter Krista thinks that her long-widowed mother is fantasizing about the relationship, while Emmi's tyrannical son-in-law Eugen thinks she's losing her sanity. What follows is an acclaimed romantic drama that serves, in part, as an homage to the classic melodramas of Douglas Sirk, in particular 1955's All That Heaven Allows and 1959's Imitation of Life.

The film gained critical acclaim upon its release, with its tone and Fassbinder's direction singled out as highlights. Writing for the Chicago Sun-Times, Roger Ebert gave the film four out of four stars, saying, "[Fassbinder] nudges us to get outside the movie and look at it as absurd, as black humor, as [a] comment on these people so hopelessly trapped in their dreary surroundings and by their fates. ... Is [Fassbinder] sometimes being deliberately funny? I’m sure of it." And writing for The Guardian, Peter Bradshaw called Mira and Salem's performances "superb," adding that the actors portrayed "the most purely lovable characters I have ever seen on a movie screen." Over the decades since its release, Ali: Fear Eats the Soul has continued to be praised as a modern classic, and on the review aggregator Rotten Tomatoes, Fassbinder's film currently boasts a rare approval rating of 100 percent. The Web site's critical consensus reads, "Regarded as one of the high-water marks in German New Wave cinema of the 1970s, Ali: Fear Eats the Soul is at once an intense portrayal of a relationship and a tribute to one of Rainer Werner Fassbinder's film heroes, Douglas Sirk."

Ali: Fear Eats the Soul, which will be presented in German with English subtitles, will be screened on the outdoor patio at Rozz-Tox on September 3 beginning at sundown or 8 p.m. (whichever comes first). Food and beverages will be available for purchase, the screening itself is free, and more information on the night is available by visiting RozzTox.com and the German American Heritage Center at GAHC.org.