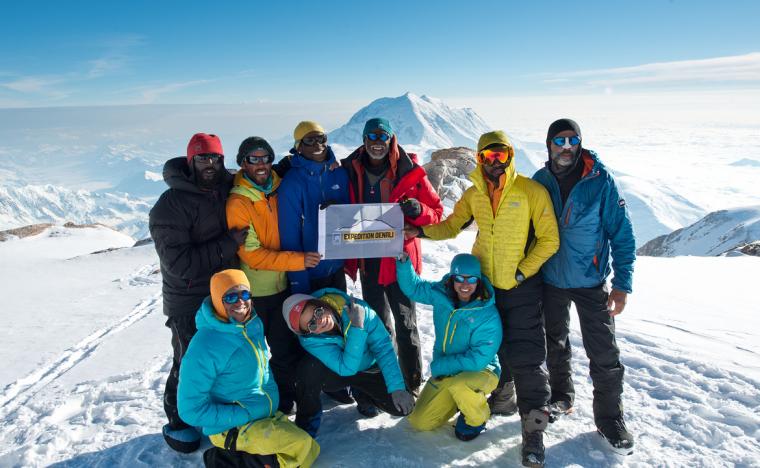 "An American Ascent" at the Figge Art Museum -- October 3.

Winner of Best Documentary and Best Director prizes at the 2015 San Diego Black Film Festival, and a Best Documentary nominee at the American Black Film Festival, the visually breathtaking An American Ascent serves as the latest presentation in River Action's annual QC Environmental Film Series, the movie's October 3 screening at Davenport's Figge Art Museum sure to demonstrate why the MAC Weekly called the work “grand, beautiful, and challenging,” as well as “a mountain of a film.”

In only a few decades, the United States will become a majority-minority nation, as people of color will outnumber today's white majority for the first time ever. Yet a staggering number of people in this soon-to-be majority do not consider the outdoors a place for them. By taking on the grueling, 20,310 foot peak of the continent's biggest mountain, nine African-American climbers, in An American Ascent, set out to shrink this Adventure Gap by building a legacy of inclusion in the outdoor/adventure community. A documentary about the first African-American expedition to climb North America's highest peak, Denali. producer/directors George Potter's and Andy Adkins' work addresses often overlooked issues of race and the outdoors as it follows the team up the mountain, chronicling the many challenges of climbing one of the world's most iconic peaks. An American Ascent is a Wild Vision/ Floating Point co-production written by Adkins and James Mills, and the noted Expedition Denali followed in the film is a project of the National Outdoor Leadership School.

The opening-night selection for the 17th Annual Roxbury International Film Festival that also screened at the White House in the summer of 2015, An American Ascent was the recipient of numerous critical raves upon its release. Writing for the MAC Weekly, Marin Stefani raved that the movie is “a deeply powerful documentary, one that is both inspiring and thrilling to watch. It showcases the incomparable virtues of mountaineering, from living in the moment to letting go of material possessions, but also the difficulties of it, like knowing when to turn back. Therein lies one of the great teachings of the film, and one that often means the difference between life and death when up in the mountains. It takes strength to turn back, especially when the summit represents the culmination of three years of preparation and 19 days of incredibly challenging climbing.”

An American Ascent will be presented at the Figge Art Museum at 2 p.m. on October 3, admission is $5, and more information on the QC Environmental Film Series is available by calling (563)322-2969 and visiting RiverAction.org.