And Then There Was Nun: “The Nun” and “Peppermint” 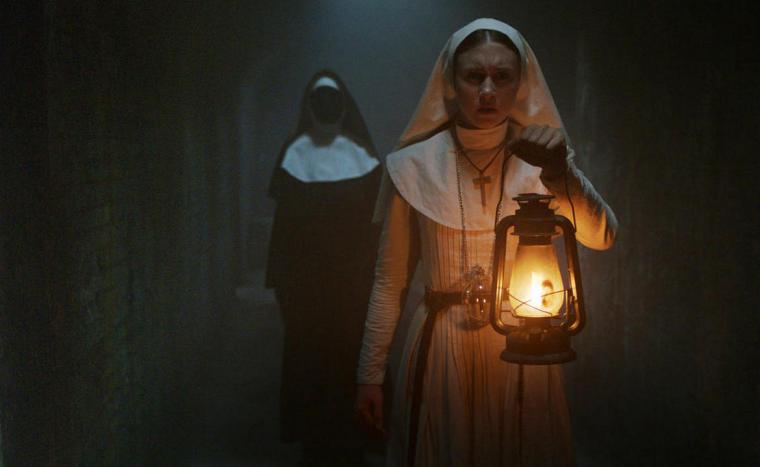 Taissa Farmiga in The Nun

There's also an outlier sequel in that aforementioned list – The Conjuring 2 – and Hardy's title character is one of that 2016 scare flick's creepier fringe figures: a spectral, ashen-faced sister of the cloth with glowing yellow eyes, razor-edged fangs, glass-cutting cheekbones, and a nose apparently augmented with a pencil sharpener. As The Nun opens, she/it proves responsible for the suicide of a novice in a cloistered abbey in 1952 Romania, and the movie finds the Vatican enlisting two of its representatives to investigate the young woman's death. One is Father Burke (Demián Bichir), a self-described “miracle hunter” and veteran exorcist. The other is Sister Irene, a novitiate on the verge of taking her vows, and an ingénue heroine played by Taissa Farmiga. Series fans will recall that the performer's real-life sister, the great Vera Farmiga, plays paranormal investigator Lorraine Warren in the Conjuring movies. (She also shows up here in the prelude and epilogue.) And Taissa, who's Vera's junior by 21 years, resembles her sister so uncannily that her mere presence is the most enticing mystery in the film. Are Irene and Lorraine somehow related? Is there some sort of spiritual connection between the two? Is there a way to find out without sitting through yet another Conjuring-universe release at some point down the road?

The answer to that last one, most likely unfortunately, is “nope.” But while The Nun, with its formulaic shock effects and authors Gary Dauberman's and James Wan's uninspired plotting, is hardly a franchise high (that would still be the 2013 original), it's hardly a low (which is the first Annabelle … for now, at least). Employing all the fog-covered moors, shadowy hallways, and candlelit underground passageways the genre demands, Hardy's prequel boasts an effectively Gothic look and feel, and the director comes through with a few truly clever creep-outs; in the best one, a buried-alive Burke desperately rings a bell for help, the noise drowned out by the ringing bells from numerous neighboring graves. And in addition to the respectably solid Bichir and the winningly empathetic Farmiga, whose eyes are ideal for fright-film popping, the movie provides welcome levity through a hearty French-Canadian farmhand portrayed by the amusing Jonas Bloquet, who looks like Jason Segel redesigned as a smirking action stud.

Yet despite featuring three agreeable leads, The Nun is distractingly underpopulated, as the only significant characters beyond that trio are the mostly silent sisters of the Romanian abbey, and you can practically count their collective lines of dialogue on the fingers of one hand. The expected “Boo!” effects are staged in ways that make them all too expected, with the only really satisfying jolt – a bait-and-switch that finds Sister Irene attacked from a direction we didn't anticipate – already given away in the movie's trailers. And although the titular monster-in-a-habit (Bonnie Aarons) is plenty frightening in closeups and cameo appearances, she's not nearly as startling given extended screen time. (Nor, for that matter, as startling as Aarons was playing David Lynch's nightmarish dumpster bum in Mulholland Dr., with her arrival in that film still the millennium's most terrifying jump-scare.) At one point, in a moment that actually drew groans at my screening, the murderous creature even gets laughably verbal, grabbing Bloquet by the neck and threatening his life with a hissed “The village will be missing its idiot!” All those sequestered nuns, and this is the one who refuses her vow of silence. 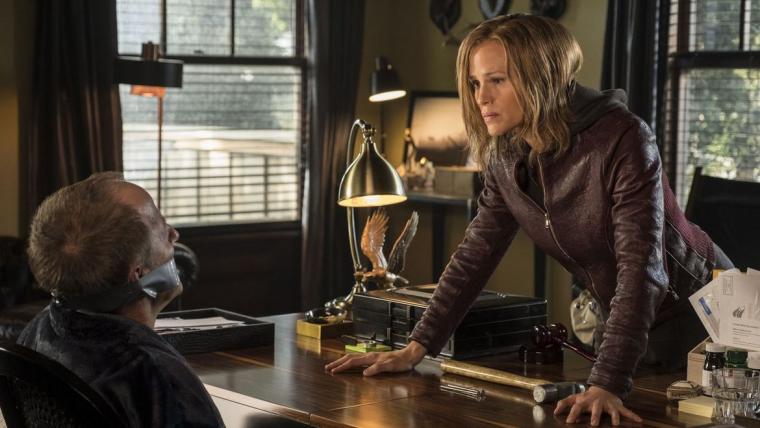 She may be a maddeningly erratic performer in terms of performance quality. But Jennifer Garner has been a first-rate ass-kicker (on TV's Alias) and an exceptional wife and mom (in Miracles from Heaven and Love, Simon), and that should have made her perfect for Pierre Morel's Peppermint, the Taken director's revenge thriller about a suburbanite who goes full Dirty Harriet after her husband and daughter are intentionally gunned down in a drive-by shooting. Sadly, though, Morel's clichéd and ludicrously plotted offering (with its script by Chad St. John) isn't worth the considerable intensity that Garner exudes, and makes its star look rather silly in the process. It's hard to blame Garner, given that not long after the murders, we're informed that her character Riley North has been on anti-psychotic medication, and nothing about the revelation suggests that it was medication prescribed as a result of her tragedy; Garner may well be playing a woman who was borderline insane even before drug lords ruined her life. But if that's the case, it's never made clear on-screen, so it just looks like Garner is bringing her traditional over-enthusiasm to a ridiculous role as an “off the grid” avenging angel ready to execute everyone from heavily tattooed thugs to negligent parents in the name of “justice.” Garner is bringing her A-game, yet it looks embarrassing in a C-minus entertainment.

There are, however, two excellent moment worth mentioning. One is a beautifully timed and staged punch to the face as Riley socks a hateful soccer mom in her jaw in the woman's doorway. The other is one of Morel's many interminable gunfights, but this one taking place in a store named “Amazing Piñatas,” and damn if those piñatas aren't legitimately amazing, accepting stray bullets with explosions of confetti that add considerable life and color to Morel's generally drab action-thriller palette. (Though it's maybe best to not delve into the inconsiderate-at-best screenwriting conceit that finds many of the film's Latino villains employed in a piñata store.) Morel's outing also benefits from the casting of John Gallagher Jr., looking uncharacteristically schlubby as a drunkard cop, Annie Ilonzeh as a grounded FBI agent, and John Ortiz as a detective not sure whether Riley should be vilified or championed. But Peppermint is still – sorry – the most flavorless of revenge sagas. In its final minutes, Ortiz's detective surveys the surrounding carnage and says, “This isn't where the story ends.” I'm prone to believe everything this ace character actor says on-screen, but please God, let him be wrong this time.