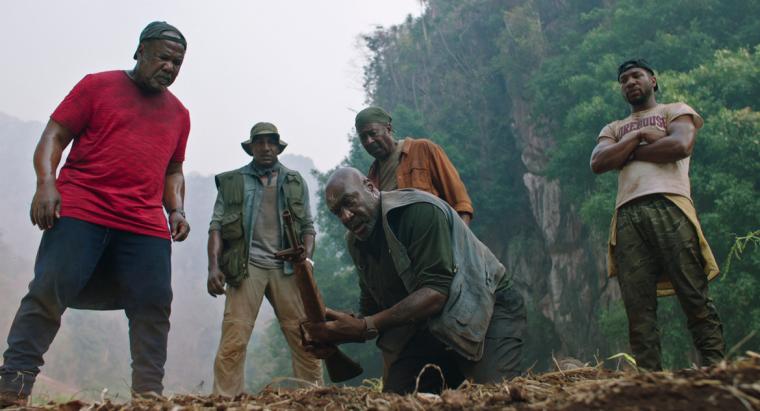 The new Spike Lee joint Da 5 Bloods, which began streaming on Netflix this past Friday, opens with unforgettable images of war atrocities and closes with exultant cries of “Black Lives Matter!”, and in between, Lee finds room for prickly humor, tragic backstory, nightclub dancing, familial bonding, a hunt for buried treasure, historical commentary, gory viscera, a handful of Marvin Gaye classics, and the images of two completely dissimilar men wearing the same red MAGA hat. Does any other contemporary filmmaker deliver quite so much bang for the buck? Da 5 Bloods runs just over two-and-a-half hours, and even if the movie does feature some clunky dialogue and awkward narrative conceits, there isn't a dull moment in it. Lee's latest is woke but also thunderously awake – so alive with ideas and homages and both presentational and emotional grandeur that it's nearly overwhelming. In truth, its only significant flaw is the manner in which we're allowed to see the thing, because no matter the size of your TV, computer, or phone screen (and please don't watch this one on your phone), Lee's accomplishment is in every way bigger.

About three quarters of the way in, a new character introduces himself and his gun-wielding companions as law-enforcement officers, and when asked to see their official badges, the man replies, “Badges?! We don't need no stinking official badges!” So yeah, you can expect a healthy dose of Treasure of the Sierra Madre here, as well as Apocalypse Now, which is evident even before our protagonists enter the Vietnamese jungle to the strains of Wagner's “Ride of the Valkyries.” Following that introductory montage of some of the worst televised horrors between 1965 and 1975, Da 5 Bloods' storyline proper begins in the present – and with hugs, laughs, and bonhomie – as four of the title figures meet in the lobby of a Ho Chi Minh hotel. Vietnam War veterans who served in the same unit and have stayed in at least moderate contact over the decades since, they're an instantly appealing and familiar group: Otis (Clarke Peters), the even-tempered one; Eddie (Norm Lewis), the gregarious one; Melvin (Isiah Whitlock Jr., master of the elongated “Shi-i-i-i-it!”), the sardonic one; and Paul (Delroy Lindo), the loose cannon with the quick smile and quicker temper. They've purportedly reunited in Vietnam to locate the remains of their fifth Blood – beloved squad leader “Stormin'” Norman (Chadwick Boseman in an extended cameo) – and bring them back to the United States. Yet while that noble gesture is certainly on the agenda, they're also hoping to bring back a trunk full of American gold bars that the men previously discovered in a downed airplane and subsequently buried until it could be safely unearthed.

With this deceptively simple plot augmented by flashbacks to the Bloods' experiences in combat (the original script by Danny Bilson and Paul DeMeo was extensively reworked by Lee and Kevin Willmot), Da 5 Bloods is something of a genre smorgasbord from the start: a buddy comedy; a heist picture, a war thriller; a soulful meditation on aging. But matters, and genres, are complicated further with the arrival of Paul's adult son David (Jonathan Majors), who joins the Vietnamese “rescue” mission against his father's wishes. In a risky yet ultimately rewarding move, Lee presents the flashbacks with Boseman as a slender youth and his four comrades, in their middle-aged creases and sagging bellies, looking exactly the way they do in 2020. While not nearly as distracting as those cringey de-aging effects employed for Scorsese's The Irishman, the conceit takes some getting used to, and eventually works because it makes psychological sense – the Bloods have returned to a place, both geographically and mentally, where their old friend stays forever young. So when David shows up and joins the Bloods in search of Norman's bones and the gold bars, he effectively becomes Norman … only this time, instead of Norman protecting his troops, it's the troops' duty to protect him. David's presence adds thematic and emotional richness, and does so without being a drain on the initial fun. 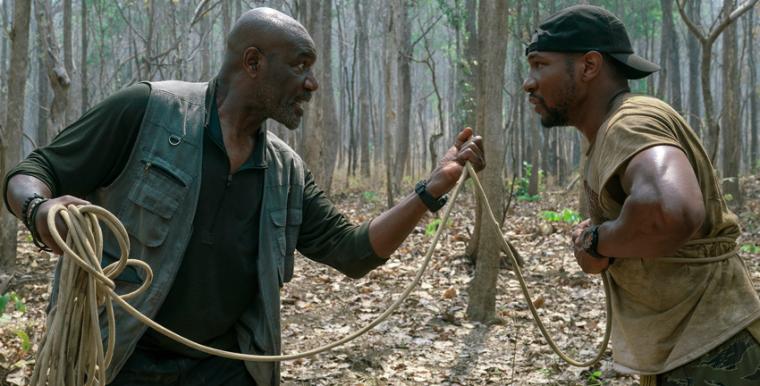 And for a very long time, what extraordinary fun it is, even if your great time is frequently suffused with dread and eventual horror. A master at planting laughs within intense set pieces (see everything from Do the Right Thing to BlacKkKlansman), Lee stages one sequence after another that entertains you while keeping you on the knife's edge of panic: a floating-marketplace scene that opens with joviality and ends with a local vociferously accusing Paul of murdering his parents; a hillside metal detection in which you can't tell if composer Terrence Blanchard's score is cheering you or merely setting you up for the kill; a heart-stopping segment that finds one of our heroes stepping on, and unable to move away from, an undetonated land mine. And the Bloods' camaraderie, too, exists in that cinematic sweet spot between affection and potential violence. At no point do you doubt the men's deep love for one another. Yet as with any families, that love can sour without warning – particularly when one of those men is Paul, a fervent Donald Trump supporter whose distrust of the Vietnamese and severe PTSD make him a ticking time bomb in a backward baseball cap. All of Da 5 Bloods' central performances are outstanding, but Lindo, who hasn't had a role this juicy since the 1990s, is nearly Shakespearean in his outsize mood vacillations, and when Paul delivers a three-minute soliloquy directly to the camera (actually just missing our eyeline, which makes the speech even more off-putting), you don't know whether to shudder or grin from ear to ear at Lindo's bravado and raw power. So you do both.

Not all of the film is as effective and impressive as Lee's artistic audacity and Lindo's impassioned portrayal. The introduction of a mine-clearance team composed of Mélanie Thierry and Lee's BlacKkKlansman co-stars Paul Walter Hauser and Jasper Pääkkönen feels too contrived by half, and also comes to very little beyond expanding the movie's body count. (This team of supposed explosives experts isn't even any help when they encounter an explosive.) Subplots involving Paul's late wife and the child that Otis never knew he fathered feel extraneous and maudlin. While the casting of Boseman is spot-on given his résumé's plethora of real-life heroes (Jackie Robinson, James Brown, Thurgood Marshall) and superheroes (Black Panther), we don't need the screenplay's added reference to Norman as “the best damn soldier who ever lived,” to say nothing of the impossible praise that finds him called “our Malcolm and our Martin.” (Who on earth could live up to that?!) And Jean Reno, playing a scurrilous fence for the missing gold, is already perfectly, suavely oily. Did his character really need to be costumed in a white linen suit – the ultimate cliché in jungle-themed outerwear for assholes?

Even the movie's missteps, though, are handled with phenomenal speed and energy, and while the movie is oftentimes as exhilarating as Treasure of the Sierra Madre or Apocalypse Now (or, in its more gruesome moments, an intellectually alert Rambo), Lee never stops reminding us – sensitively, beautifully, tragically – of the sobering pain at its heart. At the time of the Bloods' Vietnam tour, we're reminded, 11 percent of the U.S. population was black, yet black men accounted for 32 percent of the American troops serving overseas. That disparity is echoed in Da 5 Bloods' finale, as well, and as Lee did in BlacKkKlansman, the writer/director demonstrates how atrocities from our collective past continue to reverberate in our present – how our past is our present. Lee, with his most recent offering, has crafted a staggering entertainment with profoundly affecting themes, but it feels wrong to call it a movie. It feels more like a mirror.