Apocalypse Nigh: "Knowing," "Waltz with Bashir," and "Brain Dead" Knowing, director Alex Proyas' new portents-of-doom thriller starring Nicolas Cage, has an intriguing premise and some enjoyably nightmarish effects. Yet it's still such a shallow and deeply silly piece of work that, even though the movie explores numerology, determinism, and the eternal mysteries of the universe, somehow you just know it's all going to climax with Cage pointing a gun at someone and screaming, "I want my son! Now!!!" The film isn't really a disappointment - lord knows its previews made Knowing look much worse than it is - but its disconcerting blend of high drama and low camp tends to get you giggling at the exact moments you should be taking it the most seriously.

Not that, with Cage offering his usual, sullen, joyless intensity, there was much chance of taking things seriously from the outset. Proyas' modern-day sci-fi finds the actor playing John Koestler, a widowed, heavy-drinking astrophysicist at MIT who lands upon a numerically encoded transcript of the world's global disasters, recently unearthed - after a 50-year burial - from a time capsule buried at his son's elementary school. The digits appear to chronologically specify not merely the date, location, and number of fatalities of past horrors, but of future ones, as well, and this finding would no doubt be more fascinating than frightening if there weren't only three patterns left before the numerical sequence (and, theoretically, all life on Earth) ends. Can anything be done to avoid planetary demolition? Can Koestler stop shrieking long enough to get anyone to believe his rants? And what do those mute, vaguely vampiristic guys in black trenchcoats have to do with all this?

Even though Knowing begins on a note of dispiriting phoniness - the 1959 prelude finds its performers delivering the sorts of robotically fraudulent readings you'd hear in a 1959 educational film - the plot, when it kicks in, provides happy tingles of expectation, and Proyas, all throughout the movie, comes through with utterly sensational visuals. There's an eerie sequence in which Koestler's son (a too-cute Chandler Canterbury) witnesses/portends a cataclysmic forest fire, and the scenes of earthly destruction are sublimely well staged and executed; for a film in which, by its very nature, the shocks come when they're supposed to, Knowing frequently boasts considerable impact and even surprise. The movie's Big Moments are pulled off admirably. It's just all of its little moments - the ones meant to give this thriller its humanity and meaning - that border on the ridiculous.

Like M. Night Shymalan's Signs, Knowing is predicated on the notion that everything that happens in it is happening for a reason, which I guess is supposed to let the movie off the hook for scenes in which characters believe Koestler one moment and dismiss him the next, or a tremulous mother (Rose Byrne) switches her allegiances without warning, or Koestler behaves like a braying hysteric and can't fathom why no one is taking his warnings to heart. (There's even a Signs-like bit here when Cage "swings away," angrily whacking a tree with a Louisville Slugger. The audience, inappropriately but understandably, laughed.) The details behind Knowing's conceit are pretty easy to pick at - casualties resulting from war are left out of the numerical encryption, yet those resulting from hotel fires make the cut - but it's even easier to pick at the bum acting and dialogue, which pull you out of the movie's realism more than any number of storyline coincidences. There's nothing much at stake in the planet's fate here because you're not entirely convinced there are actual human beings worth saving. (A shot of a terrified moose on fire is treated with more gravity than the shots of terrified people on fire.) Despite much that's impressive, Knowing is an all-too-weightless end-of-the-world affair, and it even offers accidental relief from its tension; although, to my recollection, we're not told exactly which day will be the world's last, we do see that gas prices on that day are back to $3.89 a gallon. So we've still got a few weeks, at least. 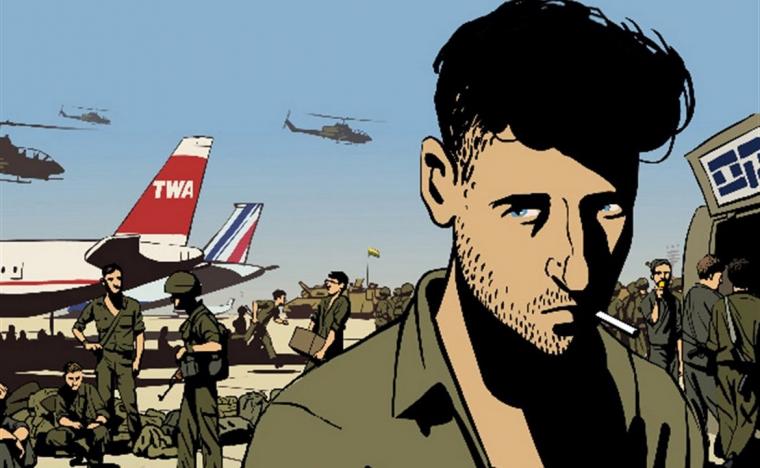 Unless our area was secretly petitioning for more animated, subtitled, Israeli documentaries on the 1982 war in Lebanon, I can't explain the current booking of Waltz with Bashir (recently Oscar-nominated for Best Foreign Language Film) at Moline's Nova 6 Cinemas. But whatever conflux of events brought director Ari Folman's accomplishment to us, I'm grateful for it: The movie is richly, hypnotically absorbing. Detailing its director's attempts to make sense of the war's senseless brutality - a war in which Folman served as a solider and, we learn, has lost nearly all memory of - the movie finds Folman retracing his past through interviews with fellow soldiers and dream imagery, and the cartoon animation buzzes with interior and exterior life. Folman's stylization creates sequences of exquisite, horrific beauty, particularly in the beachfront attack lit by cascading flares and the artillery-laden "waltz" of the film's title, yet there's also something potently emotional about the experience; the director uses the artifice of animation to distance himself from events he's perhaps unwilling to face in the flesh, and when he finally has his psychic breakthrough, his cartoon nightmares burst, instantly, into live-action ones. While the deliberate slowness takes some getting used to, the film is a strange and formidably gripping piece of work; it may have taken a while for Waltz with Bashir to get here, but better late than (as we had every reason to assume) never.

In a rather shocking turn of events, Nova 6 also debuted another new-to-the-area movie this past weekend, and I don't know which I'm more delighted by: the venue's screening of an Academy Award-nominated foreign film from 2008, or its screening of an ultra-low-budget, ultra-gruesome zombie comedy from 2007. In director Kevin Tenney's Brain Dead, a sextet of Southerners - two escaped criminals, two co-eds, and two churchgoers - attempt to evade brain-ingesting mutants in a remote shack in the woods, and it's about as cheesy, disgusting, and shamefully entertaining as you could hope for. Shot on video, it may look like the sort of thing that was filmed over a long (inebriated) weekend in someone's backyard, but despite the obvious financial restrictions, Tenney reveals a true talent for transitional shots and over-the-top exploitation comedy, the actors go at their stereotypes with cheerful gusto, and the script, by Dale Gelineau, is far wittier than it has any right to be. (After the arrival of yet another visitor to their "hidden" woodland retreat, one felon says to his comrade, "If one more person shows up, we can just lose ourselves in the crowd.")

And sweet heavens above but the movie is gross! Beginning with the arrival of the movie's plot-goosing meteor, a golf ball-sized rock that crashes directly into a fisherman's skull, the killings come neither when nor how you expect them to - I certainly didn't expect, in the first five minutes, to see a man's head lopped in half vertically - and the violence is so spectacularly, repellently outré that every gory explosion makes you gasp right before you laugh out loud. (The only bloodshed here that isn't funny comes when a woman slowly dislodges a fishing lure from her thumb.) No one could rightly call Brain Dead a good movie, but it's a sensational amount of '70s-drive-in fun - there's even a preview attached for 2005's beach-party monster flick Stomp! Shout! Scream! - and it's almost beyond inspiring to see so much horror-comedy invention considering what must have been ridiculously meager funds. For the price of one Knowing, I'd guess, you could probably fund at least 5,000 Brain Deads. Personally, I'd be okay with the trade.